Housing Starts Take a Step Back in May

Despite some promising signs in April—and on the heels of March data that was revised upward—the US homebuilding industry can’t seem to string together a few consecutive months’ worth of significant growth. Housing starts inched down in May, surprising economists and analysts who had predicted another month of gains now that we’ve entered peak building season.

Privately-owned housing authorizations inched up 0.3 percent to a rate of 1.294 million units in May. Single-family authorizations were up 3.7 percent at a pace of 815,000 units. Privately-owned housing completions were down 9.5 percent to a SAAR of 1.213 million units. Per the US Census Bureau Report, seasonally-adjusted total housing starts by region included: 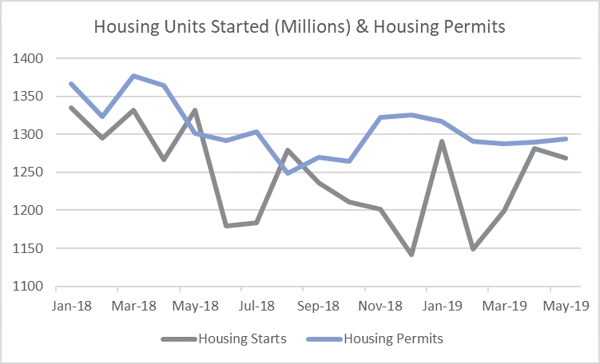 Home builder confidence dropped two points in June to 64, per the National Association of Home Builders’ (NAHB) index. The 30-year fixed mortgage rate continued to decline in May, dropping to 4.07 percent for the month, which is 11.3 percent lower than a year ago. The rate has now dropped 16.4 percent since peaking at 4.87 in November 2018.

“Single-family permits usually track new home sales but are lagging behind, either because homebuilders doubt the recent revival in sales will last - we think it will - and/or because they have too much inventory still after the disastrous drop in sales in Q4 last year,” said Ian Shepherdson, chief economist for Pantheon Macro. “If we’re right, and new home sales rise in the second half of the year, new construction will follow.”

Housing Market
May Housing Starts Plummet and Softwood Lumber Prices Follow
US homebuilding plummeted to a 13-month low in May, and prices for finished softwood lumber followed suit as the...
END_OF_DOCUMENT_TOKEN_TO_BE_REPLACED

Housing Market
January Housing Starts Falter as High Prices Stress Market
US housing starts dropped more than expected in January as many parts of the country were exposed to prolonged cold...
END_OF_DOCUMENT_TOKEN_TO_BE_REPLACED