After a disappointing May and June, US housing starts continued to lose momentum in July as the housing market cools amid surging mortgage rates and crippling inflation. "Ongoing growth in construction costs and high mortgage rates continue to weaken market sentiment for single-family home builders," said Jerry Konter, Chairman of the National Association of Homebuilders (NAHB). 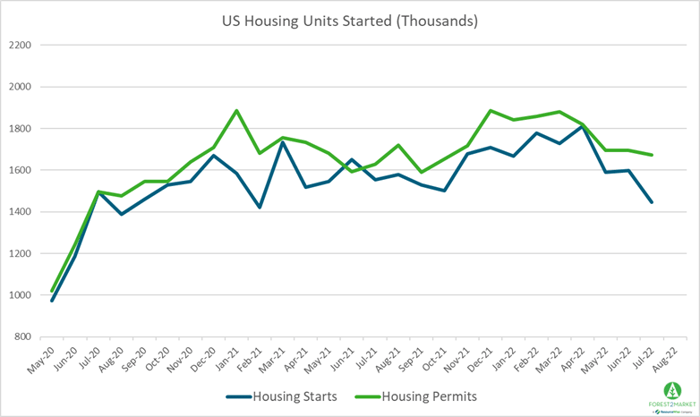 In mid-July, the 30-year fixed mortgage rate was at 5.4%, and the NAHB/Wells Fargo Housing Market Index (HMI) dropped for eight months in a row in mid-August. Yahoo! Finance noted that “…the NAHB's sentiment index fell into ‘negative’ territory for the first time since May 2020, falling to a reading of 49. Any reading for the index below 50 indicates more homebuilders view market conditions as poor than good. Monday's report also marked the 8th-straight month homebuilder sentiment declined. Take out the pandemic slump — which negatively impacted the market for two months in April and May 2020 — and the U.S. housing market hasn't been in worse shape since 2014.”

Top-line housing statistics were all “underwater” in July. The slower pace of starts in 2Q helps explain why residential investment subtracted from GDP, and why lumber prices have slumped from their highs earlier this year.

Symptomatic of plunging homebuilder sentiment, Pulte Homes is “dialing back” its spec-home starts in the face of soaring home prices and the recent increase in mortgage rates that has impacted affordability, said Pulte’s Ryan Marshall. He also noted Pulte’s cancellation rate hit 15% in 2Q, more than double the year-earlier 7%. Most worrying was his observation that the uptick in cancellations has occurred in the last 30 to 60 days.

The sentiment has spread to the existing home market, where prices seem to have topped out in many areas. Between April and June, the number of homes listed for sale has jumped by 323,000 to 1.26 million units—the highest since September 2021. Even though demand for homes in the US is cooling, “builders will remain busy for some time working down backlogs of unfilled orders, even allowing for rising cancellations,” said Richard Moody of Regions Financial.

Last month, we reported on an additional, yet noteworthy challenge in the current inflationary environment: the rapidly diverging relationship between the median new home sales price and the shelter component of the Consumer Price Index (CPI) (The shelter component represents rent and owner's equivalent rent, which together comprise roughly 1/3 of the index by weight). While new home prices are up roughly 40% cumulatively since January 2020 and rents on apartment leases also continue to skyrocket, the shelter component of the CPI is up only 9% cumulatively over the same period. In other words, 1/3 of the CPI has a lot of catching up to do with the real estate market.

However, the median new home sales price dropped by almost 10% in July and the rate of increase in the CPI shelter component is showing signs of slowing down. 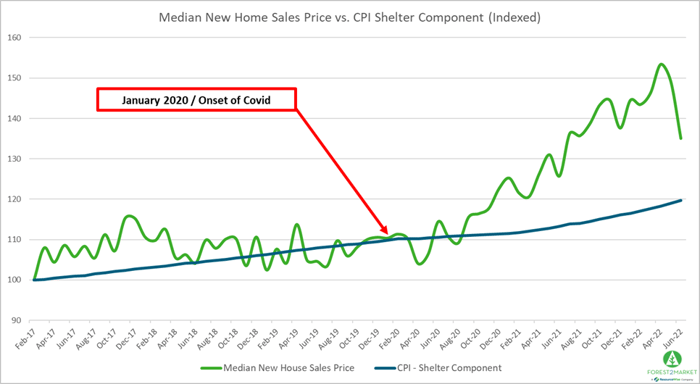 While high home prices will continue filtering into CPI in the near future - applying upward pressure on the overall index as it chases the actual market – this data suggests that the two metrics are at least moving back towards parity.

Despite the dour mood in the market, Lawrence Yun, Chief Economist at the National Association of Realtors (NAR), found a silver lining in the data: “Homebuilders are naturally very cautious about rising unsold inventory during the construction phase. But those completed homes are finding buyers within three months, which is relatively swift for the new homes market. Improving conditions within the supply chain for the delivery of items such as lumber and appliances will lessen overall uncertainty. Moreover, demographics still suggest a sizable housing shortage. If mortgage rates remain near 5%, after reaching 6% in early June, there could be renewed buyer activity and additional inventory declines. Half of existing homes can still command the full listing price.”

Housing Market
Housing Starts Plunge to Lowest Level in 19 Months
After jumping 12% in August due in part to strong demand from the multi-family construction sector, US housing starts...
END_OF_DOCUMENT_TOKEN_TO_BE_REPLACED

Lumber Prices
Southern Lumber Prices Continue to Inch Down
After jumping 12% in August due in large part to strong demand from the multi-family construction sector, US housing...
END_OF_DOCUMENT_TOKEN_TO_BE_REPLACED

Lumber Prices
SYP Lumber Prices Stabilize; Is More Volatility Around the Corner?
By late June, the price for finished southern yellow pine (SYP) lumber had tumbled 59% from its 2022 high mark of...
END_OF_DOCUMENT_TOKEN_TO_BE_REPLACED