Hurricane Harvey swept through Texas as a category 4 hurricane on Friday, August 25, 2017 and bombarded the city of Houston with more than 50 inches of rainfall. Dozens of inches of rain poured on Port Arthur and Beaumont over the following days as the storm churned towards East Texas and Louisiana. Due to the shutdown of oil refineries and chemical plants, damaged roads and ports, and widespread damage to homes, businesses and cars, the economic toll from Hurricane Harvey is estimated to be between $80[1] to $200[2] billion. Potentially making this storm the 2nd costliest natural disaster in US history behind Hurricane Katrina in 2005.

So, how will this hurricane affect the forest products markets in the Texas-Louisiana region in the near term?

To answer this question, it’s important to look back in time to review the effects on the pine pulpwood and sawtimber markets after other recent and equally-devastating hurricanes that ripped through the gulf coast region. Using Forest2Market’s proprietary Stumpage Price Database, we investigated two case studies with Hurricanes Katrina (and Rita that followed just a month later) and Ike, and the resulting influences on pine pulpwood and sawtimber stumpage prices over time. 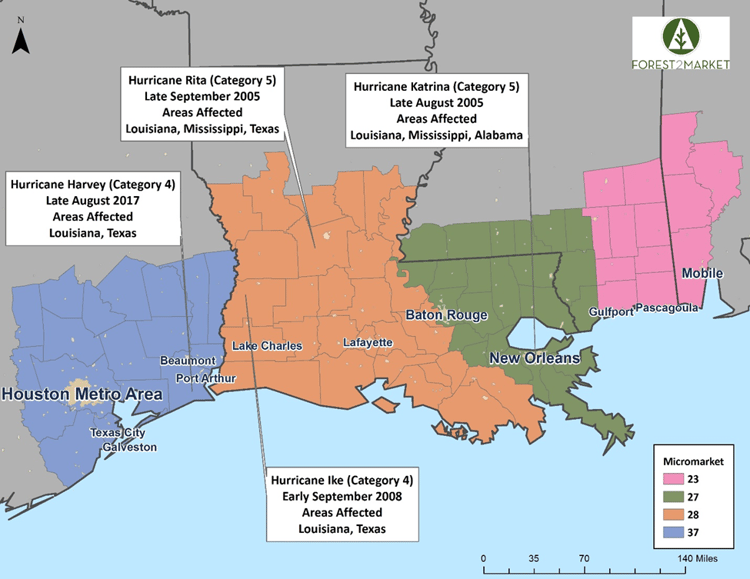 Hurricane Katrina was a category 5 storm that remains the costliest natural disaster in US history at $108 billion. Katrina made landfall in August 2005, devastating Louisiana—in particular the greater New Orleans area—and the storm destroyed levee systems and caused extreme flooding in the region. Hundreds of thousands of homes were destroyed or rendered uninhabitable. Hurricane Rita was a category 4 storm that impacted East Texas, Louisiana and Mississippi in late September 2005—just a month after Katrina’s devastating landfall. It is important to consider the combined effects of these two storms on stumpage prices since they occurred so close to each other.

In the 2nd quarter of 2005, pine pulpwood and sawtimber stumpage prices were already heading into a decline from the previous quarter. Pine pulpwood stumpage prices declined 18 percent and pine sawtimber prices declined 8 percent during that time period. When Hurricanes Katrina and Rita hit in the 3rd quarter, the combined effects resulted in price drops of 40 percent and 16 percent between the 2nd and 3rd quarters, respectively. 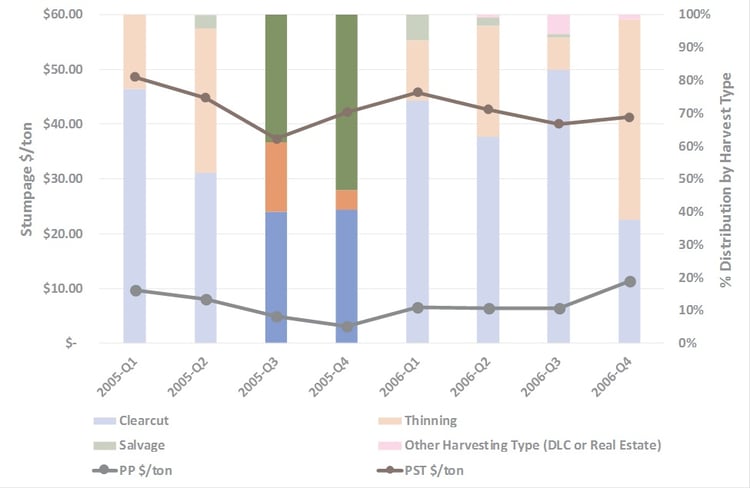 Most of the stumpage price decline for both products was due to the influx of salvage timber sold in the market. Salvage timber is the removal of trees from forested areas that have been damaged by events like flood, wildfire, severe wind, disease, insect infestation or other natural disturbances. As shown by the green bar in the Figure above, salvage timber increased from about 4 percent to 39 percent of the total timber harvested (combined total of pine pulpwood and sawtimber) in Forest2Market Micromarkets 23, 27 and 28 (Southwest Alabama, South Mississippi and South Louisiana).

During the 4th quarter, salvage timber (primarily pine pulpwood harvest) continued to increase to 53 percent of the total timber harvested, and this increase in salvage timber influenced the 38 percent drop in pine pulpwood stumpage prices. However, since pine sawtimber logs are much larger logs, less of this product needed to be salvaged. Thus, pine sawtimber stumpage prices increased 13 percent between 3rd and 4th quarters of 2005.

Hurricane Ike hit the gulf coast as a category 4 storm in late September 2008, which affected Louisiana and Texas. The storm was estimated to have caused $37.5 billion worth of damage as it swept through areas in coastal south-central and southwestern Louisiana, as well as southeastern Texas (Micromarkets 28 and 37).

In the 2nd quarter of 2008, pine pulpwood and sawtimber stumpage prices were $9.09 per ton and $34.01 per ton, respectively. When Hurricane Ike emerged during the 3rd quarter, pine pulpwood stumpage prices declined 12 percent and pine sawtimber prices declined 16 percent. Like the Katrina case study, the total distribution of salvage timber harvest increased from 0 percent in 2Q2008 to 27 percent in 3Q. 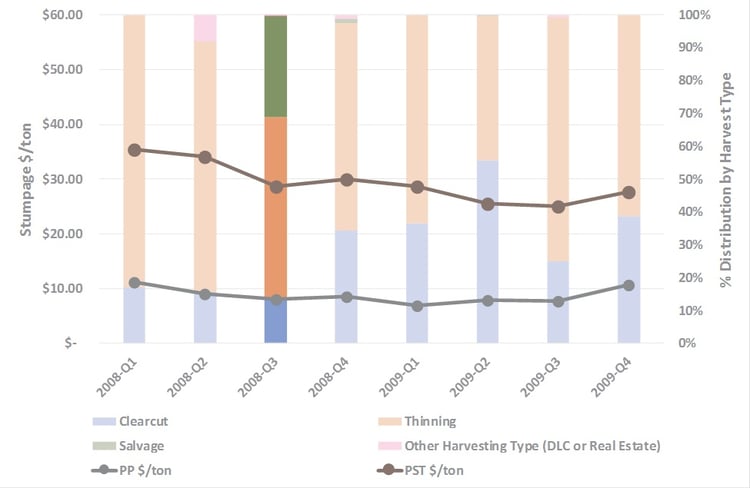 As Texas continues to recover in the wake of Hurricane Harvey’s destruction, Louisiana and Texas markets will see an upsurge of salvage timber harvested over the course of the next couple of months. Therefore, it is highly likely that both pine pulpwood and sawtimber average stumpage prices will decline throughout the remainder of the 3rd quarter and even perhaps into the 4th quarter. However, over the course of the next year and based upon recent historical data and trends, stumpage prices will likely rebound and follow an increasing trend. 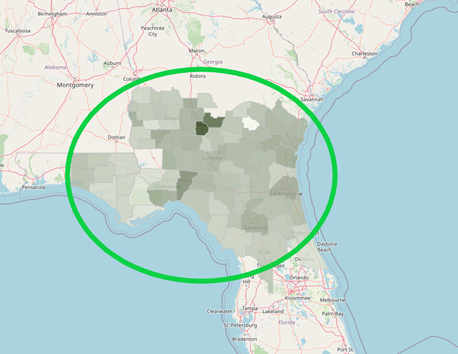 Timber Prices
Pulpwood Prices in Stressed Florida/Georgia Market Surge to Record Highs
In June 2020, we wrote a piece covering the sale of the shuttered Klausner Lumber One facility in Live Oak, FL in...
END_OF_DOCUMENT_TOKEN_TO_BE_REPLACED