Is it Time to Invest in Argentina’s Forests?

While 70 percent of South America's forestry investment is concentrated in Brazil, the continent is also home to other locations with great potential that are currently being explored by forestry and industrial investors. In some cases, such as Chile and Uruguay, these markets are already competitive (and consolidated). In other areas, markets are prospective and developing. In these markets, a level of uncertainty affects the country's ability to attract a larger amount of investment; Argentina is one of these countries.

Over the last year, Forest2Market do Brasil has been frequently consulted about investment opportunities in Argentina. While it is oftentimes considered to be the "airplane that never took off" in terms of its forest economy, the country has an area of planted forests that is approximately 1.2 million hectares, with thousands of available hectares for further forestation and new forestry projects.

Despite this potential, the Argentine forestry sector has not developed much over the last 15 years due to legislative restrictions that inhibit the attraction of new investment. This has led to a series of economic crises in the country. However, the 2015 election of a new federal government that understands the importance of sound fiscal policy and new investment has brought fresh hope for expanded economic development in Argentina.

Argentina's most active forest areas are located in the northern region of the country in the provinces of Corrientes and Missiones, each with approximately 500,000 hectares of planted forest. However, a large portion of this acreage—planted around the year 2000—is reaching harvest age at a time in which there is no demand (current or even near term); the volume is simply too large for both domestic consumers and local exporters, who are equipped to handle a ver 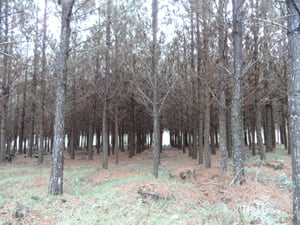 y small capacity at this time.

According to data from the National University of Missiones (UNaM), there is an annual surplus of 3 million cubic meters (m3) in the region of Missiones, which will become a surplus of 5 million m3 in 2019 with further maturation of the forest. In Corrientes, the current surplus volume is already estimated to be 5 million m3 per year.

Finding itself in a similar situation to the Uruguayan pine market, Argentina has a significant surplus of wood, which reduces the attractiveness of the country as new location for forest investment.

Since Argentina has a robust supply of wood to fuel different segments of the forest products industry but lacks domestic demand, production efforts should be directed toward servicing foreign markets. This will allow producers to take advantage of favorable exchange rates while meeting the growing global demand for wood products.

Argentina’s forest industry is actively addressing issues to make the country more competitive globally, such as its high freight prices. However, the primary reason investors are currently shying away from Argentina is the macroeconomic uncertainty that extends from political situation in the country.

While the current government is doing its homework, there is still no long-term confidence from the investment community—much of which is riding on the outcome of the 2019 election. The fiscal deficit is driving most of Argentina’s current economic woes; however, the devaluation of the Argentine currency in recent months coupled with an increase in interest rates (currently, the real interest rate of Argentina - 6.04% - is the highest in the world) indicates that the country’s recession since the beginning of the year will likely worsen in 2H2018.

Given this scenario, the federal government has no alternative but to accelerate the reduction of the fiscal deficit (recently the government announced a significant spending cut of $3.2 billion) and let the exchange rate fluctuate freely, which is good news for exporters that can compete globally.

The Argentine government has adopted new policies aimed at:

In macroeconomic terms, such measures are theoretically the correct course of action to rescue economies in crisis; however, they oftentimes require long-term dedication to produce results. The International Monetary Fund (IMF) likes this new direction and recently approved a loan of $50 billion for Argentina, which is a demonstration of international support for the country's policy of economic openness and long-term confidence. This is also the kind of economic change that will drive interest in Argentina’s forest products industry and improve its investment appeal.

Global Forest Industry
Effects of the COVID-19 Pandemic on Brazil’s Forest Sector
Some players in the Brazilian forest-based industry are doing well in the face of the economic crisis caused by the...
END_OF_DOCUMENT_TOKEN_TO_BE_REPLACED