Though still above the historical average of 1.5 million units, US housing starts dipped more than expected in July as construction materials, supply chain and labor constraints remain challenging. The near-term good news amid continued uncertainty is while residential starts dropped last month, building permits increased due to a pickup in applications for multifamily dwellings. 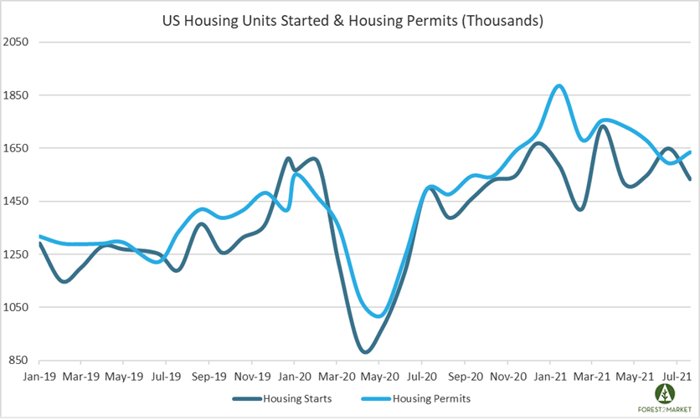 The 30-year fixed mortgage rate dropped in July from 2.98 to 2.87, and the NAHB/Wells Fargo Housing Market Index (HMI) sank 5 points in August to 75 – the lowest level in over a year.

Per fresh housing market insights published in our most recent issue of the Economic Outlook, the most significant development during the last month involves action undertaken by the Biden administration. Despite indicating it had no legal authority to do so because of a June 29 Supreme Court decision, on August 3 the White House nonetheless instructed the Centers for Disease Control and Prevention (CDC) to issue a revised eviction moratorium extending through October 3.

Although they were rationalized on the grounds of protecting renters and homeowners who had been impacted by the pandemic through no fault of their own, prolonged government intervention in the market risks exacerbating the rent-/mortgage-payment problem—and extending those problems to housing providers, half of whom are mom-and-pop operators. This is a dangerous game that could have cascading, lasting consequences.

Despite the ongoing eviction moratorium saga, a combination of homebuilder sentiment receding to an 11-month low, homebuyer sentiment at a record low, and pending home sales declining because of the “huge spike” in prices suggests housing activity could be volatile over the coming months. On the supply side, “builders are contending with shortages of building materials, buildable lots and skilled labor as well as a challenging regulatory environment,” said NAHB’s Robert Dietz. Those challenges are bleeding over into demand by “putting upward pressure on home prices and sidelining many prospective home buyers even as demand remains strong in a low-inventory environment.”

Upward price pressure continues to shock both buyers and sellers as the median price of a US home continues to rise virtually unimpeded. Prices are currently at the highest level in history: $353,000, which represents a 17 percent increase over last year. “While housing demand appears to have peaked, we believe it is being held back by high prices and lack of inventory,” wrote Jefferies’ Aneta Markowska and Thomas Simons. “So, to the extent supply improves, we should see a rebound in demand, although that might not happen until next year.”

How is this trajectory sustainable given the rent/mortgage debacle noted above?

Fox Business’s Jonathan Garber recently wrote that “The euphoria in the U.S. housing market may be flashing a danger signal, and lofty home values could be at risk of a sharp drop.” David Rosenberg, chief economist and strategist at Toronto-based Rosenberg Research added that "The ‘Black Swan’ is the inevitable collapse in U.S. home prices — they are in the stratosphere benchmarked against all the fundamental factors that drive valuations.”

While air will inevitably be bled out of this inflated housing market, an abrupt crash seems unlikely in the current environment. Garber added: “A further rise in inventories is unlikely to completely cool off the housing market as supply remains ‘very, very low,’ said Odeta Kushi, deputy chief economist at First American Financial Corp.”

"It’s like going from an extremely hot market to just a hot market. It’s still a seller’s market," she added.

Lumber Prices
SYP Lumber Prices Stabilize; Is More Volatility Around the Corner?
By late June, the price for finished southern yellow pine (SYP) lumber had tumbled 59% from its 2022 high mark of...
END_OF_DOCUMENT_TOKEN_TO_BE_REPLACED

Housing Market
Housing Starts Tumble to Lowest Level in 17 Months
After a disappointing May and June, US housing starts continued to lose momentum in July as the housing market cools...
END_OF_DOCUMENT_TOKEN_TO_BE_REPLACED

Housing Market
Lower Housing Starts, Higher Home Prices, and Surging Inflation
After a disappointing May (-14%), US home building continued to inch down in June as the housing market cools amid...
END_OF_DOCUMENT_TOKEN_TO_BE_REPLACED