There is certainly no shortage of uncertainty in the world but, amid stabilizing economic news, US housing starts for June provide some indication that things are beginning to settle. 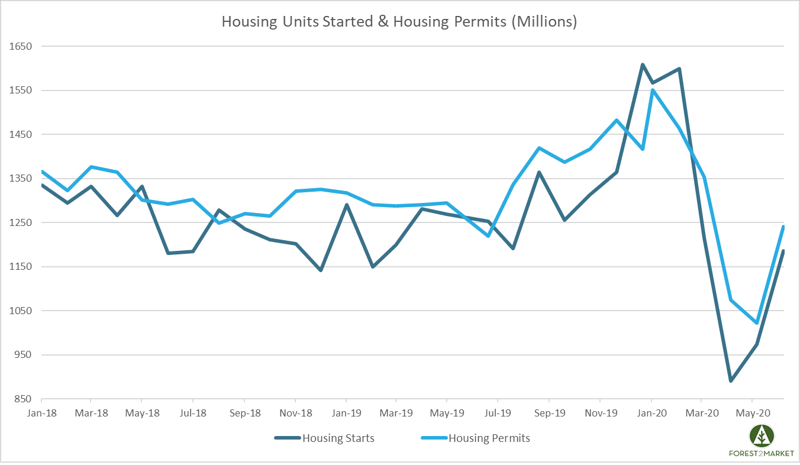 The 30-year fixed mortgage rate dipped in June from 3.23 to 3.16, the lowest level on record. The NAHB/Wells Fargo Housing Market Index (HMI) jumped 14 points to 72 in July, which marks a return to pre-pandemic readings.

Ian Shepherdson, chief economist at Pantheon Macroeconomics, said: "The housing market is the brightest spot in the economy, probably because most of the people who have lost their jobs due to Covid-19 are younger renters; the median age of US homebuyers is about 47.”

As noted above, mortgage rates are at all-time lows and, while we are still a long way from returning to pre-pandemic levels, the employment picture is slowly improving. These two factors continue to positively impact the entire housing market; sales of existing homes in June jumped nearly 21 percent versus May.

The National Association of Realtors chief economist Lawrence Yun said: "The housing market is hot. Homebuyers have swiftly moved into the market to take advantage of the unimaginably low mortgage rates. But inventory is lacking with a sizable backlog of buyers getting outbid by others. More homes therefore need to be built to help relieve the housing shortage. The latest increase in housing starts of 1.186 million (17% gain) is only a bare, partial recovery after a shutdown. The country needs at least 1.5 million units. Building more homes also has an added benefit of boosting the local economic growth. In the meantime, expect multiple offers to be common on many mid-priced homes for the remainder of the year."

The real estate market’s climb out of the doldrums associated with COVID-19 is certain to encounter some obstacles—e.g., home-mortgage delinquencies—which in May surged to their highest level in nine years. Property research firm Black Knight reported total borrowers more than 30 days late jumped to 4.3 million in May, up 723,000 month-over-month. This means at least 8 percent of all US mortgages were either past due or in foreclosure.

Whereas 46 percent of homeowners in forbearance agreements (which allow mortgage payments to be deferred for six months) made payments in April, that proportion dropped to 28 percent in May, and to only 15 percent as of mid-June. Homeowners will be expected to repay the arrears in one lump sum when their forbearance agreement period expires, which means a wave of forced selling could unfold this fall if participants’ finances have not improved. Ultimately, then, forbearance may have only delayed—but not averted—the housing market’s day of reckoning that, according to CoreLogic, could stretch into 2022.

Depending upon one’s source of information, the situation may (or may not) be somewhat worse for renters. A survey by ApartmentList found 32 percent of renters missed making full housing payments in June (versus 29 percent of mortgaged homeowners). Although a majority of payments missed at the beginning of the month are paid by the end of the month, those who do not pay on time in one month are much more likely to miss a payment in the following month.

Since some eviction and foreclosure protections are beginning to expire, 37 percent of renters and 26 percent of homeowners ApartmentList surveyed are at least somewhat concerned they could face eviction or foreclosure in the next six months. They will still need housing if evicted/foreclosed upon, but the damage to their credit will make acquiring shelter much more difficult.

Overall, most analysts are taking a measured view about housing’s prospects in the near term. “The housing market continues to be the strength in the economy,” wrote Joel Naroff. “To some extent, the virus may be helping [especially new home sales] as people who were on the fence about where to live may be turning to less dense locations. It will be a while before we can determine if that is just a temporary move or a trend.

“Also, this is a sector that was ripe for ‘make-up’ sales,” Naroff continued. “That is, demand was not so much lost as deflected from its normal pattern. It is likely to take a few more months before we know the true state of the housing market. Low mortgage rates are great, but income uncertainty is a major negative. So, don’t be surprised [if] August or September numbers are not as great as expected.”

Housing Market
Housing Starts Plunge to Lowest Level in 19 Months
After jumping 12% in August due in part to strong demand from the multi-family construction sector, US housing starts...
END_OF_DOCUMENT_TOKEN_TO_BE_REPLACED

Lumber Prices
Southern Lumber Prices Continue to Inch Down
After jumping 12% in August due in large part to strong demand from the multi-family construction sector, US housing...
END_OF_DOCUMENT_TOKEN_TO_BE_REPLACED

Lumber Prices
SYP Lumber Prices Stabilize; Is More Volatility Around the Corner?
By late June, the price for finished southern yellow pine (SYP) lumber had tumbled 59% from its 2022 high mark of...
END_OF_DOCUMENT_TOKEN_TO_BE_REPLACED