KiOR Fails to Mind the Gap

Over the course of 2014, bad news has been mounting for KiOR. This image from an Industry Intelligence seach for KiOR provides the headlines.

The slide started in 2013, when the company failed to meet its production goals and its stock plummeted. At its highest, just a couple of months following the company’s IPO in the summer of 2011, KiOR stock was worth $23.85 per share; by March of 2014, the same share traded for less than $1. Today, it is worth about 1/8th of that amount. 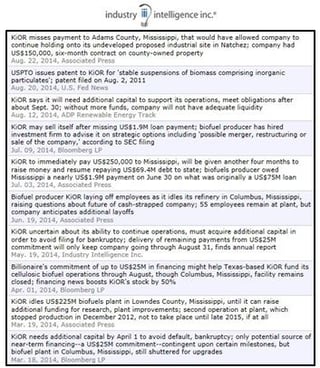 The issue for KiOR has been in bridging the rather treacherous gap between demonstration scale and commercial scale production. Though KiOR was able to make small quantities of cellulosic biocrude in its Columbus, Mississippi plant as early as the end of 2012, by summer of 2013, it was clear that there was trouble in the gap. The company struggled to meet production goals, due to problems with quality and efficiency. The plant’s capacity is 13 million gallons per year. By early 2014, KiOR had shuttered the plant for upgrades, citing bottlenecks and other efficiency and cost issues; today, the plant remains idle, and all upgrades are on hold until funding to correct the problems and continue operations materializes.

The latest news stories seem to suggest that funding is unlikely to materialize and that the end is near for KiOR. The company has missed its most recent payment to Adams County, MS to secure the Natchez, MS site for its larger commercial scale facility. It has yet to attract additional investors (outside of Vinod Khosla) that would keep the company running after September 30, 2014. Over the summer, the company defaulted on its loan from the State of Mississippi when it missed a $1.8 million semi-annual payment. Together, these events indicate that KiOR may be going the way of Range Fuels, another Khosla venture that failed to traverse the gap to commercialization. The following excerpts from the company’s 2Q2014 10Q, which was published August 11, substantiate this view:

“During 2014, we ceased production at our Columbus facility in order to focus on optimization projects and upgrades that were targeted at improving throughput, yield and overall process efficiency and reliability. We have elected to suspend all optimization work and to bring the Columbus facility to an idle state. During this time, unless and until we restart the facility, we expect to have no production and limited revenue from the facility, but will continue to incur significant operating costs and expenses.

If we successfully receive all of the funding available under our Protective Advance Agreement, we expect to be able to fund our operations and meet our obligations until approximately September 30, 2014, but will need to raise additional funds to continue our operations beyond that date. If we are not successful in achieving our performance milestones or if we are otherwise unable to raise additional funds beyond approximately September 30, 2014, we will not have adequate liquidity to fund our operations and meet our obligations (including our debt payment obligations), in which case we will likely be forced to voluntarily seek protection under the US Bankruptcy Code (or an involuntary petition for bankruptcy may be filed against us).”

In fact, the quarterly report to the SEC goes one step further, indicating that KiOR entered into a Protective Advance Loan and Security Agreement with the KFT, a Vinod Khosla trust, in July 2014. According to the 10Q, the purpose of this loan is to:

US forest industry
CPI & Forest Products Sector PPI Continue to Expand
US forest industry performance in February and March was recently reported by both the US government and the Institute...
END_OF_DOCUMENT_TOKEN_TO_BE_REPLACED