Every month, Forest2Market publishes updated forecasting products designed specifically for participants in the forest value chain. The Economic Outlook is a macroeconomic indicator forecast that supplies critical information, context and insight about general economic trends and direction, and the 4Cast supports regional operational decision making for those who buy and sell timber. With an understanding of economic indicators, future stumpage prices and insight into buying and selling windows (periods in which buyers or sellers hold relative market advantage), subscribers are better able to time sales or purchases, negotiate prices, manage workloads and control inventory levels. The following commentary is just a sampling from the most recent Economic Outlook for June, 2019.

The Bureau of Labor Statistics’ (BLS) establishment survey reported non-farm payroll employment rising by 75,000 jobs in May (+180,000 expected; and roughly half the minimum forecast by analysts). Also, combined March and April employment gains were revised down by 75,000.

Meanwhile, the unemployment rate (based upon the BLS’s household survey) remained at 3.6% (Figure 4) as the number of employed persons rose (+113,000) together with the civilian labor force (+176,000); the under-employment rate dropped by 0.2PP, however. 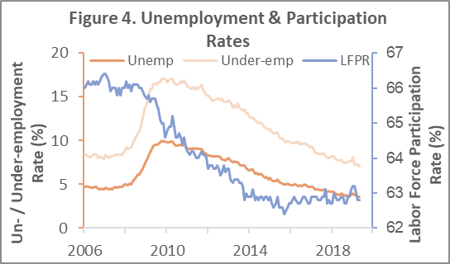 The number of employment-age persons not in the labor force edged down (-8,000) to 96.2 million. This metric began spiraling higher in February—reversing the prior downward trend in place since August 2018—so it is encouraging to see hints this statistic may again be heading in the right direction. With growth in the labor force slightly exceeding that of the civilian population, the labor force participation rate was stable at 62.8%.

For a change, the establishment (+75,000 jobs) and household survey results (+113,000 employed) were at least directionally in sync. The BLS may have “plumped” the headline number by a small amount: Had average (since 2009) May business birth/death model and seasonal adjustments been used, job gains might have amounted to a truly abysmal +39,000. On the other hand, employment taxes withheld in May shrank by $10.5 billion (-4.9% MoM, but +8.8% YoY), to $203.4 billion, so the headline jobs number does not appear unreasonable. 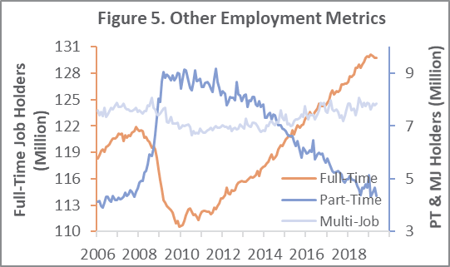 Average hourly earnings of all private employees increased by $0.06, to $27.83 (+3.1% YoY; +3.2% expected). Because the average workweek for all employees on private nonfarm payrolls was unchanged at 34.4 hours, average weekly earnings increased by $2.06, to $957.35 (+2.8% YoY). With the consumer price index running at an annual rate of 2.0% in April, workers’ purchasing power appears to be reasonably stable.

“We had expected a slowdown... but not this much,” said S&P Global Ratings’ Beth Ann Bovino. “While much of the attention from investors has been focused on trade disputes and the potential for a slowing economy, today’s disappointing employment report provides further evidence that the end of the business cycle is upon us and economic activity is slowing,” added Allianz Investment Management’s Charlie Ripley.

Although “disappointing” seems an apt description, the financial markets viewed the headline as a net positive because “this report, combined with nerves around tariffs, will be enough to force a rate cut from the Fed in either June or July,” wrote economist Curt Long. A jump in announced job cuts (+46% MoM; +86% YoY) during May might also sway the Fed.

To borrow a phrase, “one month does not a trend make,” however. “Today’s 75,000 jobs number could mark the beginning of the end of the strong jobs expansion, or it could be an outlier,” said Navy Federal Credit Union’s Robert Frick. “We’ll have to see another couple months of jobs numbers before we can establish hiring is slowing down.” 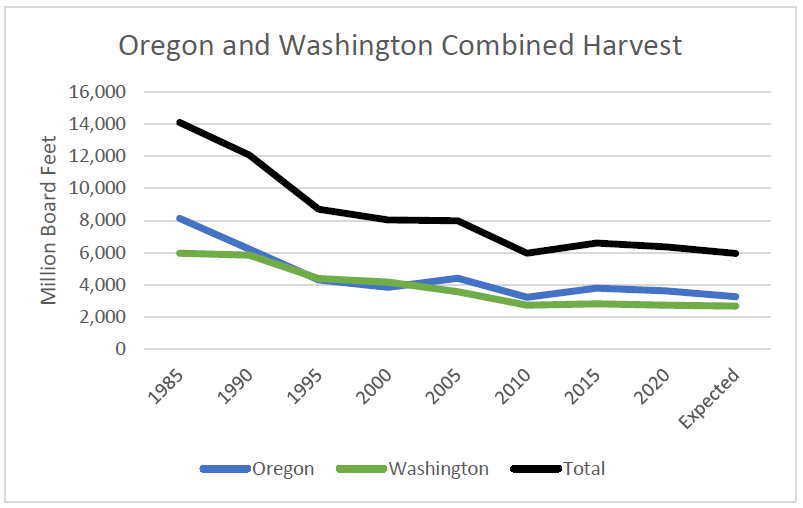 US forest industry
Are You Planning for the Reduction in Northwest Timber Supply?
The timber industry in western Oregon and Washington have been voicing concerns over log supply for decades. This...
END_OF_DOCUMENT_TOKEN_TO_BE_REPLACED