As a result of these two factors, softwood lumber prices have fallen and mills in the Northwest have started announcing closures and curtailments, citing market conditions:

This downtime will be especially hard for mills like Roseburg that are just going into, or coming off, major capital expenditures and acquisitions.

This softness has just begun to hit southern yellow pine markets in the South, however. The latest pricing data shows that, while on a mild downward trajectory since September 2014, the southwide weighted average price for SYP KD lumber fell 6.4 percent in the last week of April alone and then continued to drop in the first week of May. 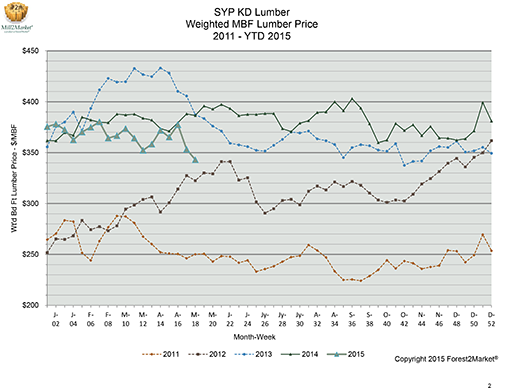 Mills are taking fewer orders and just last week made a significant effort to ship out of inventory, but the reactions seem all too late. Even though prices have been trending downward, mill production has continued to increase at a rate of 0.4 percent per month. And while no curtailments have been announced in the South, Forest2Market analysts believe that the indicators are in motion for the South to follow the Northwestern trend: in essence, the Southern market will continue to feel pressure from Canadian imports, and prices will likely continue to soften. If that happens, curtailments will spread to the Southeast as well.