May Housing Starts Rebound; Have We Hit Bottom?

After plunging two consecutive months (30 percent in April alone) to the lowest level since early 2015, US homebuilding appears to have bottomed and marginally reversed course in May. While the global economy is not yet put COVID-19 in the rearview mirror, there is reason for optimism as applications for home loans surged to an 11-year high in mid-June. 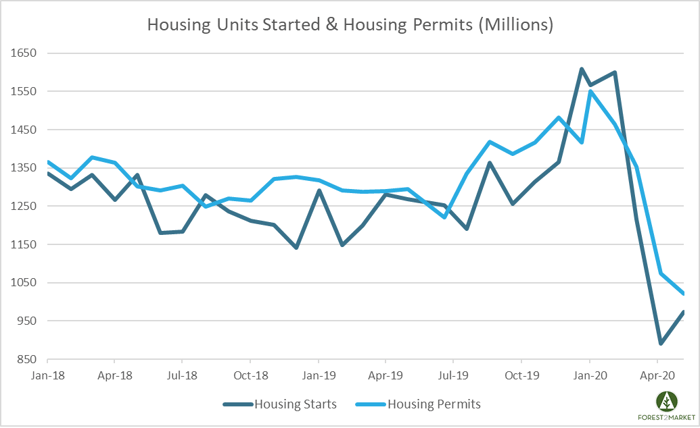 The 30-year fixed mortgage rate dipped in May from 3.31 to 3.23, the lowest level on record. The NAHB/Wells Fargo Housing Market Index (HMI) jumped 21 points to 58 in June, easily besting market expectations of 45.

As we noted last month, new housing demand is tied to employment and unemployment is now at all-time highs.

“Housing is a leading economic indicator and it is pointing the way forward but there is a limit to growth when the economy has to drag along the millions and millions of unemployed workers displaced in this pandemic recession who won’t be seeing paychecks anytime soon,” said Chris Rupkey, chief economist at MUFG in New York.

Despite the slight gains in recent jobs numbers, the current unemployment rate is still a staggering 13.3 percent. A significant proportion of workers who became unemployed during the shutdown were lower-paid employees; white-collar workers were more likely to be spared because of a greater ability to work remotely and/or their more specialized skills. That could change, however, unless employers are able to justify quickly bringing back the laid-off workers; if that does not happen, a round of catch-up layoffs could occur including managers and in sectors adjacent to the epicenter of the Covid-19 blast.

Addressing those figures, Zillow’s Matthew Speakman commented, “April’s report is the first one to truly capture the change in buyer activity since the coronavirus broke out on U.S. soil. The combination of fear, economic uncertainty and mandatory stay-at-home orders brought huge portions of the economy to a crashing halt and prevented many home shoppers and sellers from participating in the market.”

Speakman continued, “… it’s clear that as the country begins to slowly reopen, buyer demand for homes remains sturdy and many are eager to take advantage of record low interest rates to get in on the action. It appears the worst may now be behind us and that home sales are at least at the start of the road to recovery.”

Realtors’ beloved catchphrase (location, location, location) may prove even more fitting as the pandemic’s aftermath plays out. While large urban centers and sprawling metropolitan areas were the destination of choice in previous housing upturns, the widening adoption of remote work policies (as well as recent civil unrest in large metro areas) could spawn a reshuffling that boosts sales volumes above pre-pandemic levels in suburbs and smaller, less-expensive cities.

Remote workers may not “cut the cord entirely from their cities, but that they may opt for an ‘extension cord’ into the suburbs where they can get more space, more outdoor areas and, of course, a home office,” said Zillow’s Svenja Gudell.

Mortgage application activity increased by 9.3 percent for the week ending June 5, suggesting demand for both for new and existing homes may have already bottomed and is setting the stage for subsequent recovery across the broader economy. Nevertheless, mortgage credit availability could prove to be a near-term headwind as the housing market attempts to rebound.

Over the past month, lenders have effectively shut down a large swath of the mortgage market by instituting higher credit-score and down-payment requirements, and in some cases stopping issuance of certain types of loans altogether. The Mortgage Bankers Association estimates that mortgage credit availability has plunged by more than 25 percent since the US outbreak of the virus—even as applications trend higher.

The triggers, industry executives say, include lenders becoming risk-averse during the coronavirus crisis, knock-on effects of Congress allowing millions of borrowers (projected to peak at 15 percent of homeowners) to delay their monthly payments, and the decision by mortgage giants Fannie Mae and Freddie Mac to purchase mortgages where the borrower had already entered forbearance; at the end of May 8.53 percent of mortgage loan portfolio volume was in forbearance, up from 0.25 percent in early March 2020.

Though May’s housing starts appear lackluster on the surface, we did see an end to the two-month freefall. Some progress is still progress, even though we have a long way to go.

Housing Market
October Housing Starts Down; Will Legislative Proposals Burst the Bubble?
For the second month in a row, total US housing starts decreased in October as the single-family sector continued to...
END_OF_DOCUMENT_TOKEN_TO_BE_REPLACED 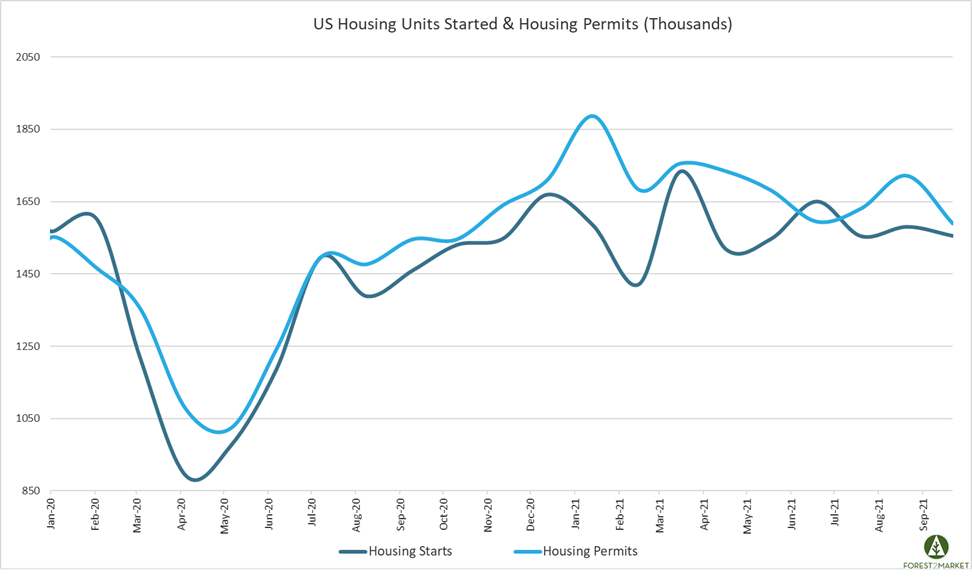 Housing Market
September Housing Starts Down as Market Continues to Cool
Total US housing starts inched down in September as the multi-family segment faltered and the single-family sector...
END_OF_DOCUMENT_TOKEN_TO_BE_REPLACED 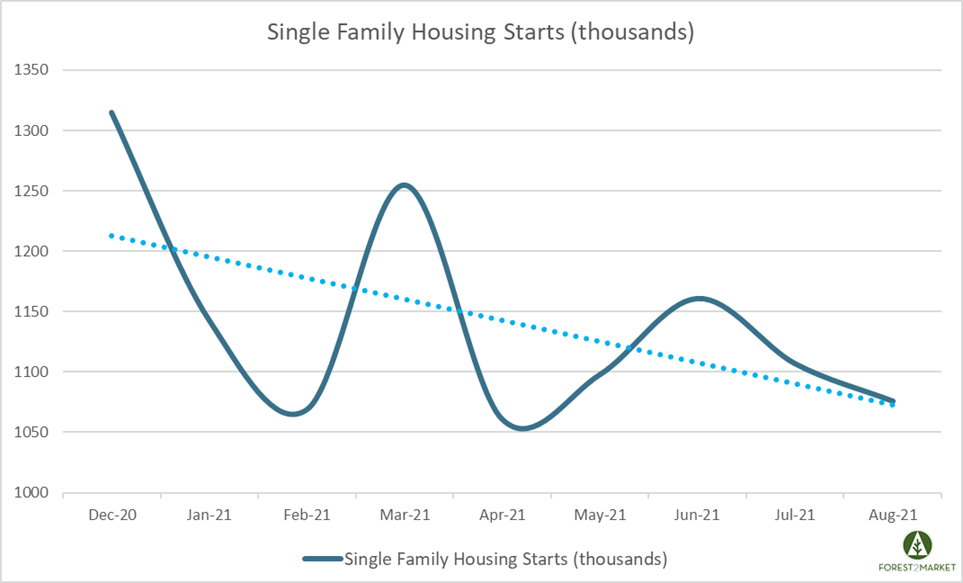 Housing Market
August Housing Starts Inch Up, But Single-Family Building Continues to Slow
Total US housing starts inched up in August, though the pace of single-family building contracted for the second...
END_OF_DOCUMENT_TOKEN_TO_BE_REPLACED