US forest industry
Author: Pete Coutu
The paper industry has a long and storied history in the Northeastern United States but is being challenged by two of the largest paper making costs, fiber and energy. According to Forest2Market’s Delivered Price Benchmark, the Northeast Mills average hardwood total fiber cost was over $10.00 higher than the average hardwood total fiber cost in the Lake States and over $14.00 higher than the average in the South. 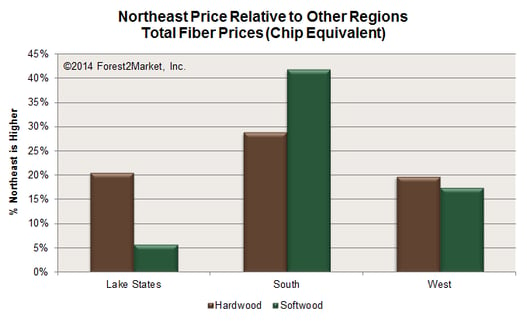 Rising energy costs – a result of cold winter temperatures and a lack of pipeline capacity from northern New York to New England – have also hurt the paper industry. According to the Portland Press Herald, officials are collaborating on ways they can add natural gas pipeline capacity to the region, though improvements are unlikely to be felt prior to 2016.

On January 23, Great Northern Paper announced it would stop production for 16-weeks. Spokesperson Scott Tranchemontagne noted, “We must operate both paper machines in East Millinocket to be viable, but the high cost of converting to, and heating our mill, with natural gas has made this option impossible at this time.”

Meanwhile, Verso Paper is nearing the end of a two-week shutdown of its Bucksport mill. Company spokesman Bill Cohen cited the “extraordinary cost of natural gas” and reduced order volume, both of which are typical for the beginning of the year, as the deciding factors behind the temporary shutdown. Lincoln Pulp and Tissue has also laid off staff and reduced its operating capacity since a recovery boiler explosion in early November 2013.

Rising fiber and energy costs, the structural decline in the white paper segment of the industry, and falling paper prices certainly do present their challenges.  However, the paper industry in the Northeast has responded to numerous challenges over the past century.  I am confident the industry will learn how to adapt in the early part of this century as well.

US forest industry
Strategic Planning During Downturns with Precise Market Data
It’s difficult to overstate the uniqueness of the current global health (and economic) crisis we find ourselves in....
END_OF_DOCUMENT_TOKEN_TO_BE_REPLACED