October Housing Starts Down; Will Legislative Proposals Burst the Bubble?

For the second month in a row, total US housing starts decreased in October as the single-family sector continued to struggle with availability, affordability, labor and building materials challenges. Christopher Rupkey, Chief Economist at FWDBONDS wrote, “There are zoning problems, higher land costs, a lack of labor, and inflation has inflated the cost of raw building materials." 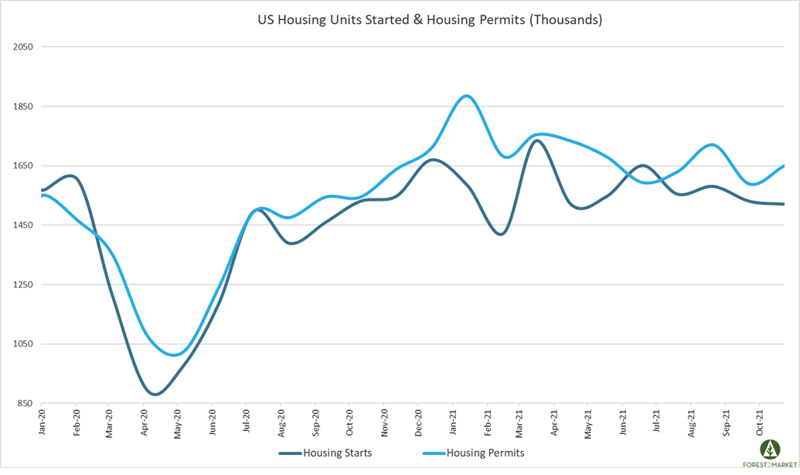 The 30-year fixed mortgage rate jumped in October from 2.90 to 3.07, and the NAHB/Wells Fargo Housing Market Index (HMI) increased three points in mid-November to 83. 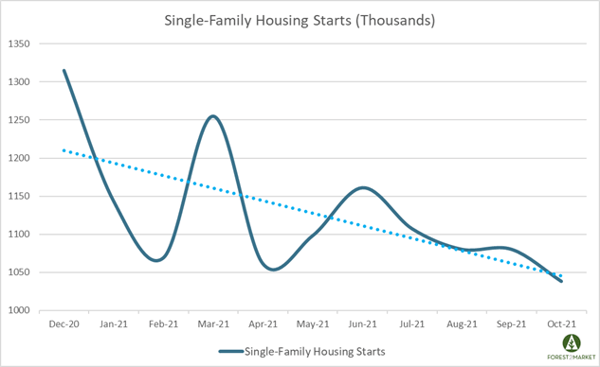 Even though new construction is trending lower, builders are proceeding with caution as new homebuilding remains supported by a significant shortage of previously-owned homes on the market. Per fresh housing market insights published in our most recent issue of the Economic Outlook, as an indication of how shortages of building materials and labor are making it tough for builders to finish projects, the number of completions in October was unchanged MoM, which is stuck at the lowest seasonally-adjusted level in over a year.

However, home sales remain strong despite higher prices. “Noticeably, the cost of lumber bounced off the August bottom of around $400, moving into the mid-$600s per thousand board feet,” said Realtor.com’s George Ratiu. “The increase ensured that homebuilders kept higher prices, pushing the median new home sale price up… from a year ago [+18.7% to a new record of $408,800].”

But rising mortgage rates could become a headwind for the market in the coming months if some home buyers are priced out at the margin. The National Association of Realtors’ Lawrence Yun attempted to paint the outcome in brighter hues by saying, “Rents have been mounting solidly of late, with falling rental vacancy rates. This could lead to more renters seeking homeownership in order to avoid the rising inflation.”

Legislative Headwinds on the Horizon?

Longer term, a provision in the budget-reconciliation bill presently being considered by Congress has the potential to dramatically curtail real estate investment. “Real estate is a long-term, risky and labor-intensive investment compared with stocks and bonds,” wrote analysts Dan Palmer and David Williams.“Without tax incentives, real estate can’t compete with other investments for essential capital” since the proverbial investment “playing field” is not level.

In short, under the House bill, taxation of real-estate operating profit (i.e., ordinary income) would soar above current rates, and real estate capital gains would also spike above current levels. Concurrently, new limitations would be phased in to reduce mortgage-interest deductions and depreciation.

Moreover, the Biden administration proposes to tax generational property transfers when the owner dies at either the higher ordinary-income or capital-gains rates—and to layer on an additional proposed death tax; and that is before state taxes. The huge aggregate tax bill on death will force estates to sell properties to cover what they owe. As similar policy changes in 1986 and 2008 showed, forced selling in real-property markets creates havoc in financial markets.

For the time being, setting aside the uncertainty over whether the above-mentioned policy proposals might be implemented, the housing market has plenty of near-term challenges to sort out. "Supply-chain bottlenecks will likely limit construction activity in the short term, but the supply picture should look better in 2022," said Abbey Omodunbi, a Senior Economist at PNC Financial. "Declining affordability and rising mortgage rates will soften demand in the next year."

Housing Market
Housing Starts Plunge to Lowest Level in 19 Months
After jumping 12% in August due in part to strong demand from the multi-family construction sector, US housing starts...
END_OF_DOCUMENT_TOKEN_TO_BE_REPLACED

Lumber Prices
Southern Lumber Prices Continue to Inch Down
After jumping 12% in August due in large part to strong demand from the multi-family construction sector, US housing...
END_OF_DOCUMENT_TOKEN_TO_BE_REPLACED

Lumber Prices
SYP Lumber Prices Stabilize; Is More Volatility Around the Corner?
By late June, the price for finished southern yellow pine (SYP) lumber had tumbled 59% from its 2022 high mark of...
END_OF_DOCUMENT_TOKEN_TO_BE_REPLACED