Winter snowpack in the PNW was below normal in 2019, which has prompted Washington Governor Jay Inslee to declare drought conditions for nearly half of Washington’s watersheds. “Our statewide snowpack is the fourth-lowest it’s been over the past 30 years,” said Jeff Marti, the drought coordinator for the Washington Department of Ecology.

When analyzing historical PNW rainfall data using the precipitation tool in SilvaStat360, there is much more volatility west of the Cascades (coastal region) than in the inland region. Average monthly rainfall totals over the last 10 years have varied by nearly 3” in the coastal region, while the inland has demonstrated very little volatility. 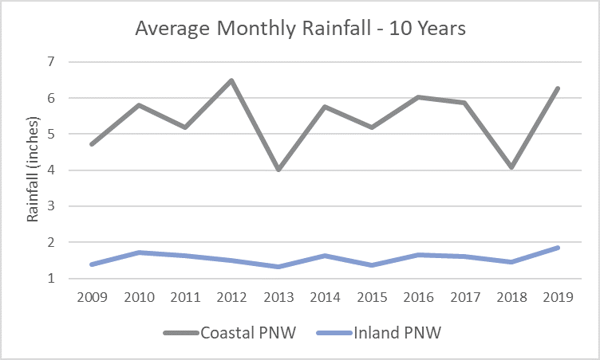 After a dry March, April was much wetter and rainfall totals were above average for most of the geographic area. As a result, while totals appear to be skyrocketing in early 2019 in the chart above, only four months of data is available for what is traditionally a very wet period in the region. While the area did receive steady precipitation in 1Q2019, coastal rainfall levels for the first four months of 2019 totaled just 21”, which is far below recent totals for the same period: 2018 – 28”; 2017 – 36”; 2016 – 31.” That “peak” in the chart for 2019 will likely descend pretty rapidly as we get further into the  year.

Per the most recent National Significant Wildland Fire Potential Outlook published by the National Interagency Fire Center in early May, fire activity was minimal in April. “However, if drying continues due to warmth in May, western Washington appears to be at risk for possible burn escapes during dry, windy conditions. Large fire risk is expected to become higher than average and spread to Oregon and central Washington as the summer progresses.”

Currently, naturally-ignited wildfire risks are low across the region.  However, human-caused fire activity in populated areas may increase if dry, windy conditions persist through June. Outlooks through spring and into summer continue to indicate warmer than average conditions for the region. Precipitation will most likely remain below average west of the Cascades but is more likely to be above average east of the Cascades during late spring and summer months.

“Long-range outlooks suggest fire danger will rise to be above average in during the summer, particularly west of the Cascades where outlooks suggest a warmer than average summer. Fire season will likely begin sooner than average in June for areas west of the Cascades and then spread southward in July and August. Areas across northern Washington also appear at risk for more large fires than usual due to persistent dryness.”

In addition to the obvious concerns about public safety and property loss, wildfire danger also threatens the wood supply chain. Harvesting equipment and personnel can be diverted to assist in fire suppression, and state agencies can impose restrictions or complete closures of harvest activity. During wildfire season, the possibility also exists that fire may impact the regional transportation infrastructure—both roadway and rail. In recent years, some mills were unable to move product to market due to temporary short-line rail closures resulting in some market shift, curtailment and inventory management issues. Short-line rail systems can be susceptible to infrastructure damage and service interruptions in both the near- and long-terms if they are in fire zones where the loss of vegetation will leave open soils susceptible to erosion.

US forest industry
US Manufacturing, Forest Industry Slam on Brakes in April
US forest industry performance in March and April was recently reported by both the US government and the Institute...
END_OF_DOCUMENT_TOKEN_TO_BE_REPLACED