According to the Northwest Interagency Coordination Center (NWCC), 2021 is shaping up to be a devastating year for wildfires in the western US. Year-to-date, 43 wildfires have burned more than 558,000 acres of land across Oregon and Washington compared to 24 fires on 13,000 acres at the same point last year. In northern California, the Beckwourth Complex Fire—the largest fire thus far in 2021—is roughly 70% contained after raging across more than 105,000 acres of territory.

While the Pacific Northwest (PNW) is expected to get some much-needed rainfall in the coming weeks, the region is still dangerously dry by historical standards. Forecasts suggest that near-term regional temperatures will be below normal and will include light amounts of precipitation, which is welcomed news during a year when winter snowpack was average and spring rainfall was scarce. 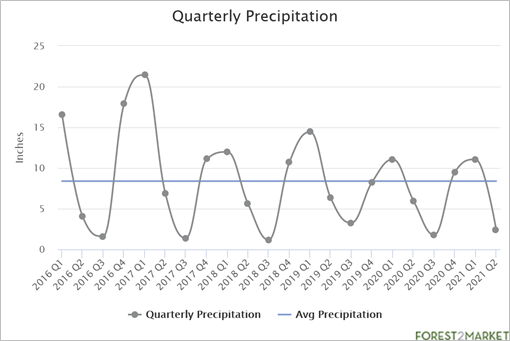 A closer examination of the data via the precipitation tool in SilvaStat360 illustrates a potentially catastrophic predicament for the region. Historically, 3Q is the driest quarter for the western US—as noted in the chart above. However, the region is now heading into 3Q after experiencing the driest 2Q in more than 20 years; precipitation for 2Q2021 was 59% below the 20-year average. 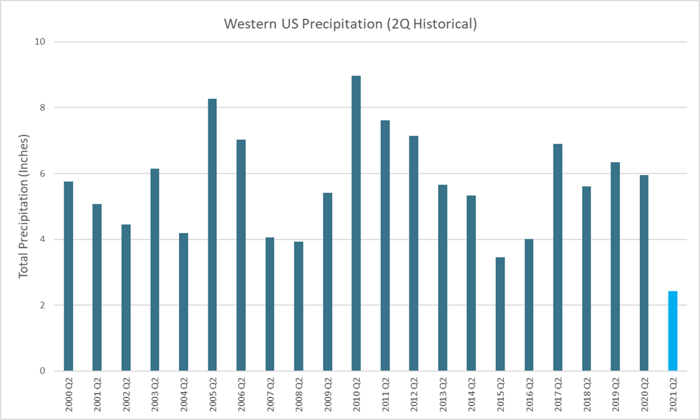 Per the most up-to-date Predictive Services data from the National Interagency Fire Center (NIFC), July marks the annual entry point into the heart of the fire season in western North America. “Drought expanded and intensified over the West with more than 90% of the West now in drought. More than half of the West is in the highest two categories of drought. Numerous all-time record high temperatures were set in the Pacific Northwest, northern Great Basin, and Northern Rockies at the end of June as part of a historical heat wave.”

The most recent National Significant Wildland Fire Potential Outlook published by the NIFC on July 1 notes that surface temperatures have been above normal throughout the West. As a result of high temps in combination with historically low precipitation levels, “Almost all the Northwest geographic area is expected to experience significant fire potential that is above average into September before returning to normal by October.

“Several significant fires were observed in June in central Oregon and northeastern Oregon. Most days are seeing 15 to 20 fires a day with spikes over 40 during lightning events. Over 10,000 acres burned in June, with most of the acres coming from grass fires in Washington. Fire behavior is accelerating and anticipated to transition quickly in the days ahead due to the intense temperatures stressing and curing vegetation. Heavy dead fuel moisture was well below average for most PSAs early in June, with some record low values reached.” 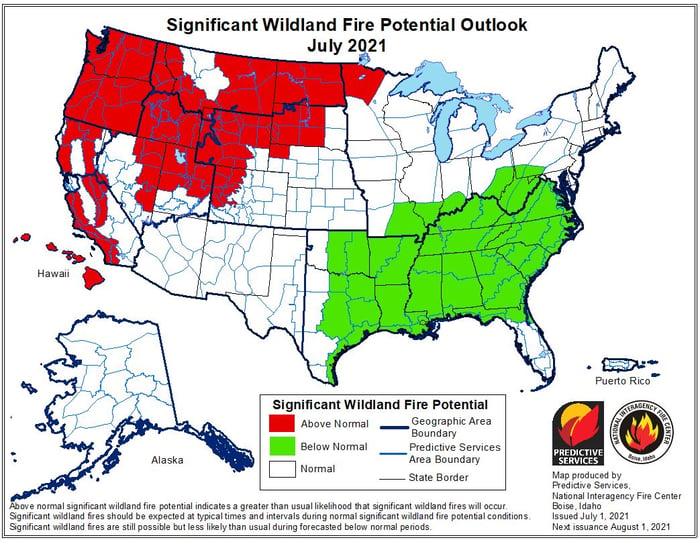 The latest issue also adds, “Climate Prediction Center outlooks indicate that weather conditions are most likely to be hotter and drier than usual for July through September 2021 over the northwest geographic area. The potential for significant fires is expected to be above average through September for the entire northwest geographic area except northwest Washington, which should return to normal in August, and northeast Washington and southeast Oregon, which are expected to return to normal in September. After September, significant fire potential is expected to drop to average and remain there through autumn 2021.”