The South Carolina forest industry is poised for growth over the next decade. By 2020, annual harvest volumes are expected to increase by four to eight million tons, or 20 to 40 percent over the current 20 million tons. This is just one of the positive numbers to come out of a study conducted by the 20/15 Project’s Forest Resource Committee that I had the opportunity to chair.

The role of the Forest Resource Committee was to provide an overview of the future of South Carolina forests for other committees to utilize when developing marketing and outreach strategies for the state. We designed a study to project future wood supply across low, medium and high-demand scenarios and identify opportunities based on the results. Scenarios were based on announced changes in production or capacity (short-run) and expected demand trends (long-run).

Hardwood inventories were kept stable throughout the course of the study. Total additional roundwood demand for the three scenarios ranged from 3.4 to 7.6 million green tons for the low- and high-demand scenarios by 2020. Study results included:

Total pine inventories are projected to rise and remain above the 2009 start point in both the low- and medium-demand scenarios. In the high demand scenario, total pine inventory is expected to decline between 2019 and 2029 as demand for large roundwood increases and the pulpwood age class gap matures into sawtimber. Despite this trend, the inventory of large roundwood will remain significantly higher than 2009 inventory. 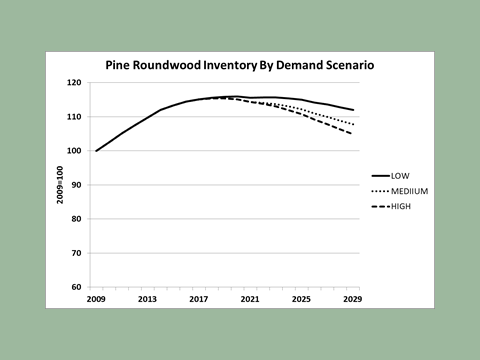 North Carolina State University professor Dr. Bob Abt authored the study and will present its results at the SCFA annual meeting in Asheville, North Carolina later this week.

Based on your comments, I’m curious what the projected growth/drain for the respective products will be over the next 15 years?

The study considered existing standing inventory rather than a growth/drain forecast. Inventories are expected to increase or remain flat across the state for all demand scenarios. In all likelihood, the future growth/drain cycle will emulate the historical cycle.

US forest industry
US Labor Market Wraps Up 2019 With a Bang
Every month, Forest2Market publishes updated forecasting products designed specifically for participants in the...
END_OF_DOCUMENT_TOKEN_TO_BE_REPLACED