The Belgium-based Hydrogen Council, which advocates for increased hydrogen use, recently reported that global investment in hydrogen projects will total $500 billion through 2030. Why the resurgent interest in this technology, and what is driving demand?

As I noted in my previous post on this topic, climate/carbon emissions, circular economics, Environmental, Social, and Corporate Governance (ESG) policies, waste reductions, etc. are now part of a “social license to operate” that is being driven by the market, not legislation. The pressure behind corporate responsibility is now being applied via the finance sector, which has always had the ability to influence behavior at the corporate level.

“Nearly everything has doubled already this year in the world of clean hydrogen, and we expect the momentum to continue in the months ahead,” said Martin Tengler, lead hydrogen analyst at BloombergNEF. “More than 40 countries have now published a hydrogen strategy or are developing one. More than 90 projects are being planned worldwide to use bio based or renewable hydrogen in industry.”

Surging demand for clean vehicles and the rising use of liquid hydrogen in manufacturing – which is widely used in the production of petrochemicals, LEDs, displays, solar panels and semiconductors – will be big drivers of market growth during this decade. But innovations in hydrogen technology are poised to span multiple segments that will help fuel a greener economy. Tengler added that “Electricity generators have almost doubled their planned hydrogen-fired turbine capacity since January.”

Roughly 70 million metric tons of hydrogen are currently produced globally. That number is poised to skyrocket, as big players in global energy are making first moves in the hydrogen space:

Despite these promising developments, technological challenges remain to make hydrogen competitive with rival energy sources. Green hydrogen that is made from renewable energy “costs between $2.50 and $4.50 a kilogram and that price is unlikely to fall to the $1 a kilogram it takes to make the gas using fossil fuels before 2030, according to BloombergNEF.”

Cost reductions schemes are in development, and Wood Mackenzie adds “…we expect capex to fall by one-third by 2030, especially as the manufacturing process for electrolysers moves to automation, unit feedstock costs reduce by 5% and electrolyser efficiency improves by 8%.”

However, the largest driver will be via policy and corporate behaviors influenced by social desire for more sustainable energies, which “means investment in R&D, improvements in technology, pilot projects with industrial users and adapting to changing power markets as renewables penetration increases. Carbon pricing will be key – we estimate a carbon price of US$40/tonne in 2030 could get green hydrogen on a level with SMR-produced hydrogen paired with CCS.” 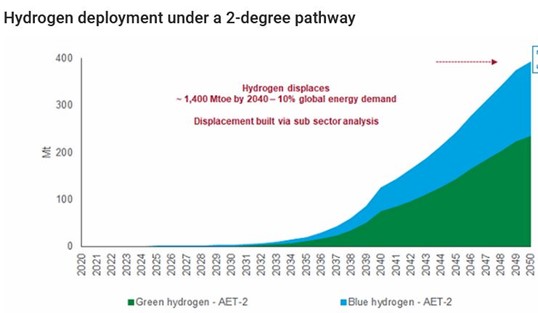 Based on existing distribution systems, infrastructures, supply chain proficiencies and access to capital, the most successful developers of hydrogen are currently 1) large oil refiners that understand hydrogen and its uses who can work in tandem with 2), a second tier of entrepreneurial developers who understand the urgency of new fuels. Right now, these oil companies are best positioned to be the “market makers” based on their fully integrated supply chains, as evidenced by Shell’s commitment that is noted above.

As the segment continues to expand, global wood resources will have an important role to play as a renewable feedstock in the production of green and blue hydrogen – especially for oil/gas players – for two primary reasons:

There are five principles that define sustainable biomass, how it supports forest growth in the US Southeast, and how it can contribute to green and blue hydrogen production:

Hydrogen energy production is going to continue to increase because climate change pressures are driving it. The broader deployment will be directed, at a minimum, by social license to operate and (hopefully) by sound policy as an enhancement; enabling a complementary range of existing renewable resources that includes sustainable biomass will help us reach climate goals faster. And to help get us there, thousands of timberland owners throughout the US South stand ready to supply their renewable timber resources.