On November 30, 2018, EPA published the final rule for Renewable Fuel Standards (RFS) for 2019. These requirements, outlined in the table below, have been increased for cellulosic biofuel, advanced biofuel and renewable fuel.

These standards are but a fraction of the statutory requirements set by Congress in the Energy Independence and Security Act (EISA) of 2007. Based on these statutory standards, Congress expected that 8.5 billion gallons of cellulosic ethanol would be produced in 2019, an amount that accounts for roughly 65 percent of the total advanced biofuel volume requirement for the year. 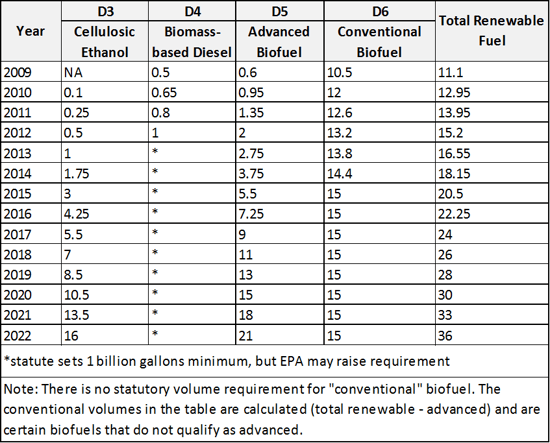 At the same time that it set these standards, however, EISA also recognized that advanced biofuels were a developing technology. To account for its uncertain nature, Congress gave the EPA Administrator the authority to modify the standards under the following provisions:

The Cellulosic Waiver provision in EISA requires that the Administrator set the cellulosic biofuel standard each November for the next year based on "the lesser of the volume specified in the Act or the projected volume of cellulosic biofuel production based on EIA [US Energy Information Administration] estimates for that year. In the event that the projected volume is less than the amount required in the Act, EAP may also reduce the applicable volume of the total renewable fuel and advanced biofuels requirement by the same or a lesser amount."

For the 2019 rulemaking, EPA exercised the Cellulosic Waiver provision and reduced the volume of cellulosic ethanol that obligated parties will need to blend into fuels; it also chose to reduce the advanced biofuels and total renewable fuels totals by the same amount.

Because of the waiver authority granted to EPA, the RFS program has not been meeting its targets. The following table shows the year-over-year (YoY) percentage increase in the amount of renewable fuel in the US fuel supply that the 2007 Congress expected (columns 2 and 3) compared to the actual requirements set by the EPA Administrator for those years (columns 4 and 5). 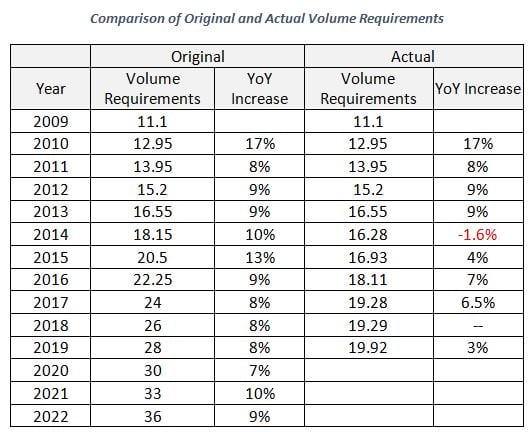 In 2014, the program began falling behind statutory targets and has yet to recover lost ground. The total number of renewable gallons set out in the 2019 annual volume standards is just 71 percent of the 28 billion gallons that the statute requires.

For the biofuels industry, the reduction in volume requirements from their statutory levels means a reduction in demand, and a reduction in demand is not a compelling argument for the growth of the industry. So, while the 2019 final requirements are higher than they were in 2018 and even in the proposed 2018 rule, it seems unlikely that the 2022 target of 36 billion gallons of renewable fuel will find its way into the market.