As the end of the year approaches, it’s an opportune time to analyze delivered roundwood prices and quantities supplied[1] across the US. The following information compares year-to-date (YTD) 2015 pulpwood price averages to the same period in 2014 in Forest2Market’s four primary operating regions. A comparison for conifer sawtimber between the US South and Pacific Northwest (West-Side) is also provided.

[1] For pulpwood, quantity supplied is measured by green short tons delivered to consuming mills within each region and indexed as 100 for YTD 2014. For sawtimber, units are thousand board feet indexed to 1,000 for chart scale in comparison to price levels.

Delivered prices and the supply of conifer pulpwood increased in all regions with the exception of the Northeast/East Canada region, where mill closures in Maine have resulted in decreased prices and supply (Figure 1). The South maintained its low price position compared to the other regions and, while the South and Pacific Northwest (PNW) were in close proximity to each other in 2014 ($32.97 vs. $36.97), prices in the PNW increased $4.50 per ton (12.2%) compared to the South’s increase of only $0.51 per ton (1.5%).

Interestingly, PNW pulpwood prices increased despite a 2.3% drop in delivered supply, and this phenomenon is best explained by the conifer sawtimber activity in the region (see below). As demand for sawtimber waned, harvests declined reducing the amount of topwood and pulpwood delivered to the market. Sawing production also declined in the region, which led to a reduction in residual chip supplies. This led pulp and paper mills to increase their demand for whole-tree chips, which in turn led to increases in pulpwood prices. In the Lake States—a region where conifer is not the predominant species harvested—conifer prices and supply increased in association with hardwood pulpwood increases. Delivered prices increased $7.28 per ton (15.7%) with an increase of 1.6% in supply. 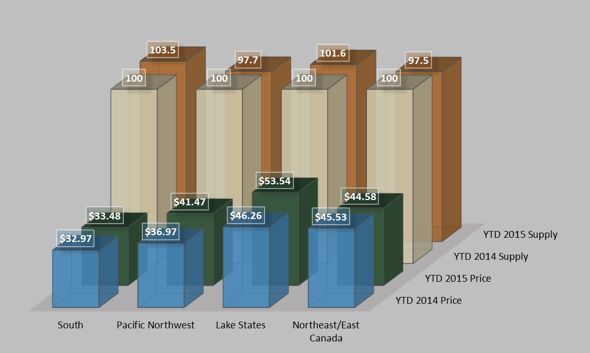 With the exception of the PNW, hardwood pulpwood prices and supplies increased in all regions with the Lake States exhibiting the most significant growth (Figure 2). Delivered prices in the Lake States increased $7.85 per ton (16.8%) compared to 2014, and delivered supply increased 19.9%. While prices currently appear to be coming down in the Lake States, the YTD 2015 average has not declined as fast as the run-up in prices during 2014, which was a consequence of severely depleted mill inventories during that time period.[2] While supply has increased and inventories have recovered close to their norms, the YTD delivered price remains elevated compared to the same period last year.

In the other regions, price increases were generally smaller, ranging from $0.11 to $0.41 per ton. Supply was up in both the South and Northeast/East Canada (4.1% and 9.8%, respectively). In the PNW, the hardwood pulpwood trend mirrored the conifer trend: delivered price increased (1.4%) as available supply decreased (8.1%). 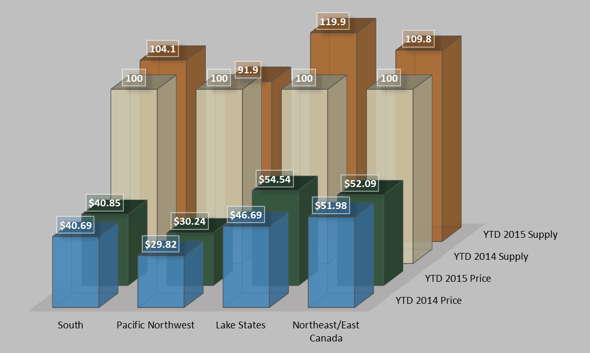 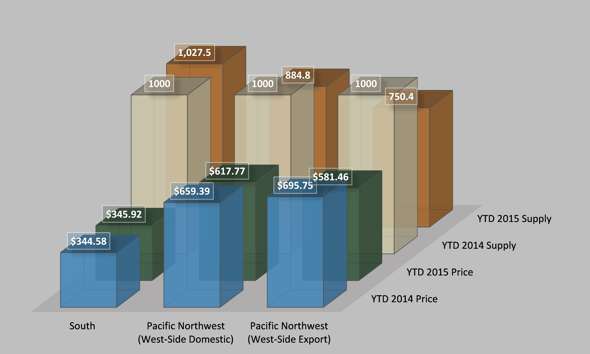 [1] For pulpwood, quantity supplied is measured by green short tons delivered to consuming mills within each region and indexed as 100 for YTD 2014. For sawtimber, units are thousand board feet indexed to 1,000 for chart scale in comparison to price levels.