Lumber Market
Author: Suz-Anne Kinney
The Softwood Lumber Board, which was created in 2011 to manage funds, research, educational events and marketing programs under the Softwood Lumber Check-off Program, has released its 2013 Annual Report. The report itemizes both revenue generated by the check-off and outlines the accomplishments of implemented programs during the year. 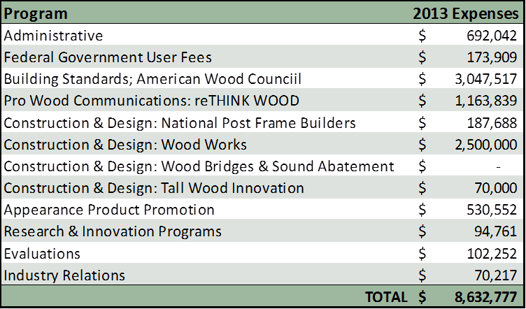 The American Wood Council (AWC) focused on securing a stronger position for wood in both building standards development and green building design. It proposed more than 2,300 changes to five International Code Council 2015 standards and was successful in improving standards for the use of cross laminated timbers (CLT), updating span tables, strengthening deck construction guidelines and simplifying a table to facilitate easier use of tall stud walls by designers. In the green building arena, the AWC’s work led to the increased recognition of, and incentives for using, wood in the US Green Building Council’s LEED standards and the green building standards used by government agencies.

WoodWorks focused on non-residential and multifamily construction in 2013, encouraging designers and builders to choose wood over other construction materials. The organization influenced or converted 275 projects, valued at $2 billion, to wood; these projects used an estimated 250 million board feet of softwood lumber. Wood works concentrates on one-on-one project assistance to help resolve technical issues and provides educational opportunities and other resources to help designers use wood easily and at a lower cost.

ReTHINK WOOD promotes the use of softwood lumber products to architects, engineers and designers in the multifamily and light commercial construction industries via media. The organization placed 57 stories on tall building construction in publications like The Economist and the New York Times and placed advertisements in Engineering News Record, Architectural Record, GreenSource and Multi-Family Executive, generating 127.5 million online impressions and 6.3 million print impressions and achieving a 40 percent share of voice compared to the 30 percent shares captured by both steel and concrete.

National Frame Building Association’s Post-Frame Market Initiative’s goal in 2013 was to “increase awareness and shift perceptions” of post-frame in the light-commercial market. According to surveys conducted by the group, 660 leads designed more than 5,000 post-frame buildings in 2013, using more than 65 million board feet of lumber. These leads plan to design 27 percent more post-frame structures in 2014, using more than 85 million board feet. Overall, the survey found that over the last four years, post-frame gained 45 percent market share, while brick/block construction lost 18 percent and steel lost 8 percent. These results were accomplished through PFMI’s marketing, educational and research efforts.

The Appearance Product Promotion Program was launched midway through 2013 with the intent of protecting and growing residential market share by influencing consumer decisions. Working with the advertising, marketing and public relations agency, Olgilvy & Mather, messaging is being developed to be used by both companies and industry associations. (www.woodnaturally.com)

Market Segmentation Research is being conducted to determine “the susceptibility of softwood lumber demand to economic factors beyond the industry’s control,” as well as opportunities for growth. Research results will inform further industry initiatives undertaken by the SLB.

A framework for Monitoring & Evaluation will be developed by Prime Consulting Group to gauge the effectiveness of SLB programs in order to make sure they meet USDA oversight requirements for measurement. This framework includes metrics to evaluate:

In 2014, the SLB anticipates it will have total funds available of $19.4 million and plans to make $17.8 million of that available for its program budget, $5.57 million of these dollars are not yet committed.

Lumber Prices
Are Skyrocketing Lumber Prices a Sign of Things to Come?
If we’ve learned one thing about economic uncertainty during the COVID-19 pandemic, it’s that markets will always...
END_OF_DOCUMENT_TOKEN_TO_BE_REPLACED

Lumber Prices
North American Lumber Market: Adjusting to Uncertainty
As I wrote just a month ago—in the initial days of the coronavirus pandemic once it gripped the US— “Even if the...
END_OF_DOCUMENT_TOKEN_TO_BE_REPLACED