After jumping 12% in August due in large part to strong demand from the multi-family construction sector, US housing starts dipped by 8% in September. Single-family building continues a precipitous month-over-month (MoM) drop; starts for this segment are down 27% over the last 10 months to their lowest level since June 2020, as the homebuilding sector reflects the challenges of the larger housing market.

After eight weeks of incremental price decreases, the North American lumber market continues to struggle against inflationary pressures and high interest rates that are taking a toll on the housing market. Forest2Market’s SYP lumber price composite for the week ending October 14 was $477/MBF, a 20% decrease from just eight weeks prior. 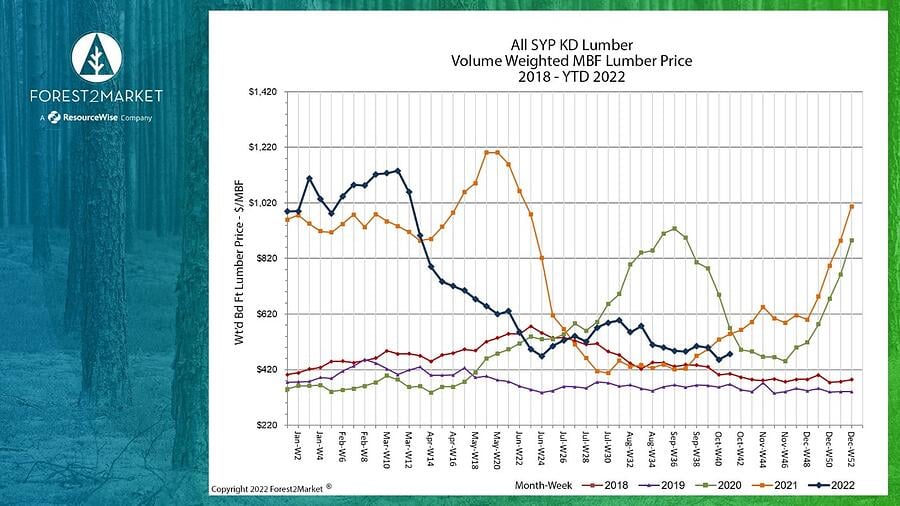 But softwood lumber isn’t the only building component that has experienced a decrease in price over the last several weeks. David Logan at National Association of Home Builders (NAHB) recently wrote: “The prices of building materials decreased 0.3% in September (not seasonally adjusted) according to the latest Producer Price Index (PPI) report. The PPI for goods inputs to residential construction, including energy, declined for the third consecutive month in September (-0.1%). Prices have fallen 2.3% since June, the largest three-month drop since April 2020.

“The price index of services inputs to residential construction decreased 0.8% in September, driven by lower building materials wholesalers’ margins and freight transportation prices. Services prices have declined each of the last six months by a combined 12.4% and are at the lowest level since 2021. Despite the six-month decline, the PPI for services inputs to residential construction is 3.3% higher than it was in September 2021,” Logan added. 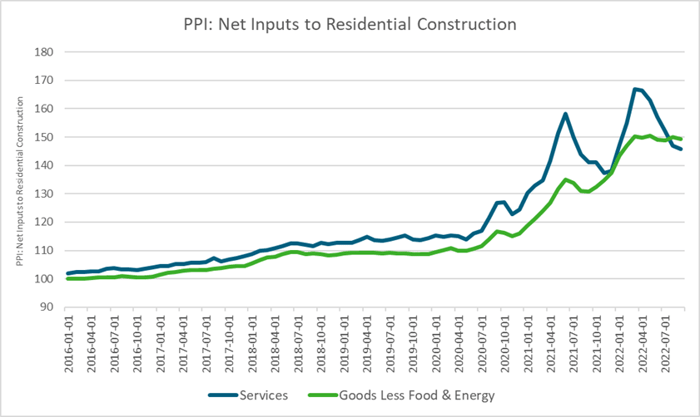 As noted above, rising inflation and interest rates are negatively impacting demand in the homebuilding sector. In response, major North American lumber producers have recently announced curtailments in British Columbia (BC):

While the first wave of curtailments is relegated to BC, a continued softening in the housing market could drive production cutbacks in facilities throughout the US as well. When the trend reaches the Southern lumber market and high-cost production is ultimately forced out, this will flatten the cost curve across the entire region. Mills that were relatively competitive just a few quarters ago could potentially become marginal producers (mid-4th quartile).

In the next significant economic downturn, what existing production will be pushed from “competitive” to “marginal” due to flattening of the cost curve?

Forest2Market has developed a fundamental cost model that can help Southern lumber producers understand which mills are at risk under various scenarios. Using the cost curve to play out potential situations (worst, moderate, best) around housing demand, remodel demand, etc., Southern sawmillers can better understand the risk of capacity exiting the market, how this will affect the floor price, and where their assets sit on the curve under each scenario.

This unique data allows executives and mill managers to dig into the details to understand precisely where they are most disadvantaged. They can then pinpoint improvements within the mill to maximize return on capital projects in a volatile market.

Lumber Prices
WRI Market Insights: Global Softwood Lumber Markets
Global trade of softwood lumber fell about 10% in the first half of 2022 compared to the same period in 2021. Most of...
END_OF_DOCUMENT_TOKEN_TO_BE_REPLACED

Housing Market
Housing Starts Plunge to Lowest Level in 19 Months
After jumping 12% in August due in part to strong demand from the multi-family construction sector, US housing starts...
END_OF_DOCUMENT_TOKEN_TO_BE_REPLACED