Last week, at the SFPA Expo 2013, I had the opportunity to talk to many in the industry about the SYP lumber market and the wild ride that we’ve been on in 2013.

Let me first say that the general mood of the participants was much more positive than the past few years, though somewhat restrained in light of the recent market downturns. Of course, everyone is disappointed that the rise in housing starts that occurred between October 2012 and March 2013 could not be sustained.

April’s housing start number fell significantly—down 16.5 percent from 1.02 million starts in March to 853,000 starts in April. That drop understandably has everyone feeling skittish, especially since improvements over the previous 6 months led to increased production, including additional shifts and kiln capacity expansions. Prices began dropping as soon as it became apparent that starts were not as robust as they had been.

How many housing starts can the market currently support? The general consensus 120 days ago was that we had adequate production for 850,000 starts. With small increases in production over the last four months through double shifts and increased kiln capacity, the 1 million mark is a good estimate of what the market can currently handle. (In fact, many dry kiln manufacturers are solidly booked for the remainder of this year. With existing kiln overhauls and upgrades and new installations in the works, many have enough quotes on the books for 2014.)

While it is possible that Northeast and Midwest markets will dry out and absorb the increased production and send prices in the opposite direction, a look at the recent past suggests that prices could continue to fall. Currently, prices are nearing their June 2012 level. In 2012, prices continued to fall another $50 until they reached the 2H2012 low at the end of July. 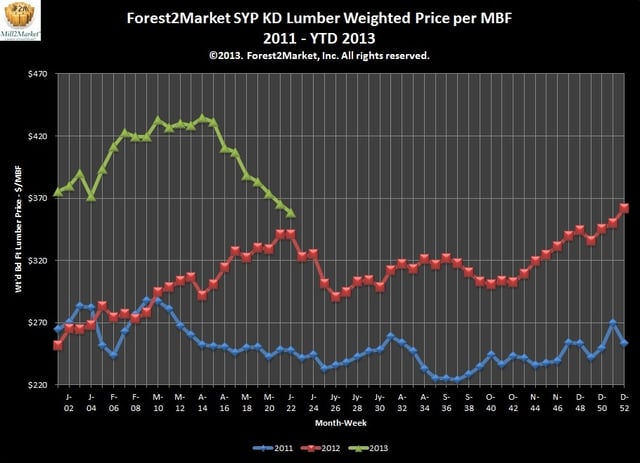 A comparison of housing starts and lumber prices tells a slightly different story. As Figure 2 shows, July 2012 starts were at 741,000 and began their gradual rise to 983,000 by the end of the year. This corresponds pretty closely with the increased market value of lumber we saw over the same period. Production was increasing but still short of demand. Starts remained stronger than expected through the first quarter, ending at over 1 million starts in March, and lumber values climbed in conjunction. 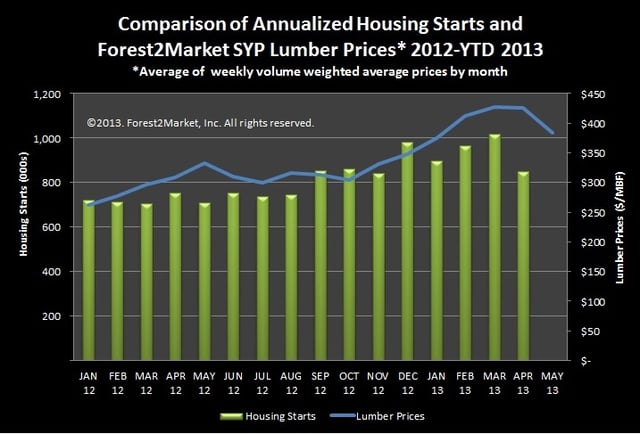 The beginning of the end of this trend started changing early in 2013, when lumber values increased faster than the rate of starts. This was exacerbated in March when anticipated spring purchases of floor inventory at secondary manufacturers and distributors did not move into the retail market. When the April housing start number was announced, it added support to the buyers’ market.

All this is really not bad or good news. It is just a reflection of how fragile the balance is right now. Markets are never really flat. Much like the pendulum of a clock, they are always in motion, stopping only momentarily at the apex of each cycle. For the moment, it looks like production has outpaced demand at the current housing start rate, and the pendulum is swinging in the opposite direction. Producers reverting back to single shifts, Northeast and Midwest markets opening up, a shortage in trucks or an increase in housing starts could move the pendulum just as easily in the opposite direction.

The fact that building permits remain strong is a good indication the market is steadier than the April starts number suggests. Permits usually turn into starts within 120 days. The following charts show the correlation between permits and starts, with starts lagging permits by 30 and 90 days.* Since annualized permits hit 1.017 million in April and 952,000 in February, it seems likely that housing starts will exceed 900,000 in May. 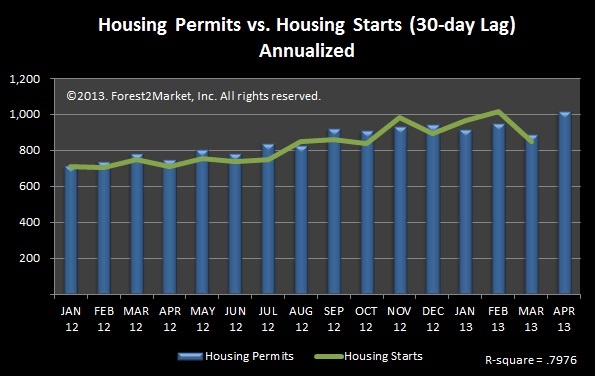 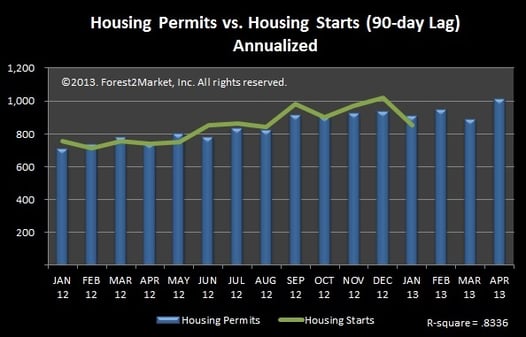 Forest2Market’s conservative forecast for housing starts shows that we will see slow and steady progress over the next two years and that starts are not expected to fall below 900,000 during this time. (Forest2Market forecasts housing starts in its Economic Outlook. Learn more.)

What I see is that we have a little bottle neck in demand that will work its way free in the next few months. In the meantime, logs in the south continue to be abundant and cost efficient.

Finally, I’d like to thank everyone at the SFPA for the excellent event. Everything from the organization, layout and entertainment to the choice of speakers was well planned and executed. Bob Browder from the SPIB and Buddy Showalter from the American Wood Council explained the reasons behind and the implementation of new design values. Kathy Abusow talked about the important work the SFI is doing to get equal recognition within the construction industry. Richard Harper from the USDA Forest Service and Dr. Greg Shueneman from the USFS Forest Products Lab both presented research they have been working on: Richard on southern pine tree size dynamics and Greg on wood nano cell technology. Overall, the meeting was informative and interesting.  Hats off to all those involved.

The technology shown at this year’s SFPA Expo was absolutely mind boggling. I applaud those producers that have set aside some of their recent profits and invested in this new technology. I am sure they will be paid back many times over in increased production and reduced overhead.

Forest2Market is proud to be part of this new age of technology. Our sophisticated high speed computers and statistical software can accumulate, calculate, and analyze in minutes actual market data from our members that would normally take others weeks or months to prepare. Join us and see how this technology can work for you. More information about Mill2Market.

Lumber Prices
Are Skyrocketing Lumber Prices a Sign of Things to Come?
If we’ve learned one thing about economic uncertainty during the COVID-19 pandemic, it’s that markets will always...
END_OF_DOCUMENT_TOKEN_TO_BE_REPLACED

Lumber Prices
North American Lumber Market: Adjusting to Uncertainty
As I wrote just a month ago—in the initial days of the coronavirus pandemic once it gripped the US— “Even if the...
END_OF_DOCUMENT_TOKEN_TO_BE_REPLACED