Southern yellow pine (SYP) lumber prices surged once again in week 8 as they eclipsed year-over-year (YoY) weekly prices for the first time in 2019. Forest2Market’s composite southern yellow pine lumber price for the week ending February 22 (week 8) was $456/MBF, a 5.3% increase from the previous week’s price of $433/MBF and a 0.44% increase from the same week in 2018. YTD average price from Forest2Market’s SYP index: $402/MBF. 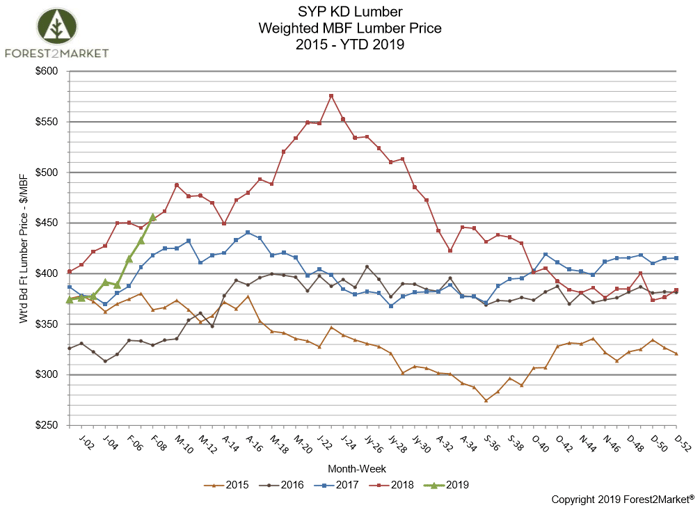 While last year’s price run seemed to be an anomaly driven in part by transportation issues in Canada during 1Q, we may be seeing a repeat of similar market dynamics as we head into early spring. The recent government furlough delayed the release of lots of critical data by nearly two months, but the current price surge may be representative of increased speculation rather than data-driven economics. That said, there are two dynamics to watch closely in the coming weeks:

A lot of lumber market momentum has been hinging on the latest housing starts data, though many of the other concerns are simply uncontrollable. We suspect that the market will react accordingly, albeit on a delayed basis. The weather-related problems, however, will continue to present supply-side challenges for mills and delivery issues for distributors and retailers in the near term. Will these challenges be enough to cause a repeat of the record-high pricing we saw in 2018? Let us know your thoughts in the comments below.

Lumber Prices
Are Skyrocketing Lumber Prices a Sign of Things to Come?
If we’ve learned one thing about economic uncertainty during the COVID-19 pandemic, it’s that markets will always...
END_OF_DOCUMENT_TOKEN_TO_BE_REPLACED

Lumber Prices
North American Lumber Market: Adjusting to Uncertainty
As I wrote just a month ago—in the initial days of the coronavirus pandemic once it gripped the US— “Even if the...
END_OF_DOCUMENT_TOKEN_TO_BE_REPLACED