If you’ve been paying attention to the performance of stock indices and listening to financial pundits in recent weeks, you know that the stock market is certainly not the economy. Rather, the market represents a “huge disconnect” from the reality of most Americans, per Robert Jenkins, head of global research at Lipper. “It gets more and more insane by the day,” he added.

This dynamic has of course carried over to commodities pricing in a global economy that is in uncharted territory. Manufacturers are cautiously metering production levels, trade flows and supply chains are adapting to life after lockdown, markets are still trying to figure out how to price in an induced global shutdown, and the pandemic (or, at least, the reaction to the pandemic) is proving to be more tenacious than once believed.

The country is growing increasingly frustrated with the inconsistency and indecisiveness associated with the situation, and the housing market is reflective of this pattern. Per Redfin, seasonally adjusted demand for housing in early June was 25% above pre-pandemic levels.

Naturally, lumber prices also reflect a similar dynamic. As construction crews in “non-essential” states have played catch up in recent weeks and are now getting back to work in earnest, demand for lumber has continued to skyrocket as it has since early June. Manufacturers are now cautiously watching the new housing market and ramping up capacity to meet the needs of builders.

In 1Q2020, the lumber market was showing signs of strength and demonstrated minimal volatility on a weekly basis. Forest2Market’s composite SYP lumber price for 1Q averaged $360/MBF, with volatility over the total time period in the range of +/-15%. However, as the pandemic really gripped the economy, prices jumped in mid-April as supply began to run tight due to curtailments. Prices then trended higher for nine consecutive weeks (a record for Forest2Market’s composite) and only briefly corrected course once in June. 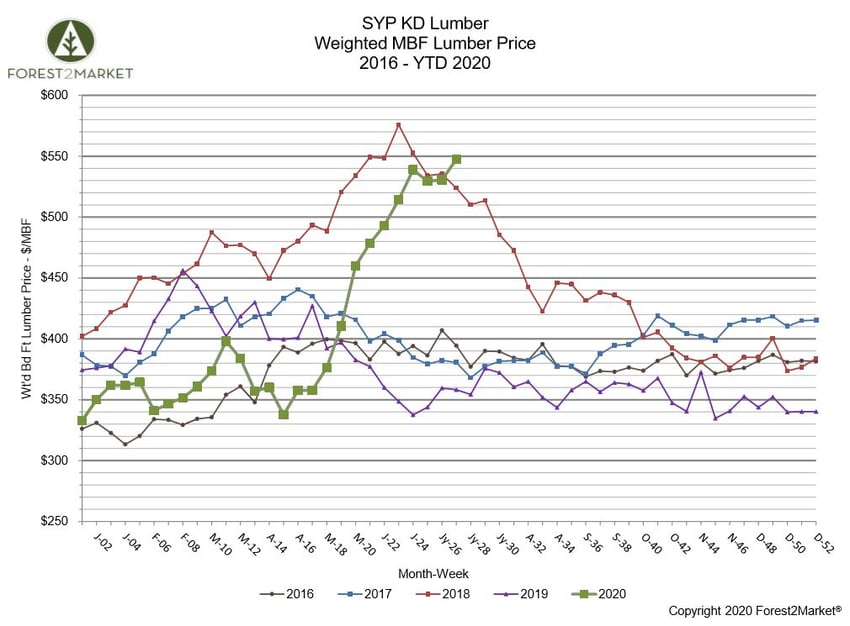 2020 will surely go down as the most unpredictable year in recent history, and we still have a long way to go. Despite the burdensome sense of uncertainty that has hamstrung several sectors of the economy, many analysts believe the economic underpinnings are solid enough to drive a “V”-shaped recovery in the coming months.

By nearly any metric, SYP lumber price performance has surprised everyone during 2Q, which is in line with the reality that we are, indeed, experiencing a growing rift between the stock market and the economy on Main St. What will this mean for lumber producers in the near term?

With plenty of access to sawlogs and favorable cost structures, southern lumber manufacturers are well-positioned to take profits over the next several months. This is a welcomed change for the sector, as many producers have been operating at lower margins for roughly 18 months. However, we know how quickly prices can reverse course and trend in the opposite direction; the 2018 data in the chart above appropriately illustrates this.

Howard Silverblatt, senior index analyst at S&P Dow Jones Indices, said the main difference between the economy and the stock market is that one is paying attention to the present and one is focused on where we are headed. “The market is saying, ‘We know where we are today, but where are we going tomorrow?’ In this case, tomorrow is 2021.”

There are a number of large hurdles to clear before we welcome 2021. In the interim, the silver lining for southern lumber producers is that logs are plentiful and lumber demand remains strong. 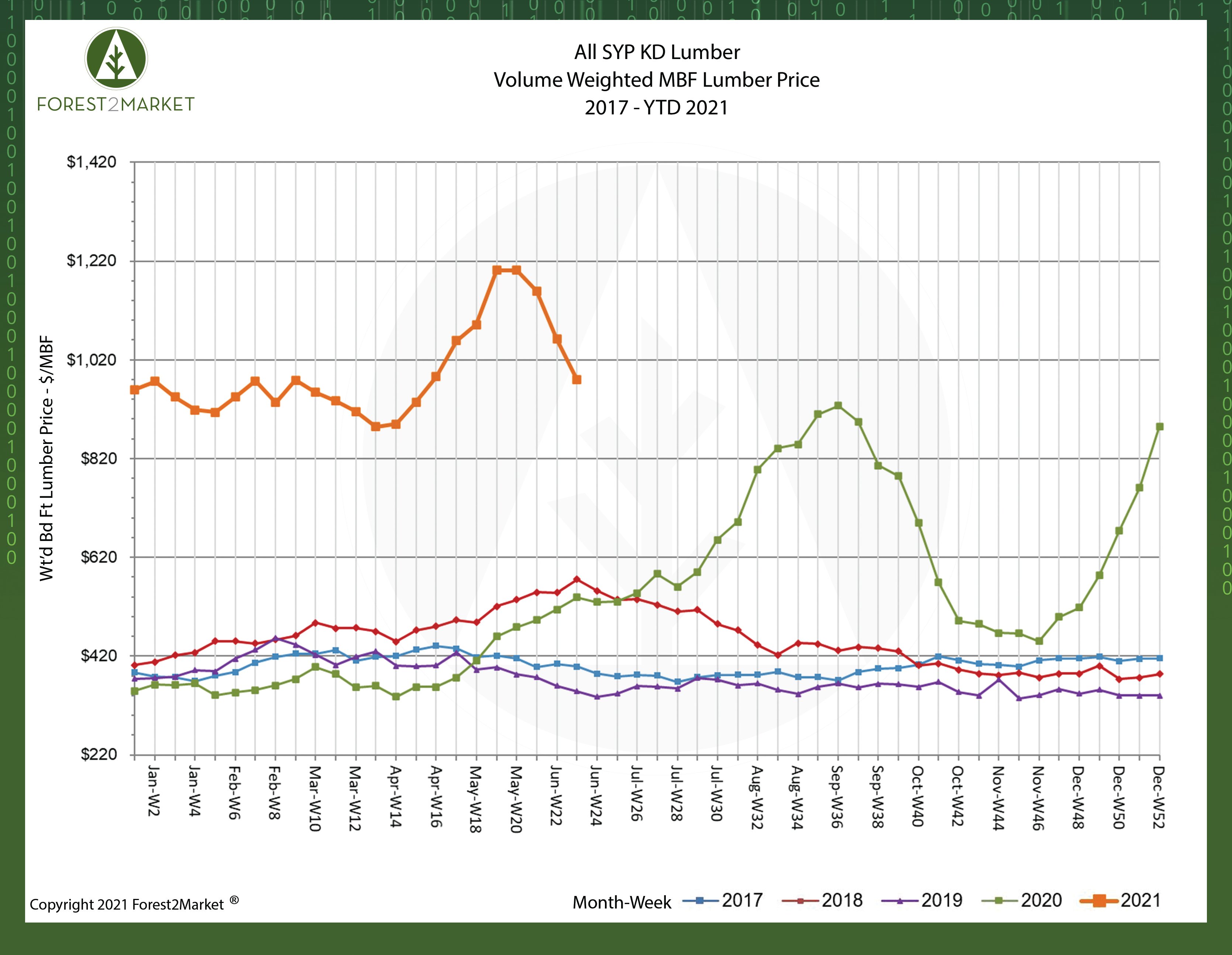 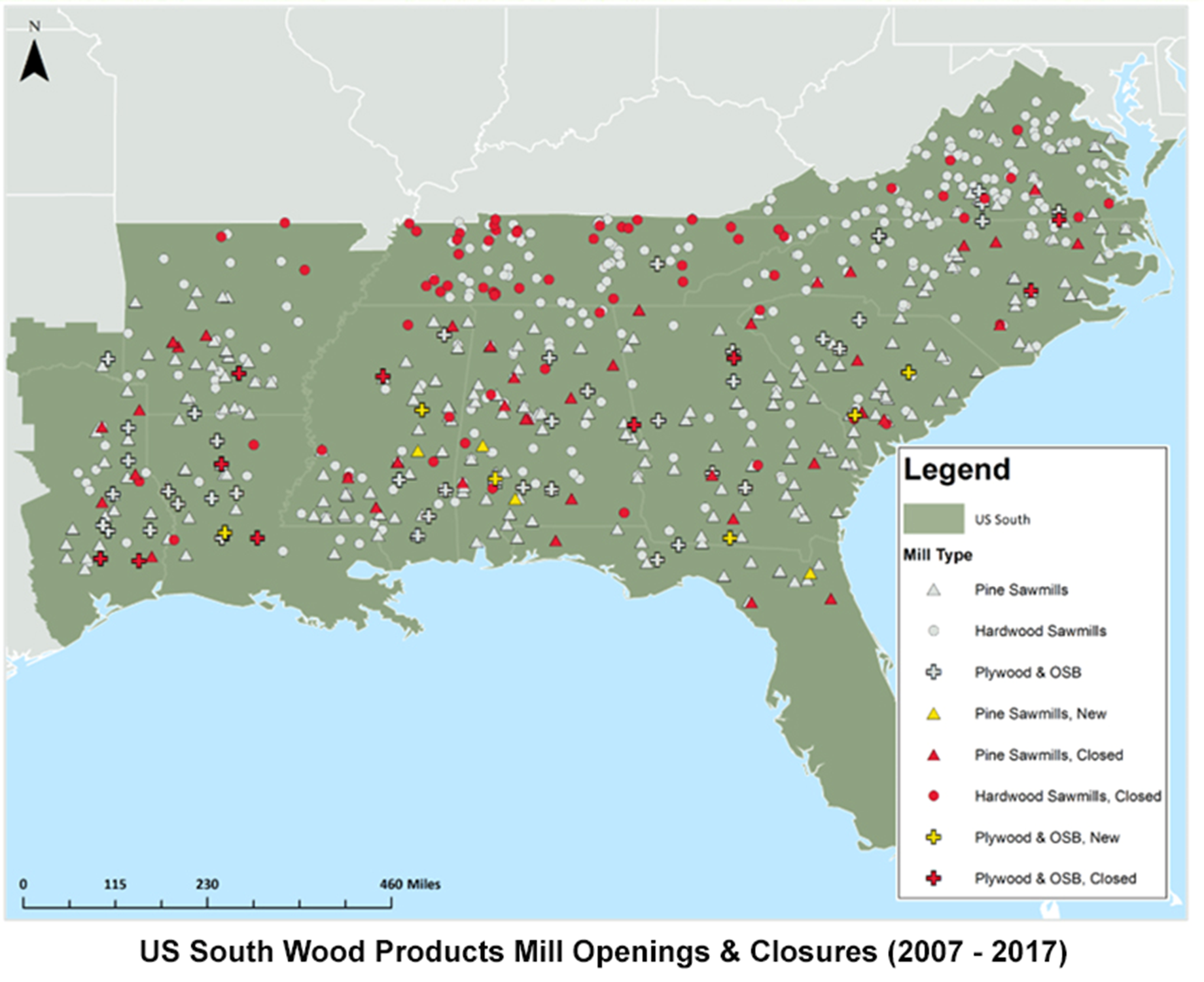 Lumber Prices
“Making More Lumber” Is Not So Simple
In 2Q2020, a tremendous supply/demand imbalance emerged in the North American softwood lumber market as a reaction...
END_OF_DOCUMENT_TOKEN_TO_BE_REPLACED 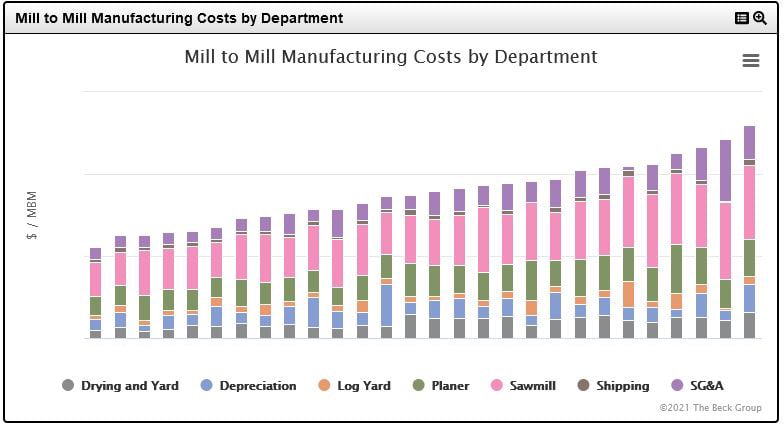 Lumber Prices
Southern Lumber Producers Must Innovate to Survive
The North American lumber sector has been front-page news for the past several months as exorbitant prices for...
END_OF_DOCUMENT_TOKEN_TO_BE_REPLACED