Over the last several decades, a combination of devastating wildfires and pest infestations have destroyed millions of acres of timber in the western US and Canada. The European forest community has watched this with some mix of disbelief and a hope that a similar situation couldn’t arise here. However, many European forests are now experiencing dire effects from a combination of drought, excessive heat, severe storms and an infestation of the Spruce Bark Beetle, and the situation is dramatically impacting the European roundwood market.

As a result of this combination of natural disasters, there is a record amount of dead and dying timber—primarily spruce softwood timber—standing in European forests that must be salvaged, and the market is currently flooded with damaged wood. The Czech Republic has been one of the hardest-hit countries, but the spread of the destructive beetle infestation has also hit Germany, Austria, Slovakia, France and other European countries.

The Bark Beetle poses such a unique threat to the region because it prefers softwood fiber—like spruce that dominates much of northern and eastern Europe—and these pests spread very rapidly throughout the forest once they take up residence. Forestry experts warn that the impact of the beetle infestation will have significant impacts on Europe’s conifer forests for decades. 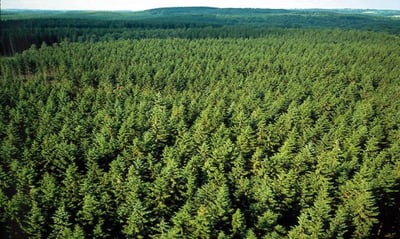 For instance, a recent Reuters article notes that “The Czech Forest think-tank said about 30 million cubic metres of timber was affected this year - higher than earlier estimates and nearly double the 18 million last year, which was already a multiple of amounts in previous years.” In the Czech Republic, spruce forests comprise roughly 1.4 million hectares of land with a volume of 380 million cubic meters (m³). Based on these current removal levels, harvests are significantly outpacing growth in Czech forests.

The situation in Germany is equally dire; the country has harvested 11.32 million of beetle-damaged timber so far this year, which is already 50% more than in all of 2018. One-third of Germany is covered with forests that total over 11.4 million hectares, and spruce makes up the largest proportion at 26% (3 million hectares), or approximately 1 billion m³ of fiber.

What Makes the Outbreak so Severe?

A recent article in Science Daily notes that, “Higher temperatures and intensifying summer droughts put trees and especially spruces under great pressure. Spruces are originally from mountain regions and it was only when they were widely planted out of economic interest that the conifer species also populated lower elevations. Spruces are not very resistant to heat and drought. Long-term water shortage weakens the tree's defences against the bark beetle -- chemical substances that harm the beetles and increased resin release which clogs up the beetle tunnels.”

The article continues, “There are countless factors that influence the population size of insects such as the bark beetle. Natural enemies, pathogens, interspecific and intraspecific competition, landscape structures, tree population, resilience of the preferred host, temperature and precipitation. According to Jörg Müller [professor at the Department of Animal Ecology and Tropical Biology at the University of Würzburg and Deputy Manager of the Bavarian Forest National Park], it is largely unknown which role each factor plays in the population dynamics of forest insects.

To remedy this lack of knowledge, the scientists suggest pooling the worldwide data, identifying knowledge gaps on the population dynamics of spruce bark beetles and other forest insects and using this as the basis to answer key questions on the interaction of various factors through new data surveys. In a second step, the insights gleaned from the results will be tested during experimental field studies to derive recommendations for action.”

How is the Outbreak Impacting Forest Markets?

In Germany, where 48% of the working forests are privately-owned, an infestation of bark beetles is very difficult to control. Much like the US South, the timberland ownership base is highly fractured; approximately half of the private forested area is managed by owners with less than 20 hectares, creating a complex network of ownership and actual forest. This makes it nearly impossible to control a major pest outbreak quickly or effectively, as the beetles can simply travel across the network and infect timberlands that belong to multiple owners. European timberland owners must take a more proactive stance in managing their forests to minimize risks and the potential for widespread losses.

Another major challenge is the in-country utilization of the affected/damaged timber. For example, additional log supply is simply not needed at regional sawmills; most of these facilities are working at maximum capacity and excess volume is not essential. While China seems to be the exception, selling the salvaged timber in many foreign markets is also not a likely solution simply because it is not economically viable based on the logistics challenges and associated costs.

Currently, a majority of the beetle-damaged log volume from Europe is being exported to China; spruce log exports have increased more than 400 percent compared to relatively flat exports over the last several years. However, the excess volume of affected logs is also driving down timber prices and demand in a number of European markets. For instance, in countries that have experienced the most damage, wood raw material prices are so low that wood is even being offered for free in some cases.

The single largest challenge facing European timberland producers right now is a temporary market saturated with cheap, damaged wood. As a result, many timberland owners are simply choosing not to harvest or sell their unaffected timber based on current low values, as they can’t maintain profits based on the such prices. Though this development is affecting wood supply and demand throughout Europe, it is only a matter of time before the situation ripples out to other foreign markets.

Timber Prices
How Does a Soaring Lumber Market Impact Timber Prices?
After blasting past the previous all-time high achieved in 2018, southern yellow pine (SYP) lumber prices are now at...
END_OF_DOCUMENT_TOKEN_TO_BE_REPLACED

Timber Prices
How Much Money is an Acre of Timber Worth?
Recent swings in wood fiber demand resulting from the COVID-19 pandemic are vivid examples of the importance of...
END_OF_DOCUMENT_TOKEN_TO_BE_REPLACED