Southern yellow pine (SYP) lumber prices inched up towards the end of January, demonstrating the first palpable increase of the year. Forest2Market’s composite southern yellow pine lumber price for the week ending January 25 was $389/MBF, a slight 0.8 percent decrease from the previous week’s price of $392/MBF (and a 13.6 percent decrease from the same week in 2018), but a 3.7 percent increase from its starting point of the year ($375/MBF). YTD average price from Forest2Market’s SYP index is $382/MBF.

Early 2019 price performance suggests that the market may not be as soft as some of the predictions have warned; however, official housing starts data from the US Census Bureau has been on hiatus due to the government shutdown. As the inventory-building season gets under way in the US, the global lumber market is shifting to compensate for some of the trade duties and tariffs instituted over the course of the last two years. 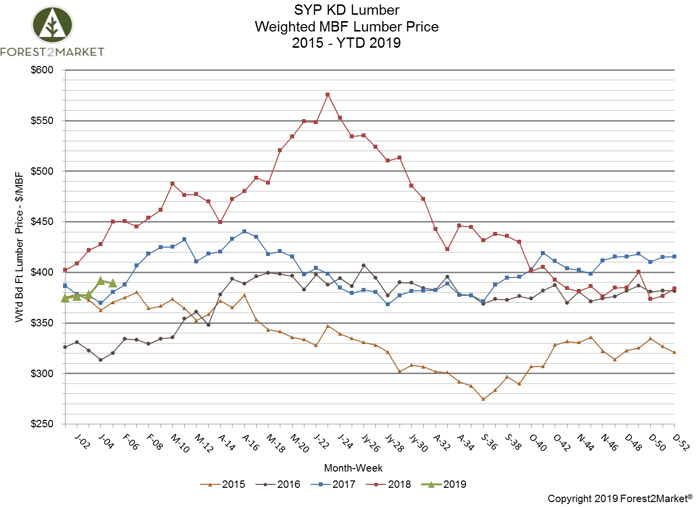 A recent article by MarketWatch and an infographic from the National Association of Home Builders (NAHB) detail some of these changes and illustrate those countries that are most affected by the ongoing trade disputes over lumber. Softwood lumber import tariffs averaging roughly 21 percent were levied on Canada last year and those tariffs are rearranging the global supply chain; producers in the US South have increased capacity and exporters from overseas have filled any gaps in the market. 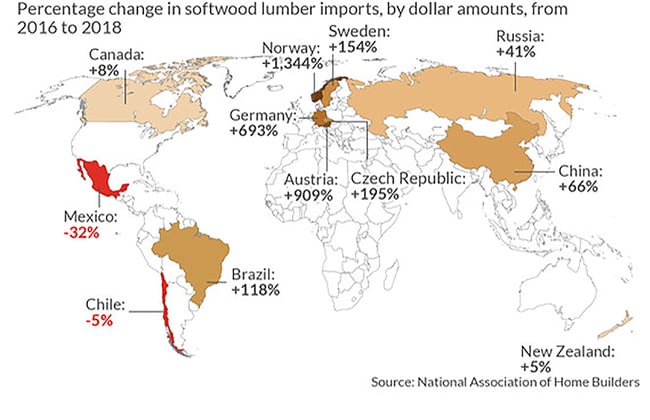 The infographic covers a 2-year period and while some of the increases do appear to be extreme—particularly Norway—the percentage changes are in dollar amounts, not board feet, tons, cubic meters, etc. Context is also important, as MarketWatch notes that “the map, which makes Norway look like the biggest winner, doesn’t point out that country’s share of the total has gone from 0.00% in 2016 to 0.03% in 2018.”

British Columbia (BC)—Canada's largest lumber-producing province—exported 8% less lumber in October 2018 versus the same month in 2017. As Pete Stewart recently noted, tariffs added to lower lumber prices combined with restricted log supply will result in the continued shift in production capacity. BC will likely reduce capacity by 1BBF in 2019, which will be offset by increased capacity in the US South that will marginally affect supply.

Many of Canada’s top producers are already manufacturing lumber in the US South to take advantage of cost benefits while remaining competitive in the global market. For example, Canfor's $120 million state-of-the-art softwood lumber mill is set to open later this year in Washington, Georgia. The facility will have a production capacity of 275 MMBF and will employ best-in-class mill technologies.

NAHB also reported that lumber price hikes between January 2017 and late 2018 were enough to increase the average price of a single-family home by over $6,000, adding to the headwinds the housing market is likely to face in the coming month.

While we believe most housing start forecasts are overly optimistic, the market will demonstrate some growth over the next few years. We think total starts will average 1.242 million units in 2019 (-1.4 percent relative to 2018), and rebound in 2020 to 1.286 million units (+3.6 percent relative to 2019). With an estimated 6 BBF of additional capacity coming online by the end of 2020 via combined greenfield mill expansions and newly-rebuilt/refurbished facilities in the US South, there should be ample lumber supply to meet market demand. Lower manufacturing costs in new and upgraded mills will also allow producers to efficiently manufacture SYP lumber through any market valleys or anomalies in the future.

Lumber Prices
Are Skyrocketing Lumber Prices a Sign of Things to Come?
If we’ve learned one thing about economic uncertainty during the COVID-19 pandemic, it’s that markets will always...
END_OF_DOCUMENT_TOKEN_TO_BE_REPLACED

Lumber Prices
North American Lumber Market: Adjusting to Uncertainty
As I wrote just a month ago—in the initial days of the coronavirus pandemic once it gripped the US— “Even if the...
END_OF_DOCUMENT_TOKEN_TO_BE_REPLACED