Per a new report released by the U.K. Department for Business, Energy and Industrial Strategy (BEIS), renewable sources of energy fueled a record 33 percent of the UK’s electricity generation in 2018, which was up 3.8 percent from the previous year. Total renewable generation capacity grew 10 percent to 44.3 GW.

According to official data published in the Digest of UK Energy Statistics 2019 (DUKES), primary energy production in the UK increased 2.9 percent year-over-year (YoY) in 2018. A press release announcing the new report notes that “The rise was driven by growth in output from primary oil, wind, solar and biomass. Overall fossil fuel growth increased, but with coal output falling to a record low level. Final energy consumption rose by 1.1 per cent, as demand for heating increased during the ‘Beast from the East’ weather storm in February and March. On a temperature adjusted basis, final energy consumption rose by 0.2 per cent.”

Other statistics on UK electricity consumption and generation from the report include: 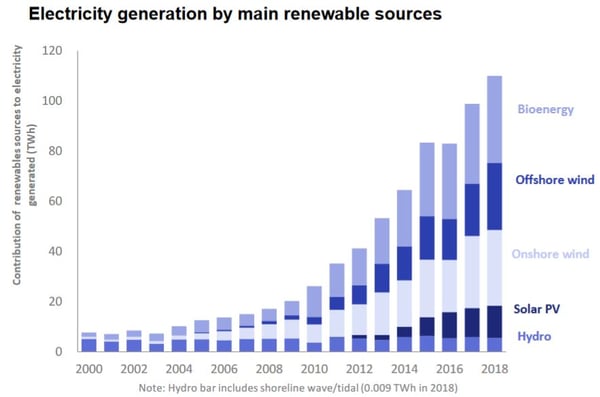 In 2018, the UK derived 19 percent of its primary energy from low-carbon sources, with 39 percent coming from nuclear power. The second largest component of low-carbon was bioenergy, accounting for 37 percent of total low-carbon energy sources. Energy supply from biofuels increased by 11 percent with additional use of anaerobic digestion, wood pellets and energy from waste.  “Generation from plant biomass increased by 15 percent, partly due to new plants being converted from coal to biomass at Lynemouth and Drax.”

Bioenergy
The Value of Carbon Emission Avoidance with Biopower Generation
Per a recent report published by the National Petroleum Council (NPC)—an advisory committee that represents the...
END_OF_DOCUMENT_TOKEN_TO_BE_REPLACED

Bioenergy
WSJ’s Incomplete Reporting Perpetuates Misconceptions About Bioenergy
A recent article published in the Wall Street Journal notes that the increased consumption of wood pellets in the...
END_OF_DOCUMENT_TOKEN_TO_BE_REPLACED