Developing a new bioenergy project is complex. As biomass feedstock is typically the greatest variable operating cost in the proforma, it is critical to understand the availability, sustainability of supply and cost of biomass. To conduct proper feedstock due diligence in a supply region, it is therefore essential to understand not only the resources of the region, but also the structure of the forest products industry and nuances of local feedstock supply.

The US South and British Columbia (BC) both have vibrant forest industries built upon their access to timber—each capable of providing the wood resources needed to support a bioenergy project. However, while the timber industry is viable in both regions, there are several differences between the two that must be taken into consideration when performing feedstock diligence.

Market Structure of the Industry

The forest products industry is an important industrial sector in both regions, which is led by the manufacture of solid wood products (dimensional lumber and panels) and pulp (as well as paper), with bioenergy representing a minor portion in both markets. Timber harvests in the South represent approximately 225 million green tons per year—roughly three times the volume of BC. In the South, nearly 2/3 of the harvest volume is pulpwood and 1/3 is sawtimber. In BC, almost all the timber harvest is sawtimber. The forest industries in each area, therefore, have developed independently of one another—driven by the differences unique to each region.

The forest in the two regions is significantly different due to the natural terrain of the areas. In the South, the land is relatively flat compared to BC, which has a significant portion of its landmass in mountainous and steep, high-plateau regions. The mountainous terrain of BC often requires harvest crews to employ cable systems to move the logs from their point of harvest to the landing deck. Conversely, in the South’s flat terrain, harvesting is typically accomplished using a feller-buncher to cut the trees and a skidder to move the cut trees to the landing deck. This difference makes harvesting timber in BC more expensive compared to the South.

Additionally, extracting logs is more expensive in BC due to several other factors.

Timber harvest economics and the structure of the industry—the price for a tree as it stands in the forest—is referred to as the “stumpage” price. Typically, larger trees bring higher stumpage prices. Large sawlogs typically sell for 3+ times the stumpage price of smaller pulpwood logs. For example, in the South, pulpwood sized wood (3-7” in diameter) can sell for under $10/green ton while sawlogs (12+” diameter) can sell for over $40/green ton. 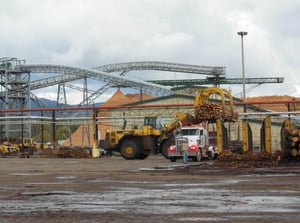 Because BC timber has the higher imbedded costs listed above, it is less economical to harvest small diameter pulpwood. Only by harvesting larger, higher value sawlogs can the cost of the product (the harvested log) carry the high associated cost. Therefore, in BC, the forest products sector is structured around the utilization of harvested sawlogs for dimensional lumber production.

In the manufacturing process of dimensional lumber, clean residual chips are produced as a byproduct of the round portions of the logs once they are converted to rectangles that can be more easily sawn into lumber. The BC pulp and wood pellet industries generally rely on the availability of mill residual chips, as it is less economical to recover the smaller-diameter trees. In BC it is not uncommon for small diameter material to be left on the roadside after harvest as shown in the photo below.

In the South, the lower cost (compared to BC) of growing and harvesting timber allows pulpwood to constitute a much larger component of the market. Pulp mills (and bioenergy plants) will secure all the available mill residuals that exists in a local region and then purchase as much pulpwood as is required to satisfy the balance of their demand.

A vast majority of timberland in the South (87%) is owned by private owners—both corporations and individuals. Public/government ownership makes up approximately 13% of the timberland acres. Timber material flowing to the market is driven by economic factors; wood flows when there are viable markets, and it flows to the highest value use in the region. The growth, harvest and care/management of the forests in the South is dictated by long-term economics and value to the timberland owners.

Conversely, in BC almost all timberland is owned by the provincial government (Crown). Admittance to the timberland is granted as long-term “cutting rights” access to large tracts of timber with fees paid to the province for the right to extract the timber. The government has oversight and control of the management of the forest and how much timber is harvested, rather than private landowners who manage their land individually and have the flexibility to respond to market signals.

There are significant standing timber inventory/resources in both the South and BC. The diligence of feedstock in support of a bioenergy project must address certain critical questions:

As stated above, both regions of North America can support projects in the emerging bioenergy sector. However, diligence associated with feedstock procurement must be carried out differently in the two regions. Forest2Market’s knowledge allows us to support project developers and financiers in both of these important wood biomass regions.