Total industrial production (IP) increased 0.5 percent in March (+1.5 percent YoY), thanks to a largest-ever jump of 8.6 percent in the output of utilities as the demand for heating returned to seasonal norms. For 1Q2017 as a whole, total IP also rose at an annualized rate of 1.5 percent. While total IP stepped up in March, manufacturing output fell 0.4 percent (+0.3 percent expected), led by a large step-down in the production of motor vehicles and parts; factory output aside from motor vehicles and parts decreased by 0.2 percent.

The Institute for Supply Management’s (ISM) monthly survey indicated that the expansion in US manufacturing decelerated further during April. The PMI registered 54.8 percent, down 2.4 percentage points from March. (50 percent is the breakpoint between contraction and expansion.) Four sub-indexes (production, inventories, exports and imports) had higher values; the rest were lower. The pace of growth in the non-manufacturing sector rebounded from March’s drop when rising by 2.3 percentage points, to 57.5 percent. Three sub-indexes (employment, imports, and inventory sentiment) were lower; the rest were higher. 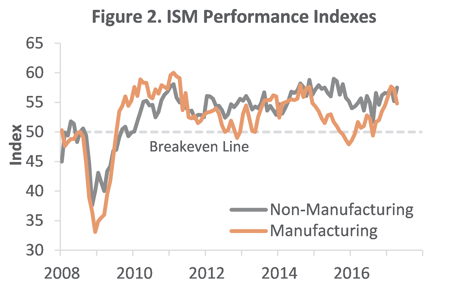 The consumer price index (CPI) decreased 0.3 percent in March, the first MoM decrease in the seasonally adjusted all-items index since February 2016. A 6.2 percent decline in the gasoline index was the largest contributing factor. The YoY rise in the all-items index slowed to +2.4 percent, concurrent with a continuing deceleration in the energy index (+10.9 percent). However, consumers remain pressed by the cost of rent (+3.9 percent YoY) and medical care services (+3.4 percent) rising faster than wages.