After annual revisions to historical data, total industrial production (IP) was shown to have inched down 0.1 percent in March following a fractional increase (+0.1 percent) in February; 1Q total IP slipped by an annualized 0.3 percent. Manufacturing output was unchanged in March after declining in both January and February; losses by wood products and motor vehicles were offset by gains in primary metals, computer and electronic products, and nondurable goods.

“The factory sector has taken the brunt of the dislocations associated with tariffs and uncertainties around trade policy as well as dealing with the headwind of a stronger [U.S. dollar],” said Amherst Pierpont Securities’ Stephen Stanley. “Thus, it is not surprising that manufacturing activity is underperforming the overall economy.” 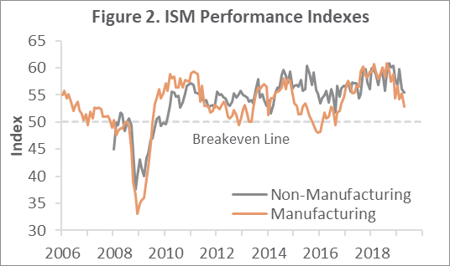 The Institute for Supply Management’s (ISM) sentiment survey for April indicated the expansion in US manufacturing decelerated (-2.5PP) to 52.8 percent. Inventories (+1.1PP) and order backlogs (+3.5PP) were the only sub-indexes exhibiting significant gains. The pace of growth in the non-manufacturing sector also decelerated (-0.6PP) to 55.5 percent. Increases in export (+4.5PP) and import (+3.5PP) orders bucked the general trend of falling sub-index values.

Of the industries we track, only Wood Products and Real Estate did not expand. “Spring selling season is here for residential construction,” observed one Construction respondent. “Sales are coming, but negotiations are now the norm. Traffic is higher than the last three months, mostly due to lower mortgage rates.”

IHS Markit’s April survey headlines were mixed relative to those of ISM. They “indicate a marked slowing of the U.S. economy at the start of 2Q,” wrote Markit’s Chris Williamson, “suggesting the robust start to the year has lost some momentum. Businesses reported the weakest output and sales growth for two years, indicative of GDP growth slowing to 1.9 percent in April.

The consumer price index (CPI) increased 0.4 percent in March (+1.9 percent YoY). The energy index (+3.5 percent) accounted for about 60 percent of the all-items MoM increase. The gasoline index increased sharply (+6.5 percent) and electricity also rose (+0.4 percent); the natural gas index edged lower (-0.1 percent). The food index also increased (+0.3 percent), with the indexes for food at home and food away from home both continuing to rise.

US forest industry
2020's Impact on the PNW Forest Sector
Like other regions in the US, the forest products industry in the Pacific Northwest (PNW) has remained surprisingly...
END_OF_DOCUMENT_TOKEN_TO_BE_REPLACED

US forest industry
US Forest Industry Performance for November: P&P, Lumber Remain Strong
US forest industry performance in September and October was recently reported by both the US government and the...
END_OF_DOCUMENT_TOKEN_TO_BE_REPLACED