Total industrial production (IP) edged up by 0.1 percent in July (+4.2 percent YoY, the strongest gain in more than six years) as rising manufacturing output (+0.3 percent) offset declines from mining (-0.3 percent) and utilities (-0.5 percent). This is down from gains averaging 0.5 percent over the previous five months.

After a buildup in momentum since the beginning of 2017—buoyed by a recovery overseas, rising energy prices, and the Tax Cuts & Jobs Act (TCJA) stimulus—July’s deceleration may be symptomatic of a plateauing housing sector and rising trade restrictions. On the other hand, “given that there was a big upward revision to June, and that some of the disappointment in July reflected the volatile utilities area, this is a solid set of figures that points to continued momentum for the U.S. industrial sector at the start of 3Q,” said Andrew Grantham of CIBC World Markets.

The Institute for Supply Management’s (ISM) monthly sentiment survey showed that the expansion in US manufacturing accelerated (+3.2PP) in August, to 61.3 percent. The only sub-indexes with lower August values included input prices, exports and imports. The pace of growth in the non-manufacturing sector also quickened (+2.8PP) to 58.5 percent. The only service sub-indexes to decelerate were input prices and imports.

Of the industries we track, Wood Products and Ag & Forestry contracted in August. Respondent comments included the following: 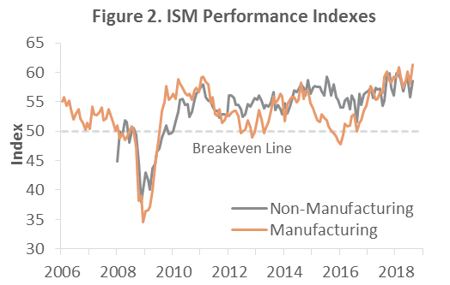 The consumer price index (CPI) increased 0.2 percent in July (+2.9 percent YoY, the same increase as for the period ending June). The shelter index (+0.3 percent) accounted for nearly 60 percent of the seasonally adjusted monthly increase in the all-items index. The energy index fell 0.5 percent, as all the major component indexes declined.

The producer price index (PPI) was unchanged in July (+3.3 percent YoY). A 0.1 percent rise in the index for final demand goods offset a similar decline in prices for final demand services. “Both the headline and core PPIs were constrained by a 0.8 percent drop in the volatile ‘trade services’ component, which measures profit margins for retailers and wholesalers,” said Ian Shepherdson, chief economist at Pantheon Macroeconomics. “This is a correction, following a run of big increases; it likely does not mark the start of a sustained run of smaller core PPI numbers.”

US forest industry
US Labor Market Wraps Up 2019 With a Bang
Every month, Forest2Market publishes updated forecasting products designed specifically for participants in the...
END_OF_DOCUMENT_TOKEN_TO_BE_REPLACED