Total industrial production (IP) and manufacturing production both jumped 1.1 percent (but -0.8 percent YoY for total IP) in November after declining in October. These sharp November increases were largely due to a rebound in the output of motor vehicles and parts following the October 25 end of a strike at General Motors. Excluding motor vehicles and parts, the indexes for total IP and for manufacturing moved up 0.5 percent and 0.3 percent, respectively. Mining production (mostly oil extraction) edged down 0.2 percent, while the output of utilities increased 2.9 percent. 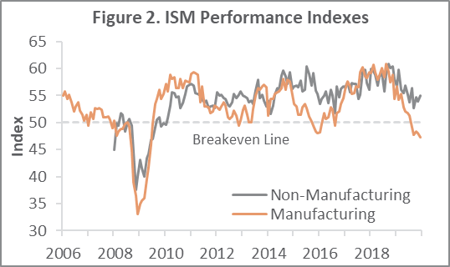 The Institute for Supply Management’s (ISM) monthly sentiment survey showed that in December, US manufacturing contracted at a somewhat faster pace. The PMI registered 47.2, down 0.9PP from the November reading, and the lowest index value since June 2009. Production (-5.9PP) and customer inventories (-3.9PP) were noteworthy negative changes, while the input-prices index (+5.0PP) pushed back into positive territory.

Of the industries we track, only Ag & Forestry did not contract. “Weather and the holiday season have had an impact on residential new construction sales and production,” wrote a Construction respondent. “While demand is outstripping supply in the housing market, business is down due to global trade insecurity causing affordability, labor and cost pressures.”

While IHS Markit’s December survey headlines had a positive slant, the accompanying commentary was more sober. “The U.S. manufacturing sector continued to recover from the soft patch seen in the summer, ending 2019 with its best quarter since the early months of 2019,” wrote Markit’s Chris Williamson. However, “the overall rate of expansion nevertheless faltered somewhat in December and remains well below that seen this time last year, suggesting producers are starting 2020 on a softer footing than they had enjoyed heading into 2019.”

Global Forest Industry
Effects of the COVID-19 Pandemic on Brazil’s Forest Sector
Some players in the Brazilian forest-based industry are doing well in the face of the economic crisis caused by the...
END_OF_DOCUMENT_TOKEN_TO_BE_REPLACED