US forest industry performance in December 2019 and January 2020 was recently reported by both the US government and the Institute for Supply Management.

Total industrial production (IP) declined 0.3 percent in December (-1.0 percent YoY), as a warm-weather-induced decrease of 5.6 percent for utilities outweighed increases of 0.2 percent for manufacturing and 1.3 percent for mining. For 4Q as a whole, total IP moved down at an annual rate of 0.5 percent. Total IP contracted during seven months in 2019, the worst record since 2015. 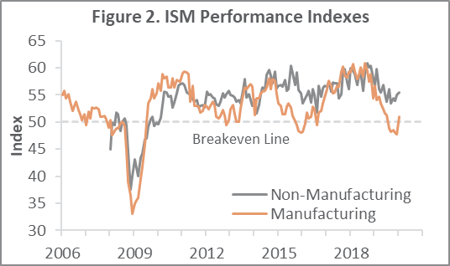 Of the industries we track, only Paper Products and Real Estate did not expand. Respondent comments included the following:

As has become common in recent months, findings of IHS Markit’s January surveys were mixed relative to their ISM counterparts. Manufacturing growth slowed, whereas growth in service-sector business activity accelerated to a 10-month high.

“The PMI data indicate that the U.S. economy is ticking along at a steady but unspectacular annualized rate of growth of approximately 2 percent at the start of 2020,” wrote Markit’s Chris Williamson. “Growth has gained some momentum from the lows seen in the fall as the service sector enjoys stronger growth and manufacturing has also shown signs of the trade-led downturn easing. However, factory activity remains worryingly subdued, and optimism about future growth across the business community as a whole continues to run at one of the lowest levels seen over the past decade.

The consumer price index (CPI) rose 0.2 percent in December (+2.3 percent YoY) after rising 0.3 percent in November. The indexes for gasoline (+2.8 percent), shelter (+0.2 percent), and medical care (+0.4 percent) accounted for most of the MoM increase in the headline index. These results confirm the observation by MarketWatch’s Jeffry Bartash that “consumer prices rose in 2019 at the fastest pace since 2011, but most of the increase was concentrated in rent, gas and medical care.”