After declining 0.5 percent (previously -0.1 percent) in May, total industrial production (IP) rose 0.6 percent in June (+3.8 percent YoY). For 2Q2018 as a whole, total IP advanced at an annualized rate of 6.0 percent, its third consecutive quarterly increase. Manufacturing output bounced back (+0.8 percent) in June, thanks mainly to a truck parts supplier resuming production after an earlier fire. Factory output, aside from motor vehicles and parts, increased 0.3 percent.

The Institute for Supply Management’s (ISM) monthly sentiment survey showed that the expansion in US manufacturing decelerated (-2.1PP) in July, to 58.1 percent. The only sub-indexes with higher July values included employment and inventories. The pace of growth in the non-manufacturing sector also slowed (-3.4PP) to 55.7 percent. Only employment, input prices and imports exhibited significant increases.

All of the industries we track expanded in July. As the following examples indicate, trade and tariff concerns were common themes among respondent comments:

To put the Wood Products respondent’s comment in perspective, we note that YTD through May, US softwood lumber exports to China and Canada (the top two US softwood lumber export destinations) were up, respectively, 46 percent and 26 percent relative to 2017. Thus, we interpret the comment to mean domestic demand has not grown enough to compensate for a slowdown in Chinese orders (June exports to China: -6.8 percent MoM). 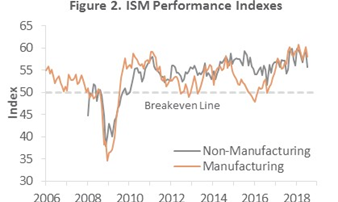 US forest industry
US Manufacturing, Forest Industry Slam on Brakes in April
US forest industry performance in March and April was recently reported by both the US government and the Institute...
END_OF_DOCUMENT_TOKEN_TO_BE_REPLACED