US manufacturing was expanding at either the fastest rate since August 2014 or the slowest since September 2016, depending upon one’s choice of sentiment survey. The Institute for Supply Management’s (ISM) PMI showed a 2.9 PP jump in June whereas IHS Markit’s manufacturing PMI dropped by 2.7 PP (to 52.0 percent). At least the service-sector surveys were more consistent, with both reporting accelerating activity.

All of the industries we track in the ISM surveys expanded. “Labor continues to be constrained,” observed one Construction respondent, “driving cost increases.”

A 2.7 percent decrease in the energy index, led by gasoline’s 6.4 percent drop, pulled the consumer price index (CPI) down by 0.1 percent MoM in May. The YoY rise in the all-items index slowed to +1.9 percent, from April’s +2.2 percent. Although the YoY change in CPI is moderating, several of the categories most important to consumers—including rent (+3.8 percent YoY), energy (+5.4 percent) and medical care (+2.5 percent)—continue to outpace wage growth. 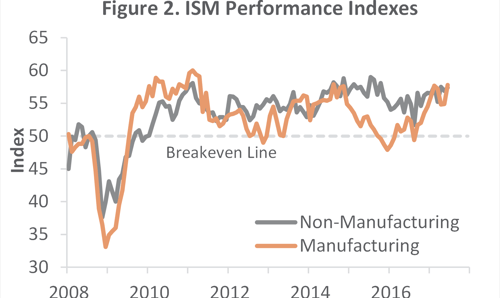 The producer price index (PPI) was unchanged in May (+2.4 percent YoY) thanks to a 0.3 percent increase in the index for final demand services (mainly fuel and lubricants retailing) offsetting a 0.5 percent decline in prices for final demand goods (mainly gasoline). I.e., the costs associated with selling gasoline rose even while the price of the product itself declined.

Meanwhile, US forest industry performance by sector was positive with the exception of Wood Fiber: