After an April gain of 0.9 percent, total industrial production (IP) edged down 0.1 percent in May (but +3.5 percent YoY). Manufacturing production fell 0.7 percent, largely because truck assemblies were disrupted by a major fire at a parts supplier; excluding motor vehicles and parts, factory output moved down 0.2 percent. The index for mining rose 1.8 percent, its fourth consecutive month of growth; the output of utilities moved up 1.1 percent.

Wood products and paper exhibited decidedly mixed behavior. In terms of output, capacity utilization and capacity, paper either declined or held steady. Wood products, on the other hand, added capacity but did not boost output.

The Institute for Supply Management’s (ISM) monthly sentiment survey showed faster expansion in US manufacturing during June. The PMI registered 60.2 percent, up 1.5PP from the May reading. “This indicates strong growth in manufacturing,” said ISM’s Timothy Fiore, “led by continued expansion in new orders, production and employment. However, inventories continue to struggle... as a result of supplier deliveries slowing further.” Agora Financial’s David Gonigam noted that the PMI slow-supplier-deliveries index was 68.2, representing the worst disruption to supply chains since the “oil shock” of the mid-1970s.

The pace of growth in the non-manufacturing sector also rose (+0.5PP), to 59.1 percent. Most sub-indexes exhibited significant changes, although those changes were mixed. All of the industries we track except Ag & Forestry expanded in June. Inflationary influences on costs from tariffs, freight issues and labor shortages were common themes among commenters. 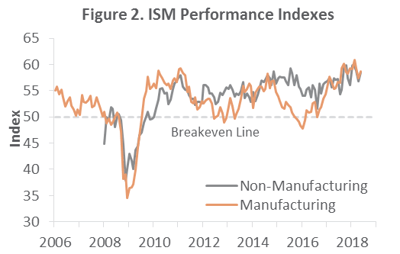 The consumer price index (CPI) increased 0.2 percent in May (+2.8 percent YoY). As in April, the indexes for gasoline (+1.7 percent) and shelter (+0.3 percent) were the largest contributors to the MoM increase in the all-items index. Combined, they more than offset declines in some of the other energy component indexes, and led to a 0.9 percent rise in the energy index. Meanwhile, the medical care index rose 0.2 percent whereas the food index was unchanged.

The producer price index (PPI) rose 0.5 percent in May (+3.1 percent YoY); 60 percent of the rise in the final-demand index was attributable to a 1.0 percent advance in prices for final demand goods (especially a 9.8 percent rise in the gasoline index). The index for final demand services moved up 0.3 percent.

US forest industry
Strategic Planning During Downturns with Precise Market Data
It’s difficult to overstate the uniqueness of the current global health (and economic) crisis we find ourselves in....
END_OF_DOCUMENT_TOKEN_TO_BE_REPLACED