Reflecting annual revisions published at the end of March, total industrial production (IP) edged up by 0.1 percent in February (+0.4 percent YoY). Manufacturing output rose by 0.5 percent (+1.5 percent YoY). Revisions to total IP show lower rates of change in recent years—especially 2014 and 2015. Also, total IP returned to its pre-recession peak in November 2014 instead of the previously reported May 2014.

The Institute for Supply Management’s (ISM) survey showed the expansion in US manufacturing decelerated slightly during March. The PMI registered 57.2 percent, down 0.5 percentage point from February. (50 percent is the breakpoint between contraction and expansion.) Sub-indexes exhibited acceleration in employment, input prices (highest value since May 2011) and export orders. The pace of growth in the non-manufacturing sector retreated more significantly when dropping by 4.7 percentage points, to 58.9 percent. NMI sub-indexes were a mixed bag, with rising export and import orders amid decelerating business activity, new orders and employment. 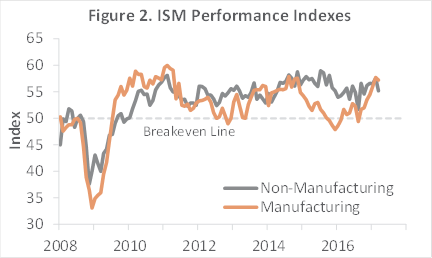 The consumer price index (CPI) increased 0.1 percent in February, the smallest MoM rise since July 2016. The gasoline index declined, partially offsetting increases in several indices, including food, shelter, and recreation. Despite the small MoM increase, the all-items index rose 2.7 percent for the 12 months ending February; the YoY increase has been trending upward since a July 2016 trough of 0.8 percent. The energy index rose 15.2 percent over the last year; rent: +3.9 percent YoY, and medical services: +3.4 percent.

Most of the forest products-related PPIs we track increased in February:

US forest industry
US Labor Market Wraps Up 2019 With a Bang
Every month, Forest2Market publishes updated forecasting products designed specifically for participants in the...
END_OF_DOCUMENT_TOKEN_TO_BE_REPLACED