After annual revisions, published in late March, incorporating data from the US Census Bureau’s 2016 Annual Survey of Manufactures, total industrial production (IP) reportedly increased by 0.9 percent (+4.3 percent YoY) in February. Manufacturing output rose by 1.3 percent (+2.7 percent YoY). Revisions to total IP were minimal through 2014 but modestly negative thereafter. Wood Products revisions were negative in 2015 but positive thereafter; Paper was revised up in 2015 but down thereafter.

Total IP has maintained a modest upward trend since mid-2016, and—having finally exceeded the pre-Great Recession peak only in December 2017—is closing in on the all-time high set back in November 2014. Wood Products output has wound along a sustained upward trajectory since the Great Recession ended, but Paper keeps extending its long-term decline. 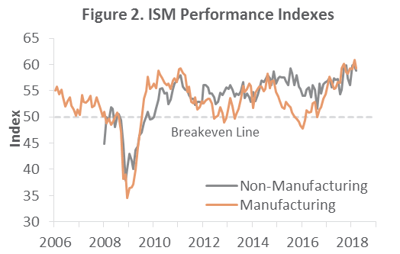 The Institute for Supply Management’s (ISM) monthly sentiment survey showed that the expansion in US manufacturing decelerated slightly in March. The PMI registered 59.3 percent, down 0.5PP from the February reading. All of the sub-indexes were consistent with lessened activity; also, all industries reported paying higher input prices.

The pace of growth in the non-manufacturing sector slowed for a second month (-0.7PP), to 58.8 percent. Sub-indexes with higher values were offset by an equal number of decliners; as with manufacturing, all service industries reported paying higher prices.

The producer price index (PPI) advanced 0.2 percent in February (+2.8 percent YoY). The rise in final demand prices was attributed to a 0.3 percent advance in the index for final demand services (due mainly to a 3.7 percent jump in traveler accommodation services). In contrast, prices for final demand goods edged down 0.1 percent, thanks to a 27.1 percent drop in prices for fresh and dry vegetables.