US Forest Industry Performance: May 2019

Total industrial production (IP) fell 0.5 percent in April, and the rates of change for the six prior months were revised down on net. Output in 1Q is now reported to have declined at an annualized 1.9 percent (originally -0.3 percent). Manufacturing output moved down 0.5 percent (-0.3 percent excluding autos) in April after being unchanged in March. Paper was among the largest gainers (+1.2 percent), with Wood Products trailing (+0.2 percent).

New orders turned lower again (-0.8 percent, but +1.6 percent YoY) in April and shipments dropped by the most in two years, further confirming weakness in manufacturing activity that threatens to undercut the broader economy. Demonstrating that much of said weakness is concentrated in the automotive and airline industries, orders excluding transportation rose by 0.3 percent. Caution on the part of business owners resulted in a 1.0 percent decline in investment spending—typically, equipment intended to boost output.

“Manufacturers have without question borne the brunt of the negative impacts from the imposition of tariffs, the retaliation from China, and the uncertainty regarding the outlook for trade policy,” said Amherst Pierpont Securities’ Stephen Stanley. “Factories have also been hit by the strengthening in the dollar last year.” The IP data suggest “a softer 2Q growth rate that will essentially cancel out the upside surprise we saw in 1Q,” added CIBC Capital Markets’ Avery Shenfeld. 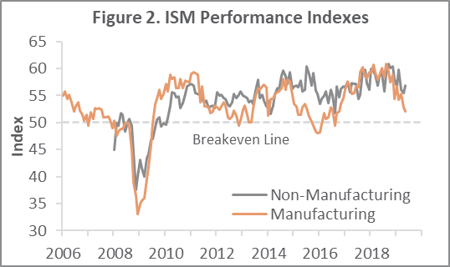 The Institute for Supply Management’s (ISM) May survey showed the expansion in US manufacturing decelerating (-0.7PP) to 52.1 percent. A jump in input prices (+3.2PP) and drop in order backlogs (-6.7PP) were the most noteworthy sub-index changes. Meanwhile, the pace of growth in the non-manufacturing sector accelerated (+1.4PP) to 56.9 percent. The jump in employment (+4.4PP) and drop in imports (-5.0PP) were notable.

IHS Markit’s May survey headlines were much more pessimistic than those of ISM, and “add to worrying signs about the health of the U.S. economy,” wrote Markit’s Chris Williamson. “The [combined] survey data indicate a deterioration of annualized GDP growth to just 1.2 percent in May, down from 1.9 percent in April, putting 2Q on course for a 1.5 percent rise.”

The consumer price index (CPI) increased 0.3 percent in April (+2.0 percent YoY), over two-thirds of which can be attributed to a 5.7 percent advance in the gasoline index. The New York Fed’s Underlying Inflation Gauge estimates annual CPI inflation to be trending in a range between +1.9 percent and +2.8 percent.

US forest industry
CPI & Forest Products Sector PPI Continue to Expand
US forest industry performance in February and March was recently reported by both the US government and the Institute...
END_OF_DOCUMENT_TOKEN_TO_BE_REPLACED