US forest industry performance in October and November was recently reported by both the US government and the Institute for Supply Management.

Total industrial production (IP) edged up 0.1 percent in October (+4.1 percent YoY), as a gain in manufacturing offset decreases elsewhere. As a result of upward revisions primarily in mining, the overall index advanced in 3Q at an annualized 4.7 percent instead of the previously reported 3.3 percent. Hurricanes in both September and October pared total IP by less than 0.1 percent per month.

In spite of a sizable drop in motor vehicle assemblies in October, manufacturing output rose 0.3 percent for its fifth consecutive monthly increase; manufacturing production excluding motor vehicles and parts increased 0.5 percent. The indexes for mining and utilities declined 0.3 percent and 0.5 percent, respectively. For a longer-term perspective, manufacturing IP has risen by an average 0.2PP per month since the start of 2016, but is still about 2.5PP below its pre-Great Recession peak.

The Institute for Supply Management’s (ISM) monthly sentiment survey showed that the expansion in US manufacturing during November regained some of the ground lost in October. The PMI registered 59.3 percent, up 1.6PP. The pace of growth in the non-manufacturing sector also ticked higher (+0.4PP) to 60.7 percent. Interestingly, input price growth eased for manufacturers but accelerated in the service sector.

Of the industries we track, only Wood Products and Ag & Forestry did not expand. “Commercial construction is strong,” commented a Construction respondent. “Employment is struggling due to lack of qualified talent.” 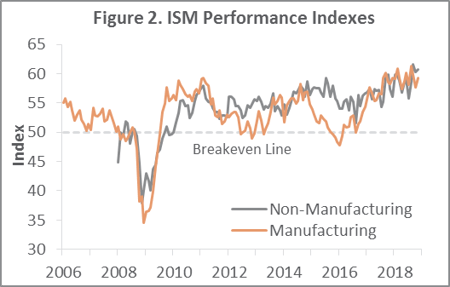 The consumer price index (CPI) increased 0.3 percent (+2.5 percent YoY) in October, one-third of which was attributable to a 3.0 percent MoM jump in the gasoline index; advances in the indexes for shelter (0.2 percent), used cars and trucks (2.6 percent), and electricity (2.3 percent) also contributed. The index for all items less food and energy rose 0.2 percent (+2.1 percent YoY).

The producer price index (PPI) rose 0.6 percent (+2.9 percent YoY); over 60 percent of the MoM rise can be traced to a 0.7 percent advance in the index for final demand services—especially a 1.2 percent increase in the cost of machinery, equipment, parts, and supplies wholesaling. Prices for final demand goods moved up 0.6 percent, thanks primarily to a 7.6 percent jump in the gasoline index.

US forest industry
US Manufacturing, Forest Industry Slam on Brakes in April
US forest industry performance in March and April was recently reported by both the US government and the Institute...
END_OF_DOCUMENT_TOKEN_TO_BE_REPLACED