Total industrial production (IP) rose 0.6 percent (+0.4 percent YoY) in August after declining 0.1 percent in July; it was the largest MoM gain in a year. Utilities and mining moved up 0.6 percent and 1.4 percent, respectively, while manufacturing production increased 0.5 percent (-0.4 percent YoY)—more than reversing July’s -0.4 percent. Factory output has increased 0.2 percent per month since May after having decreased 0.5 percent per month between January and April.

Wood products’ +0.7 percent jump in output during August reflected increases in both capacity (+0.3 percent) and capacity utilization (+0.4 percent); i.e., wood products’ footprint is expanding and the sector was running harder in August. The opposite is true for paper products: Its -0.7 percent drop in output results from both shrinking capacity (within -0.1 percent MoM) and a falloff in the utilization of that capacity (-0.7 percent). 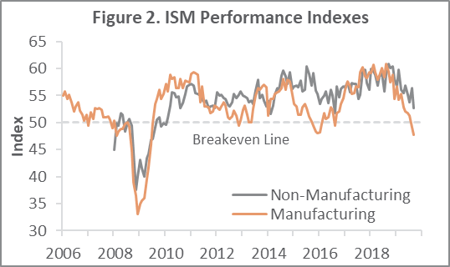 The Institute for Supply Management’s September survey showed U.S. manufacturing contracting further. The PMI registered 47.8 percent, down 1.3PP from the August reading. Notable declines occurred in the indexes for inventories, exports and production; indexes rose for input prices and imports but remained below breakeven.

The pace of growth in the non-manufacturing sector decelerated (-3.8PP) to 52.6 percent—its lowest reading since August 2016. Drivers behind the drop were widespread, but offset to some extent by increases in the order backlog and exports indexes.

Of the industries we track, only Construction and Ag & Forestry expanded. “We are very busy right now [and] expect to be so for the next 12 months,” commented one Construction respondent. “We are still very shorthanded with qualified labor.” Findings of IHS Markit’s September surveys were mixed relative to their ISM counterparts, but the overall conclusions were the same—conditions in both manufacturing and services are tepid at best.

The consumer price index (CPI) rose 0.1 percent in August (+1.7 percent YoY) as increases in the indexes for shelter (+0.2 percent) and medical care (+0.9 percent) outweighed a 1.9 percent decline in the energy index (mainly gasoline: -3.5 percent). Meanwhile, the producer price index (PPI) edged up by 0.1 percent in August (+1.8 percent YoY). In August, the advance in final demand prices was primarily attributable to a 6.4 percent jump in the cost of operating motels and other guest accommodations. In contrast, prices for final demand goods fell 0.5 percent (especially gasoline’s -6.6 percent).

US forest industry
US Labor Market Wraps Up 2019 With a Bang
Every month, Forest2Market publishes updated forecasting products designed specifically for participants in the...
END_OF_DOCUMENT_TOKEN_TO_BE_REPLACED