Just hours before congress approved sweeping new tax legislation on December 19, the Commerce Department released US housing starts data for November that added to the newfound sense of economic optimism that continues to drive the Down Jones Industrial Average (DJIA) into record territory. The Index recently flirted with the 25,000 mark—an utterly inconceivable number just a year ago. Single-family homebuilding and permits surged to more than 10-year highs in November.

After soaring nearly 14 percent in October, US housing starts jumped 3.3 percent to a seasonally adjusted annual rate (SAAR) of 1,297,000 units in November. Single-family starts accounted for 930,000 units, which is 5.3 percent above the revised October figure of 883,000. Starts for the volatile multi-family housing segment dropped 1.6 percent to a rate of 367,000 units after surging to nearly 37 percent in October.

Privately-owned housing completions decreased to a SAAR of 1.116 million in November, down 6.1 percent from October’s revised estimate of 1.189 million and 7.2 percent below November 2016. Regional performance in November was mixed, as confirmed by the US Census Bureau report. Seasonally-adjusted total housing starts by region included:

The 30-year fixed mortgage rate increased from 3.90 to 3.92 percent in October. The National Association of Home Builders (NAHB)/Wells Fargo builder sentiment index increased by 5 points to 74 in early December, marking the third consecutive increase. “Builder confidence has not been this high for 18 years, which is a sure sign that homebuilding will ramp up if builders can secure the lots and workers they need,” said analysts at Wells Fargo.

Lawrence Yun, chief economist for the National Association of Realtors, said “A welcoming trend is developing in the housing sector as builders are able to bring more supply to the market on a consistent basis. The latest monthly figure of near 1.3 million annualized housing starts is solid, and the growth is mostly coming both in the West and for single-family homes.”

Yun continued, "There is still more room for improvement, as the latest figure is still not yet at the long-term 50-year average of producing 1.5 million units per year. If this rising trend continues, the worst of the supply shortage could soon end, which would help slow price appreciation in 2018. That would be a huge, welcoming relief for renters seeking to become homeowners.”

Lumber consumption in the US has remained strong and steady throughout most of 2017—a sign that the housing market is healthy enough to create sustainable demand. While US lumber production has increased roughly 3 percent year-over-year (YoY), the only region in North America that has experienced a decrease in lumber production in 2017 is British Columbia, which is primarily due to destructive summer wildfires and a surplus of dead and rotting timber in the forest.

As lumber markets have strengthened, the growth in demand in the Pacific Northwest (PNW) has shifted entirely to available timber from private forest lands, which are already nearing sustainable long-term harvest levels. This is a boon for landowners and loggers, as mill buyers struggle to capture the measure of supply demanded by their facilities. This situation will likely continue well into 2018, and at least as long as lumber prices hold at current levels. 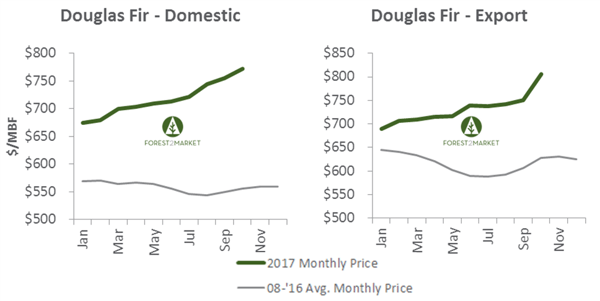 As a result of these factors, Doug fir log prices are at much higher sustained levels than they have been at any time in recent years; in October, the weighted average price for delivered domestic logs was $772/MBF. 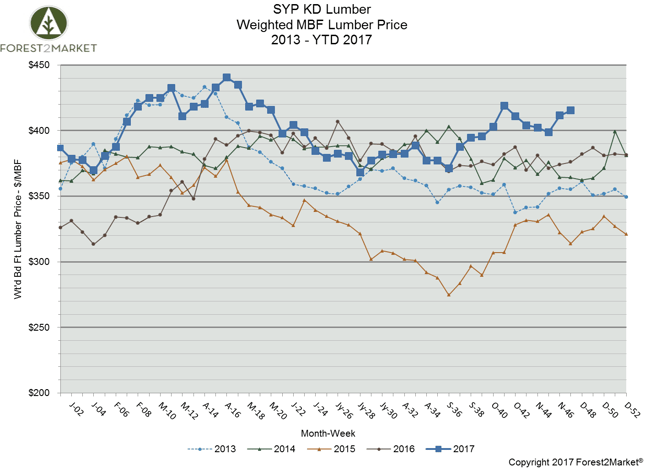 Per Madison’s Lumber Reporter, “Expectations are that most wood commodity prices will remain generally level until more volatility hits the market right at the beginning of 2018. Anecdotal comments from suppliers indicate the duties [recently-instated tariffs on Canadian softwood lumber imports into the US] have already been absorbed into prices and the US International Trade Commission’s announcement has had no impact on price levels.”

Housing Market
May Housing Starts Plummet and Softwood Lumber Prices Follow
US homebuilding plummeted to a 13-month low in May, and prices for finished softwood lumber followed suit as the...
END_OF_DOCUMENT_TOKEN_TO_BE_REPLACED

Housing Market
January Housing Starts Falter as High Prices Stress Market
US housing starts dropped more than expected in January as many parts of the country were exposed to prolonged cold...
END_OF_DOCUMENT_TOKEN_TO_BE_REPLACED