Despite tremendous headwinds in 2020, US housing starts rose for the fourth month in a row in December to their best pace since late 2006. How has the new housing sector managed to defy the odds during a year that was anything but “normal”?

Zillow’s Matthew Speakman summed it up fittingly, noting that “2020 will go down, quite unexpectedly, as one of the best years for home builders in recent memory and proof that great challenges — and not just those posed by COVID — can be overcome with hard work and creativity. Demand for homes remains sky high, despite the still-raging pandemic, as people look to take advantage of historically low mortgage rates and find their next home.” 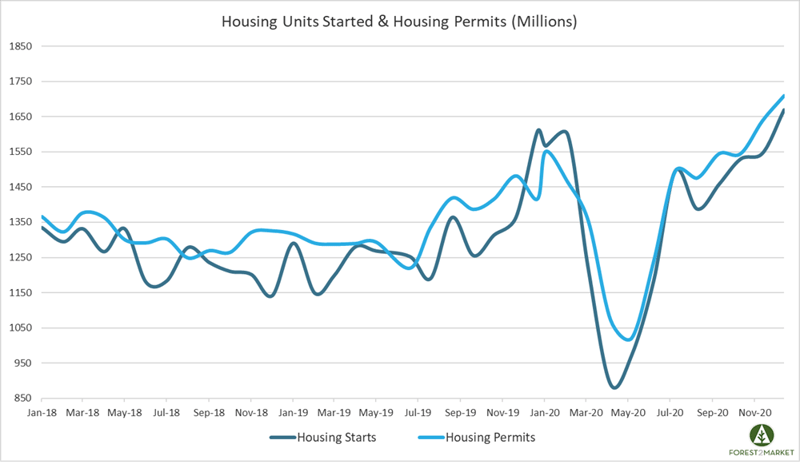 The 30-year fixed mortgage rate dipped in December from 2.77 to 2.68, the lowest level on record, although speculation is that rates are likely to turn higher with the administration change in Washington. The NAHB/Wells Fargo Housing Market Index (HMI) fell by three points to 83 in mid-January.

Per housing market insights published in our most recent issue of the Economic Outlook, the shortage of existing homes for sale (evidenced by inventory shrinking to 2.3 months at November’s sales rate) means “new home construction stands out as a clear solution to the rising challenge of affordability especially as housing demand is expected to continue to grow,” said Realtor.com’s George Ratiu. “However, without a significant supply of new construction, many would-be buyers will be forced to sit on the sideline due to record-high home prices.”

Supporting Ratiu’s contention, Attom Data Solutions found homeownership was less affordable than the historical average across 55 percent of the 499 counties it analyzed, up from 33 percent three years ago.

Housing market conditions are extraordinary at present. Reversion toward historical norms is inevitable (e.g., when mortgage rates rebound off of their current low), but the real question is how imminent that reversion may be. The end of forbearance programs and eviction moratoria may ultimately prove to be the catalysts setting that reversion in motion.

Requests for acceptance into those programs were previously scheduled to end on December 31, but have been extended again to either February 28 (homeowners) or March 31, 2021 (multi-family mortgage holders). It is difficult to argue against such programs, given the plight in which millions find themselves, but there is no denying forbearance and eviction moratoria constitute examples of the proverbial “kicking the can down the road”—and the can keeps getting bigger and heavier with each extension. In addition, this is not a victimless effect, as unpaid mortgage holders are experiencing financial hardships.

Zillow’s Speakman concluded: “But just as demand for housing remains red hot, supply-side constraints that have hindered homebuilders for years have recently become even more acute. A shortage of available land and labor and exceptionally volatile materials’ prices, which skyrocketed in recent weeks, have combined to hold building activity in check and made it difficult for builders to truly operate at their full capacity and keep up with demand. But even though they may be slightly hobbled, builders are operating smartly — focusing more on single-family building projects to meet demand, rather than longer-term, more-complicated multifamily development — and keeping the permit pipeline full, guaranteeing more strong months to come in 2021.”

Housing Market
Lower Housing Starts, Higher Home Prices, and Surging Inflation
After a disappointing May (-14%), US home building continued to inch down in June as the housing market cools amid...
END_OF_DOCUMENT_TOKEN_TO_BE_REPLACED

Housing Market
May Housing Starts Plummet and Softwood Lumber Prices Follow
US homebuilding plummeted to a 13-month low in May, and prices for finished softwood lumber followed suit as the...
END_OF_DOCUMENT_TOKEN_TO_BE_REPLACED