US housing starts inched up in October thanks to a jump in multi-family homebuilding. However, construction of single-family homes continued to disappoint and fell for the second straight month, suggesting that the housing market is weaker than expected as mortgage rates continue to climb higher.

After dropping 5.3 percent in September, US housing starts inched up 1.5 percent to a seasonally adjusted annual rate (SAAR) of 1,228,000 units in October. Single-family starts accounted for 865,000 units, which is 1.8 percent below the revised September figure of 881,000, and starts for the volatile multi-family housing segment jumped 10.3 percent to a rate of 363,000 units in October. Multi-family numbers were off over 15 percent last month, so a bounce back is not unexpected.

Privately-owned housing authorizations were also down 0.6 percent to a rate of 1,263,000 units in October. Single-family authorizations decreased to 849,000, which is 0.6 percent below the revised September figure. Privately-owned housing completions were down 3.3 percent to a SAAR of 1,111,000 units in October. Regional performance demonstrated some drastic variation as confirmed by the US Census Bureau report. Seasonally-adjusted total housing starts by region included:

“Single-family starts were strong at the beginning of the year, but weakened this summer and have remained soft,” said NAHB chief economist Robert Dietz. “Despite this softness, 2018 construction volume is set to be the best since the downturn. A growing economy and positive demographic tailwinds are supporting housing demand as interest rates rise.”

The 30-year fixed mortgage rate is now hovering at a seven-year high of 4.94 percent as of late November. At the same time, builder sentiment recorded its sharpest one-month drop in over 4.5 years as the National Association of Home Builders (NAHB)/Wells Fargo builder sentiment index fell to 60—an 8-point drop in one month and the lowest level since 59 that was recorded in August 2016.

The sputtering housing market—whose slow growth helped to buoy the larger US economy over the last decade—now stands in stark contrast with the broader economy, which has seen two straight quarters of robust growth and an unemployment rate at a near 50-year low of 3.7 percent. The Bureau of Economic Analysis (BEA) pegged growth of the US economy at a seasonally adjusted and annualized rate (SAAR) of +3.50 percent in 3Q2018, right on the heels of 2Q2018’s +4.15 percent. However, prolonged softness in the housing market coupled with an unrelenting sell-off in stocks is beginning to inspire doubt about the durability of the current economy.

Among the drivers of this softening is the restrained amount of new-home building since the Great Recession of 2008. Single-family housing starts have been well below the 1984-2004 median level for nearly a decade, which has kept inventories at sustained low levels—particularly at the lower end of the housing market. 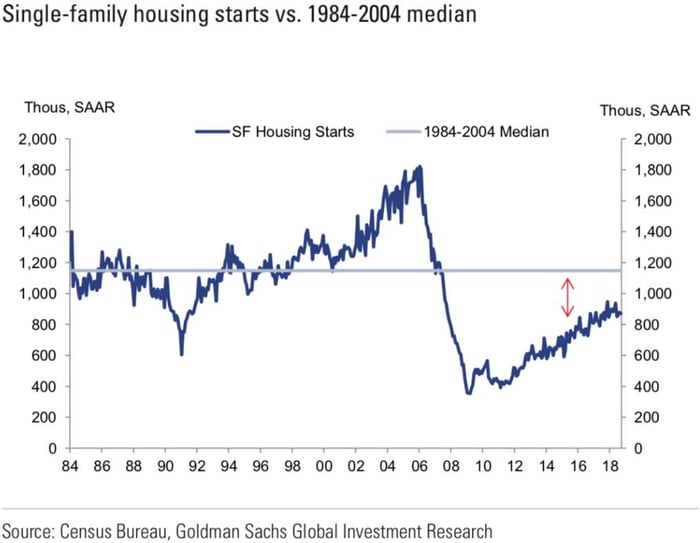 Despite the severe drop in builder sentiment and lackluster housing start numbers, Ian Shepherdson, chief economist at Pantheon Macroeconomics, believes that Hurricanes Florence and Michael temporarily drove this sentiment lower, and a December rebound is possible. “Indeed, once the hurricane distortions fade from the new home sales numbers, we expect to see a clear rebound for the next few months, before the underlying softening trend re-emerges. The housing market is softening, but it is not melting down, and these data likely overdo the gloom,” said Shepherdson.

Housing Market
US Housing Starts Reach13-year High in December
Talk about a well-timed (if late) Christmas gift for the US economy. Housing starts skyrocketed to a 13-year high in...
END_OF_DOCUMENT_TOKEN_TO_BE_REPLACED

Housing Market
November Housing Starts Jump for Second Month in a Row
The housing market is (slowly) gaining momentum, which is largely being driven by robust economic data in...
END_OF_DOCUMENT_TOKEN_TO_BE_REPLACED