US Housing Starts Spring to Life in April

Providing a much-needed spark to the sputtering housing market, US housing starts jumped significantly in April as gains were reported in both single- and multi-family housing units. Additionally, housing starts data for March was revised up to a pace of 1.168 million units as opposed to the slight 0.3 percent decrease as previously reported.

Reversing course after the previous two months, privately-owned housing authorizations were up 0.6 percent to a rate of 1.296 million units in April. Single-family authorizations were down 4.2 percent at a pace of 782,000 units. Privately-owned housing completions were down 1.4 percent to a SAAR of 1.312 million units. Per the US Census Bureau Report, seasonally-adjusted total housing starts by region included: 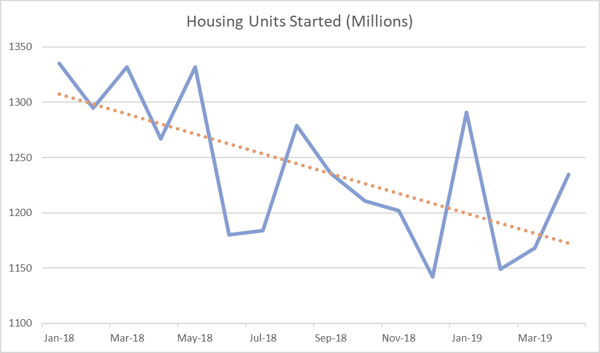 The 30-year fixed mortgage rate continued to decline in April, dropping to 4.14 percent for the month, which is 7.4 percent lower than a year ago. The rate has now dropped 15 percent since peaking at 4.87 in November 2018.

Bloomberg economists Yelena Shulyatyeva and Carl Riccadonna noted that, “A stronger-than-expected increase in housing starts at the beginning of the second quarter bodes well for residential investment to make a contribution to GDP growth after five quarters of declines. Housing is one of the few sectors benefiting from current market jitters and flight to quality in bonds as lower interest rates improve affordability.”

“Builders remain cautious due to affordability concerns,” said Greg Ugalde, chairman of the National Association of Home Builders (NAHB). “But as our builder confidence survey shows, their expectations indicate consumers will respond to lower interest rates moving forward and the housing market will continue on a slow, steady climb.”

Housing Market
April Housing Starts Plunge 30%; Is the Bottom Within Sight?
After tumbling over 18 percent in March, US housing starts plummeted another 30 percent in April to the lowest level...
END_OF_DOCUMENT_TOKEN_TO_BE_REPLACED

Supply chain
Australia: Demand for New Housing & Lumber Collapses
In March 2020, before the COVID-19 pandemic gripped the global economy, there were 15,386 new dwellings approved in...
END_OF_DOCUMENT_TOKEN_TO_BE_REPLACED

Housing Market
March Housing Starts Freefall in Wake of Pandemic
Not surprisingly, US homebuilding dropped sharply in March as the COVID-19 pandemic continues to wreak havoc on...
END_OF_DOCUMENT_TOKEN_TO_BE_REPLACED