Despite the lingering effects of Hurricanes Harvey and Irma in some areas—particularly in hardest-hit Puerto Rico—US homebuilding surged to a one-year high in October as communities throughout the US South began replacing houses damaged during the storms. Indeed, the region “carried” the metric through October; housing starts in the US South soared over 17 percent to 621,000 units, with single-family construction jumping more than 16 percent to its highest level since 2007.

US housing starts soared 13.7 percent to a seasonally adjusted annual rate (SAAR) of 1,290,000 units in October. Single-family starts accounted for 877,000 units, which is 5.3 percent above the revised September figure of 833,000. Starts for the volatile multi-family housing segment surged nearly 37 percent to a rate of 413,000 units.

Privately-owned housing completions increased to a SAAR of 1.23 million in October, up 12.6 percent from September’s revised estimate of 1.09 million and 15.5 percent over October 2016. Single-family completions also increased in October, posting a 2.6 percent rise from September’s rate of 773,000 to 793,000. Regional performance in October was largely positive, as confirmed by the US Census Bureau report. Seasonally-adjusted total housing starts by region included:

“The pace of building came back stronger than before the storms hit, which suggests the increase from recovery may have already started in fourth quarter,” said Mark Vitner, a senior economist at Wells Fargo Securities

Sales of new single-family homes jumped 19 percent in September (compared to August), which was also 17 percent higher year-over-year. However, existing-home sales rose by just 0.7 percent in September after three straight months of declines despite strong demand, according to the National Association of Realtors (NAR).

“Home sales in recent months remain at their lowest level of the year and are unable to break through, despite considerable buyer interest in most parts of the country,” says Lawrence Yun, NAR chief economist. “Realtors this fall continue to say the primary impediments stifling sales growth are the same as they have been all year: not enough listings—especially at the lower end of the market—and fast-rising prices that are straining the budgets of prospective buyers.”

A new report from CoreLogic, a leading global property information, analytics and data-enabled solutions provider, shows that home prices are up significantly this year; prices nationally increased year-over-year by 7 percent and month-over-month by 0.9 percent in September.

CoreLogic also forecasts that home prices will increase by 4.7 percent on a year-over-year basis from September 2017 to September 2018, which will further tighten the market. “Heading into the fall, home price growth continues to grow at a brisk pace,” said Dr. Frank Nothaft, chief economist for CoreLogic. “This appreciation reflects the low for-sale inventory that is holding back sales and pushing up prices.”

“A strengthening economy, healthy consumer balance sheets and low mortgage interest rates are supporting the continued strong demand for residential real estate,” said Frank Martell, president and CEO of CoreLogic. “While demand and home price growth is in a sweet spot, a third of metropolitan markets are overvalued and this will become more of an issue if prices continue to rise next year as we anticipate.“

If prices continue to rise as predicted, the housing market could face some additional challenges in the form of a proposed tax plan currently making its way through congress. While the highest end of the market would be hardest hit (as the bill stands now), a number of key residential markets could also be affected, which would certainly compound the woes for homeowners in some of the overvalued markets noted above.

A recent article in the New York Times notes that, “According to some economists, real estate agents have plenty to fear. The Senate version of the tax bill would eliminate the deduction for local property taxes (the House bill caps it at $10,000), and both the House and Senate bills would effectively make the mortgage-interest deduction less valuable to many homeowners. Both provisions could raise the cost of owning a home, making homeownership less attractive for at least some families—and perhaps depressing property values.” 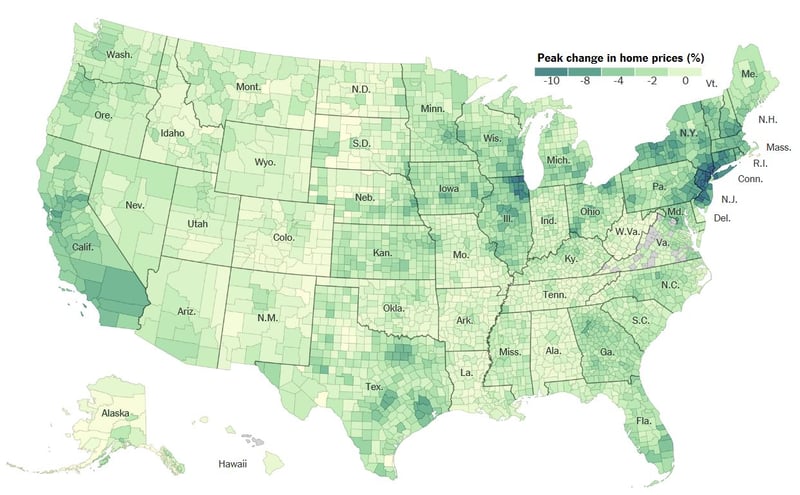 Note: Figures represent the effect of the Senate tax bill on the price of a typical home at the time of maximum impact, usually mid-2019. Source: Moody’s Analytics

Per an analysis by Moody’s Analytics, the most expensive markets could see significant declines in home values under the proposed tax plan. “In New York and New Jersey, which have expensive homes and high property taxes, home values could fall as much as 14 percent by 2019 under the Senate plan, according to the Moody’s analysis. The suburbs around Chicago, Cleveland and Philadelphia are also near the top of the list.”

That said, the plan is still undergoing analysis and is not yet law. “Still, they reflect a fundamental truth: The tax code subsidizes homeownership, and that has raised the value of homes. All else being equal, removing those tax breaks should reduce home prices.”

As the holidays approach, buyer demand will likely wane and sellers will remain more aggressive with price reductions through the winter months despite the proposed tax plan. However, the tightening of inventory and new data from CoreLogic appear to indicate that home prices may be prohibitively high for years to come.

Housing Market
Lower Housing Starts, Higher Home Prices, and Surging Inflation
After a disappointing May (-14%), US home building continued to inch down in June as the housing market cools amid...
END_OF_DOCUMENT_TOKEN_TO_BE_REPLACED

Housing Market
May Housing Starts Plummet and Softwood Lumber Prices Follow
US homebuilding plummeted to a 13-month low in May, and prices for finished softwood lumber followed suit as the...
END_OF_DOCUMENT_TOKEN_TO_BE_REPLACED