As biopower markets in Asia mature, the increased competition for wood pellets and chips will provide opportunities for suppliers of these materials around the globe. Because biomass pellets can be made with low-cost wood raw materials and the cost of shipping is low, the number of potential suppliers is significant. Asian biopower producers, particularly those in Japan and South Korea, will require a secure and consistent supply of biomass feedstock (both pellets and chips), sometimes from multiple suppliers in multiple geographies. As a result, they will require strong procurement strategies, supply chain risk assessments, cost analyses, supplier diligence processes and contract negotiation strategies.

This post is the second in a series that will examine specific regions around the globe that are potential suppliers to Asian markets. Read the first, about potential biomasss feedstock supply coming from the US South.

Historically, the US Northwest (northern California, Idaho, Oregon, Washington, and western Montana) has been a strong timber production region. Conifer sawmills are the dominant industry in the area along with multiple engineered wood product mills (veneer, plywood, and composite panels), as well as 15 active pulp and paper mills. But pulp and paper does not have a complete lock on the wood chip supply, as there are also a few biomass pellet facilities and other specialty mills that source chips in this region (Fig. 1). 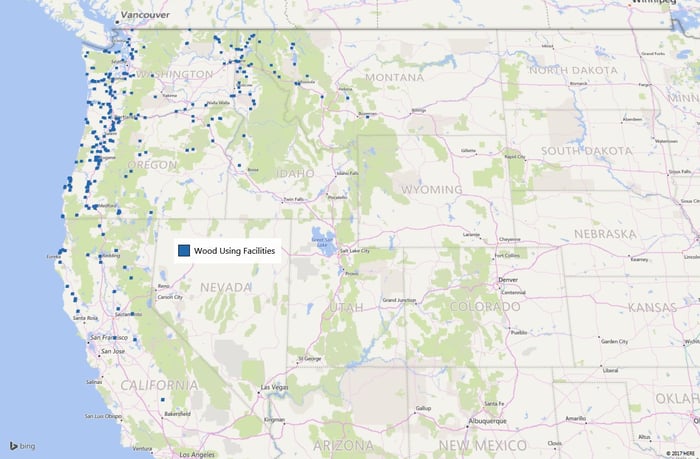 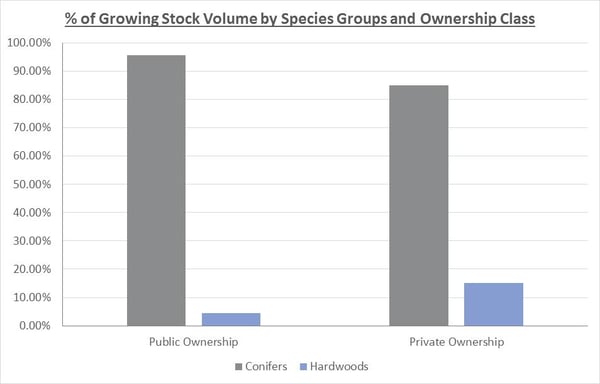 Regional timber harvest is heavily weighted toward larger sawtimber-sized material (12” DBH and higher). A majority of the pulp mill supply (roughly 71 percent) comes from sawmill residual chips, while the remainder is comprised of whole-tree chips from off-site chip mills. Fiber supply for all pulp mills in the Northwest is predominately conifer, with only a few sites using hardwood as a small percentage of their total consumption. 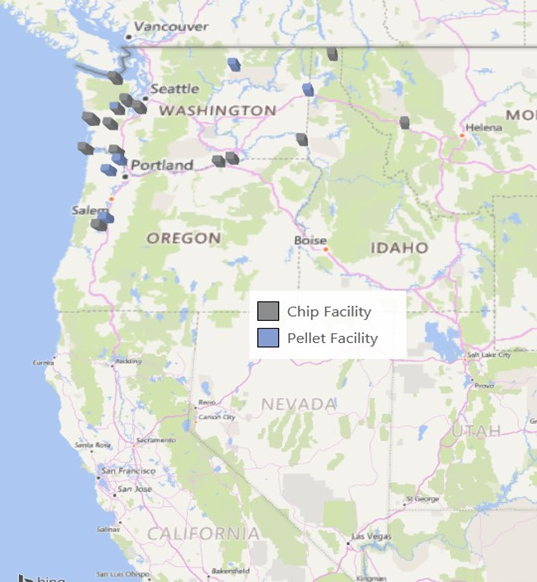 One notable difference between the US South and the Northwest is the seasonal (but frequent) occurrence of severe, large-scale wildfires. This is related to a combination of climatic conditions in the PNW, ownership/management intensity and harvest restrictions, all of which have allowed for the build-up of excessive fuel loads in many forest stands. One method proven to be effective in reducing wildfire loss is through the use of fuel-reduction thinning operations, especially on public lands.

Due to this lack of forest management, one analysis estimated that up to 12 million green tons of biomass could be harvested via fuel-reduction thinning over the course of a decade. If this management practice is promoted and implemented, the increase in small log and residual material availability could spur a growth in both wood chip and pellet production.

With forestland ownership being primarily public (federal, state and municipal), the fiber supply chain in the US Northwest is somewhat different than in other regions. Public land management is governed by different sets of rules and procedures, and harvesting is conducted at a reduced level compared to private land.

A large portion of private forestland is owned by timber investment management organizations (TIMOs), real estate investment trusts (REITs), and other large landownerships that supply a majority of the timber in the region. Because of the TIMO/REIT influence in the region, tract sizes are generally much larger and small tracts (under 20 acres) are less prevalent than in other regions. There are small-scale landowners as well, but they comprise a much smaller piece of the available volume.

As a result of this fragmented ownership situation, there is not a robust timber dealer/broker network. Large landowners generally negotiate delivered contracts directly with the mills, and they then pay loggers for harvesting services and transportation from the woods to the mill. While there are some stumpage sale contracts in the region, it is not a common practice as it is in the US South.

While the US South maintains the lowest delivered costs in the country due to its supply and infrastructure, the Northwest is mid-range due to its geographic proximity to ports and steady supply of conifer products. 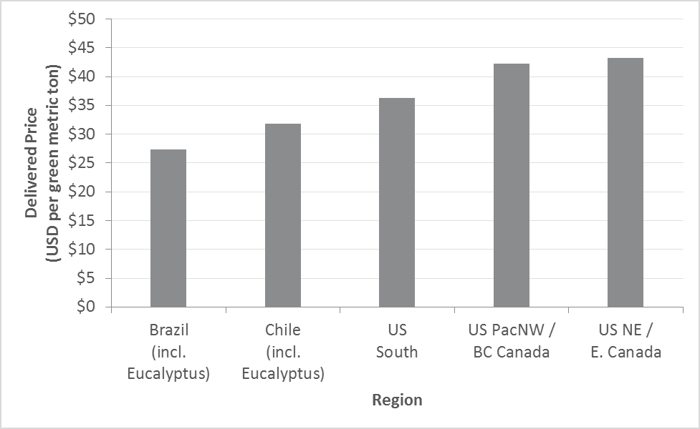 As noted in the first post in this series that covers the US South, wood chips appear to be a lower-cost product but pellets have the advantage in long-distance transport due to weight and conversion. Pellets also don’t need fumigation, which makes them a cost effective product for export.

The following table is based upon typical raw material delivered costs to pellet and chip facilities ranging from $38 - $48 per green metric ton ($73 - $92 per dry metric ton) in the coastal Northwest. While these raw material costs are higher than those in the US South, the overseas transportation distance is cut roughly in half. Given these large cost drivers—along with other smaller cost variations—the US Northwest is advantaged for exporting both pellets and chips to Asia.

As we also noted in the first post, raw material costs make up a high percentage of the total delivered price of both wood pellets and chips originating in the US South. The analysis for the Northwest confirms the same cost component structure, but it also highlights the importance of the location of the wood source, as the associated transportation costs can have a significant impact on the final delivered price. 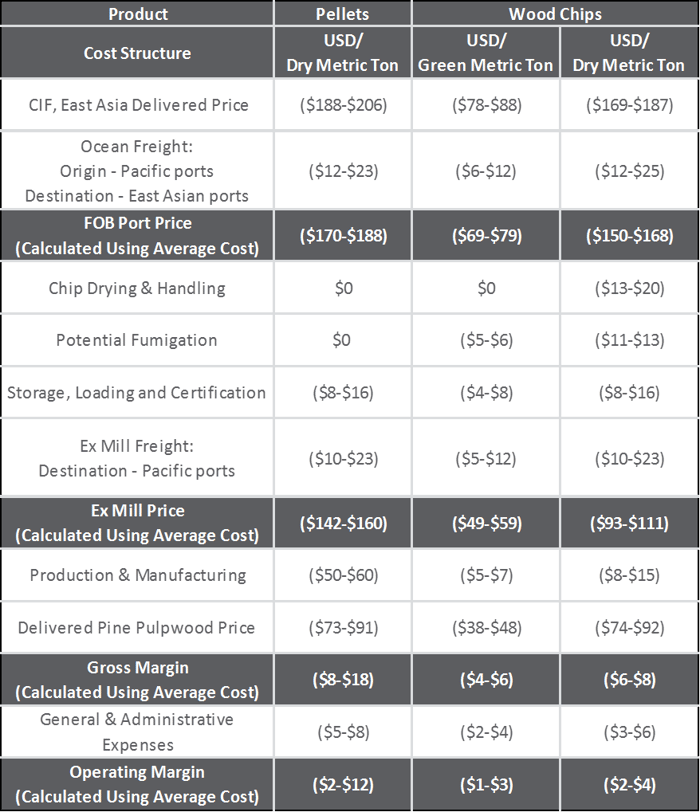