The first half of 2016 is now in the books. As we approach the latter half of the summer, it’s a good time to examine how stumpage prices across the US South have performed over the last six months and project how 2H2016 will develop. Pine stumpage prices across the South gained ground during the 1H2016 time period when compared to 2H2015 numbers, while hardwood prices slid. Pine pulpwood and pine chip-n-saw saw prices increased 2.0 percent and 2.6 percent, respectively, while pine sawtimber surged +4.3 percent to $27.03/ton during the first half of this year. Hardwood pulpwood fell, but only slightly (>1 percent) during this six-month period, while hardwood sawtimber tumbled -3.8 percent to $20.75/ton.

Pine chip-n-saw prices gained 2.6 percent during 1H2016, from $17.58/ton up to $18.05/ton. Generally speaking, chip-n-saw has followed pulpwood in that prices have increased compared to 2H2016, but when compared to YoY prices, CNS has dropped modestly (<1 percent). 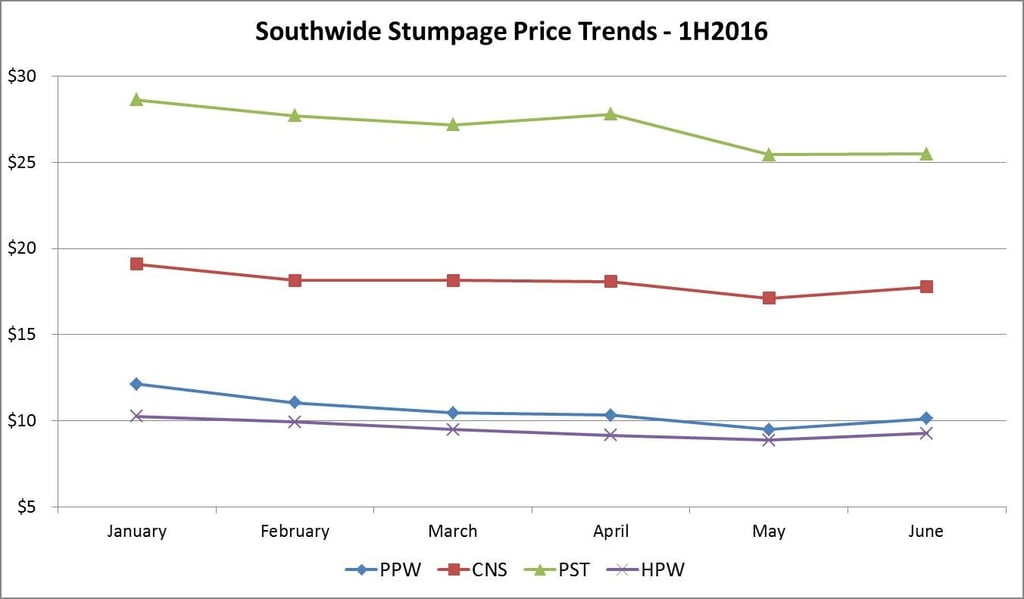 As the US South settles in for a few more months of excessive heat and dry summer conditions, expect prices to continue to be depressed through the early portion of 2H2016, as timber supply is plentiful due to good logging conditions. We expect pine pulpwood to begin its seasonal climb during late fall and early winter months as mills focus on maintaining adequate inventory levels. Pine sawtimber will remain strong in the near term before giving way to a slowing housing market, reflecting typical seasonality for the fall and winter months, but also due to larger macroeconomic issues.

Timber Prices
Stumpage Sales Slump: Will History Repeat Itself?
As any professional forester will attest, we quickly learn the truth of an old business adage while working in the...
END_OF_DOCUMENT_TOKEN_TO_BE_REPLACED