US South Timber Prices (Except Sawtimber) Rise in 3Q2017

US South timber prices during the third quarter of 2017 increased from the second quarter, with nearly all pulpwood and pine log products going up by more than +2 percent. 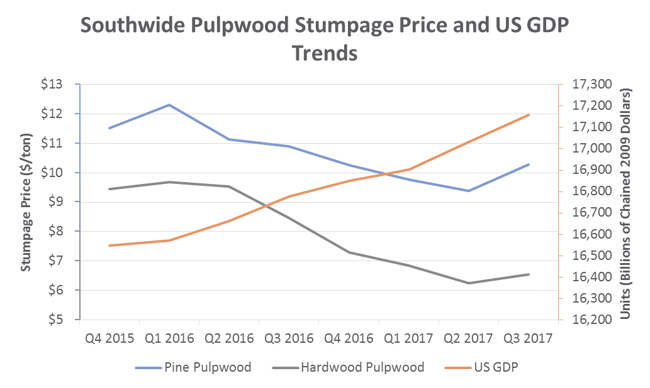 Pine sawtimber, however, continued its slow downward trend, declining -1.0 percent to a Southwide average of $24.43/ton, with all regions demonstrating a minor drop in price. Mid-South pine sawtimber prices slid -3.8 percent to $22.84/ton, and East-South prices dipped -0.7 percent to $25.28/ton. Prices in the West-South dropped -0.3 percent to $25.59/ton. 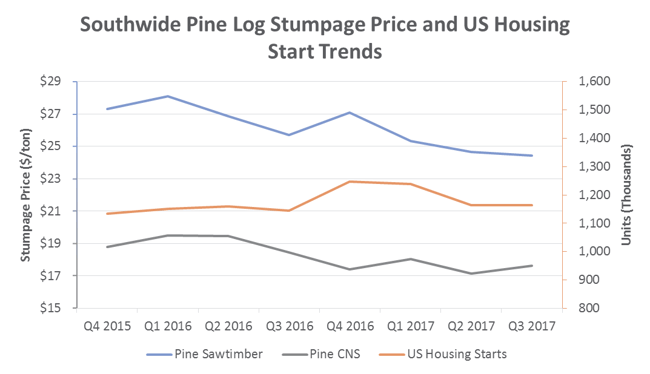 US GDP continues to increase from quarter to quarter and will likely continue to rise in the near term. The Atlanta Federal Reserve recently projected that the US economy expanded at an annual rate of 2.9 percent in 3Q2017. Continued growth at this pace could affect demand for pulp and sawtimber in the coming months. Damage from Hurricanes Harvey and Irma in the South is also adding to demand as rebuilding efforts continue. While demand for pine sawtimber is steady as 2017 draws to a close, there continues to be an oversupply of large logs available on the market.

Timber Prices
Where are Southern Timber Prices Headed?
The modern forest supply chain is without guidance for operating in the current pandemic-driven economic...
END_OF_DOCUMENT_TOKEN_TO_BE_REPLACED