As biopower markets in Asia mature, the increased competition for wood pellets and chips will provide opportunities for suppliers of these materials around the globe. Because biomass pellets can be made with low-cost wood raw materials and the cost of shipping is low, the number of potential suppliers is significant. Biopower producers in Japan, South Korea and other emerging Asian markets will require a secure and consistent supply of both pellets and chips, sometimes from multiple suppliers in multiple geographies. As a result, they will require strong procurement strategies, supply chain risk assessments, cost analyses, supplier diligence processes and contract negotiation strategies.

This is the sixth installment of our series on global supply regions that currently, or could in the future, supply Asian biopower markets. Part 1 focuses on the US South, Part 2 covers the US Pacific Northwest, Part 3 covers British Columbia, Part 4 covers Brazil and Part 5 covers Chile.

Vietnam has been the primary source for wood chip imports to Japan and South Korea over the last three years. During this same time period, Vietnam has also been the main exporter of wood pellets to South Korea, and the second largest pellet exporter to Japan. In 2016, Vietnam supplied 73 percent of wood pellet imports to South Korea and, while the reliability, quality and sustainability of some of the product has raised questions, the lower cost of these pellets has taken precedence over quality.

Vietnam is divided into 58 provinces and five centrally-controlled municipalities. These 62 regions are often grouped into six distinct regions: 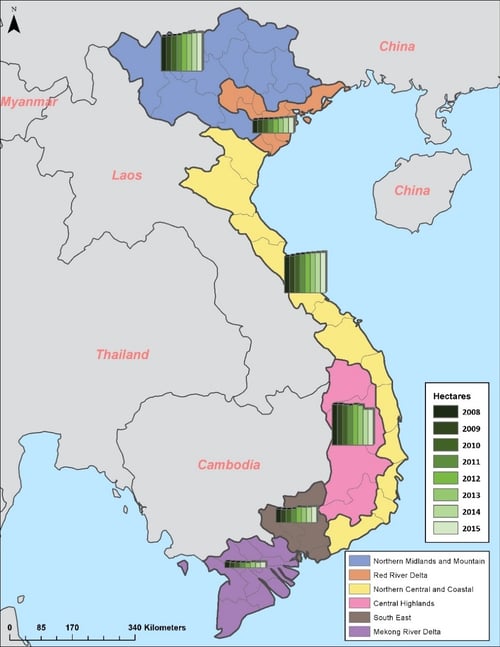 Vietnamese forest land has traditionally been under the management and utilization of state-owned entities, including State Forest Enterprises, the Special Use Forest Management Board, the Protection Forest Management Board and other cooperatives. However, ownership has recently shifted towards households, individuals, village communities and the private sector, and these entities are increasingly expanding their allocation of forest land. Now, the majority (68 percent) of Vietnamese forest land is publicly-owned on a national and sub-national government scale; private landowners hold 25 percent; 7 percent is held by unclassified entities (Figure 2). 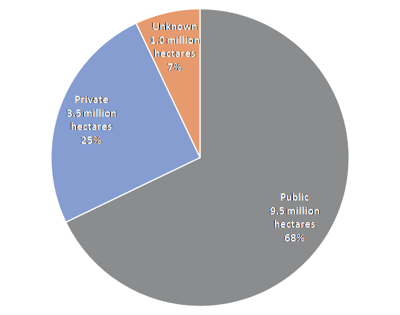 Broad-leafed tree species make up the bulk of Vietnam’s forest inventory with 813 million m3 (approximately 97 percent of the total forest inventory). The Northern Central/Coastal and Midlands/Mountain regions have facilitated the total growing stock inventory to increase 1 percent since 2008 (Figure 3). 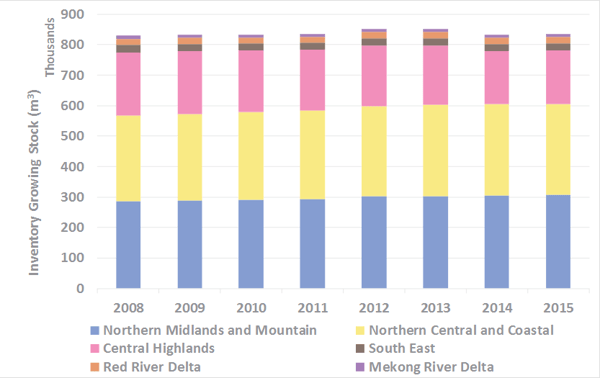 Vietnam is highly dependent on imported materials to produce wood products, including furniture, paper and export wood chips. The timber industry depends on imports for 80% of its timber supply because of prohibitions on logging and the low quality and productivity of existing plantations. In 2015, the Vietnamese forest industry removed roughly 8.7 million m3 of logs domestically (1 percent of the total forest inventory), though domestic removals have increased 13.3 percent annually from 2008-2015 (Figure 4). 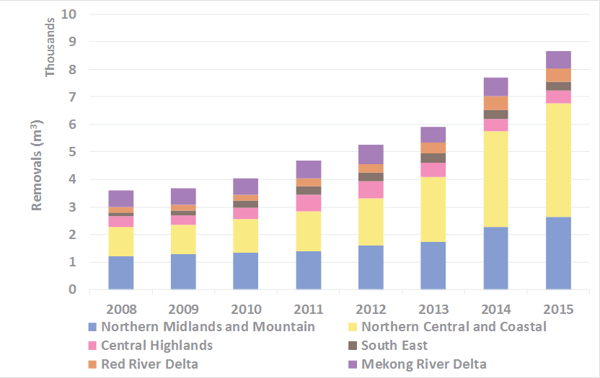 Vietnam is a major exporter of furniture, wood chips and, in more recent years, wood pellets. The solid wood manufacturing sector includes about 3,000 enterprises, of which 95 percent are privately-owned. Most of these manufacturing operations are small- and medium-sized, and over 90 percent of the wood pellet facilities in the country use a wood waste stream derived from these operations. The low-cost labor force, cheap raw material and distance to Asian wood pellet or chip importers give Vietnam a competitive advantage over many other global regions.

As shown in Figure 5, Vietnam increased its annual export of wood pellets to both Japan and South Korea between 2014 and 2016. While a larger quantity of chips has been exported to Japan, the annual export of chips to both countries has fluctuated over this same period. With access to inexpensive wood raw materials and a substantial shipping advantage, Vietnam provides the lowest-cost option for wood pellet volumes at between $95 and $120 per delivered metric ton. Wood chips are also a low-cost option with volumes between $140 and $155 per delivered dry metric ton ($70 and $80 per delivered green metric ton). 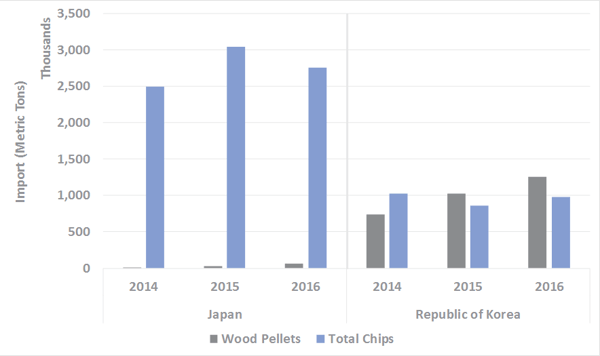 Figure 5 Import Wood Pellet and Chips from Vietnam to Japan and Republic of Korea (Metric Tons), 2014 - 2016

The following table shows the cost components associated with producing and exporting pellets, as well as both green and dry wood chips from Vietnam to ports in East Asia. Under current conditions, the costs for exporting these materials to East Asia from Vietnam are the lowest in comparison to the five other regions covered in our series on this subject (US South, US PNW, BC, Brazil and Chile). Although wood pellet quality is an underlying issue for some East Asian consumers, Vietnam has a clear advantage in wood raw materials and transportation costs as a supplier. 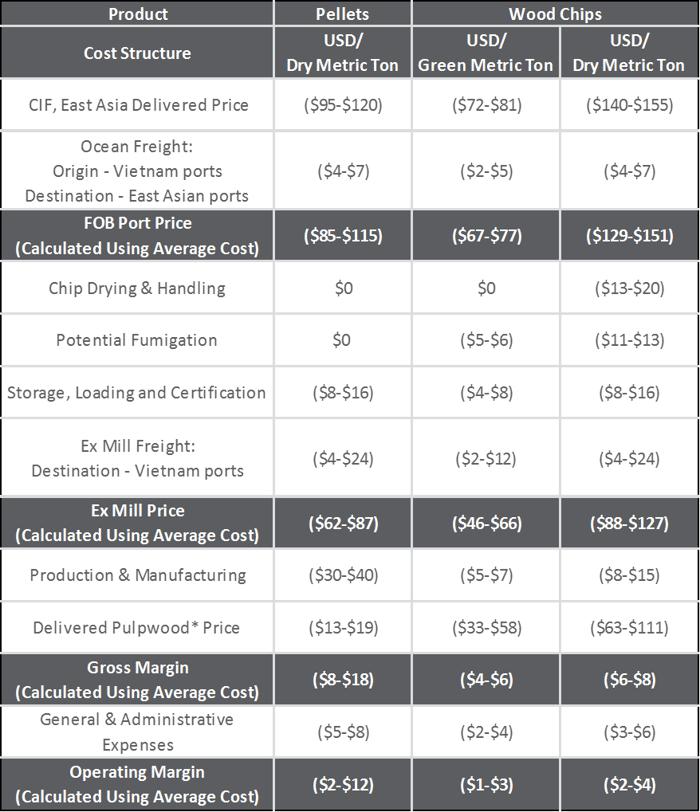