Why Lumber Prices Are Falling--Summer 2015

Why Lumber Prices Are Falling--Summer 2015

Lumber prices have taken a dive this summer, falling 21% from a February high of $380 per MBF to an August low of $307 per MBF (Figure 1). Composite prices are near the lowest level they have been in three years. This reversal is a result of several market forces that have collectively put downward pressure on prices. 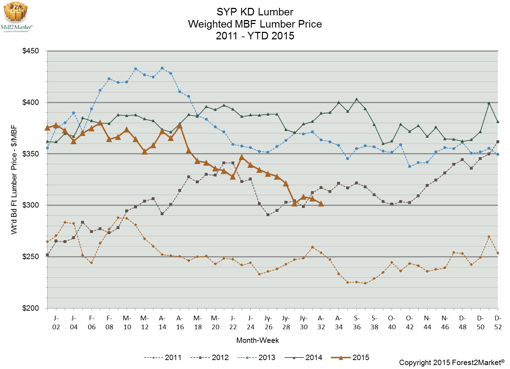 1. Prices began climbing in 2012 as the housing market started to recover. Because a significant amount of sawmill capacity was shuttered during the recession, supply was constrained (mostly due to lack of kiln capacity) and prices increased. As more capacity came online, however, this pattern had to shift.

3. Because of the currency exchange rate—the Canadian loonie is at an 11-year low against the US dollar—imports from Canada are flowing across the border as less expensive Canadian lumber has the market advantage. Domestic producers have been forced to lower their prices to remain competitive.

6. Wholesalers, cautious in the absence of strong market indicators, are buying conservatively.

Prices are unlikely to recover this fall or winter, as the recent devaluation of the Chinese yuan will continue to erode US positions in export markets, and the US dollar relative to the Canadian loonie will remain strong, pulling imports across the border. Lower inventory or a stellar single-family start number may put some short-term upward pressure on price, but neither of these is likely to be strong enough to completely overcome the currency issues at play.

Lumber Prices
Softwood Lumber Prices Tumble 40%; Is Another Rally on the Horizon?
The volatile North American softwood lumber market continues to keep us all guessing as we enter mid-2Q2022. After...
END_OF_DOCUMENT_TOKEN_TO_BE_REPLACED

Log Markets
How Do Lumber Producers Determine Log Value?
The red-hot softwood lumber market has garnered a lot of attention over the last two years. Inquiring minds from Main...
END_OF_DOCUMENT_TOKEN_TO_BE_REPLACED